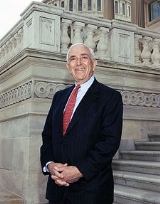 Overview
Frank Raleigh Lautenberg (ˈlɔːtənbɜrɡ; born January 23, 1924) is the senior United States Senator
United States Senate
The United States Senate is the upper house of the bicameral legislature of the United States, and together with the United States House of Representatives comprises the United States Congress. The composition and powers of the Senate are established in Article One of the U.S. Constitution. Each...
from New Jersey
New Jersey
New Jersey is a state in the Northeastern and Middle Atlantic regions of the United States. , its population was 8,791,894. It is bordered on the north and east by the state of New York, on the southeast and south by the Atlantic Ocean, on the west by Pennsylvania and on the southwest by Delaware...
and a member of the Democratic Party
Democratic Party (United States)
The Democratic Party is one of two major contemporary political parties in the United States, along with the Republican Party. The party's socially liberal and progressive platform is largely considered center-left in the U.S. political spectrum. The party has the lengthiest record of continuous...
. Previously, he was the Chairman and Chief Executive Officer (CEO) of Automatic Data Processing, Inc
Automatic Data Processing
Automatic Data Processing, Inc. Automatic Data Processing, Inc. with about $10 billion in revenues and approximately 545,000 clients, is a provider of business outsourcing solutions. ADP offers a range of human resource, payroll, tax and benefits administration solutions...
.
Lautenberg was born in Paterson, New Jersey
Paterson, New Jersey
Paterson is a city serving as the county seat of Passaic County, New Jersey, United States. As of the 2010 United States Census, its population was 146,199, rendering it New Jersey's third largest city and one of the largest cities in the New York City Metropolitan Area, despite a decrease of 3,023...
, to Sam and Mollie Lautenberg, impoverished Jewish immigrants from Poland
Poland
Poland , officially the Republic of Poland , is a country in Central Europe bordered by Germany to the west; the Czech Republic and Slovakia to the south; Ukraine, Belarus and Lithuania to the east; and the Baltic Sea and Kaliningrad Oblast, a Russian exclave, to the north...
and Russia
Russia
Russia or , officially known as both Russia and the Russian Federation , is a country in northern Eurasia. It is a federal semi-presidential republic, comprising 83 federal subjects...
who had arrived in the United States as infants. When Lautenberg was 19, his father, Sam, who worked in silk mills, sold coal, farmed and once ran a tavern, died of cancer.
x