Encyclopedia
Frank C. Erwin, Jr. Special Events Center, commonly known as Frank Erwin Center or UT Erwin Center, is a multi-purpose arena
Arena
An arena is an enclosed area, often circular or oval-shaped, designed to showcase theater, musical performances, or sporting events. It is composed of a large open space surrounded on most or all sides by tiered seating for spectators. The key feature of an arena is that the event space is the...
on the campus
Campus
A campus is traditionally the land on which a college or university and related institutional buildings are situated. Usually a campus includes libraries, lecture halls, residence halls and park-like settings...
of The University of Texas at Austin
University of Texas at Austin
The University of Texas at Austin is a state research university located in Austin, Texas, USA, and is the flagship institution of the The University of Texas System. Founded in 1883, its campus is located approximately from the Texas State Capitol in Austin...
. It is also sometimes referred to as "The Drum" or "The Superdrum", owing to its drum-like appearance from outside (not to be confused with Big Bertha
Big Bertha (drum)
Big Bertha is a bass drum used by the Longhorn Band of The University of Texas at Austin. The Big Bertha name was chosen to evoke the famous German Big Bertha howitzer.-Description:...
, the large bass drum used by the University of Texas marching band). The facility is primarily the home court for the UT men's and women's basketball
Basketball
Basketball is a team sport in which two teams of five players try to score points by throwing or "shooting" a ball through the top of a basketball hoop while following a set of rules...
programs.

The center, intended to replace Gregory Gymnasium
Gregory Gymnasium
Gregory Gymnasium is the 4,400-seat current home of the University of Texas Longhorn Women's Volleyball team, and former home of the Longhorn Basketball and Swimming teams. The basketball teams moved out in 1977 to the Erwin Center....
, cost $34 million to build in 1977. The first event to play at the Center was a UT basketball game which occurred on November 29, 1977 http://www.uterwincenter.com/applause/2007/mar07ap/erc30.html UT began renovations of the center in 2001 and finished in 2003. Renovations included: Life safety upgrades, new concession stands and restrooms, addition of 28 suites, new scoreboard and indoor electronic video signs, addition of outdoor electronic video signs, and Lone Star Room (reception hall) renovations. The building is named for former UT Board of Regents member Frank Erwin, who attended the The University of Texas and was a member of the same fraternity, Kappa Sigma
Kappa Sigma
Kappa Sigma , commonly nicknamed Kappa Sig, is an international fraternity with currently 282 active chapters and colonies in North America. Kappa Sigma has initiated more than 240,000 men on college campuses throughout the United States and Canada. Today, the Fraternity has over 175,000 living...
, as several other prominent alumni who have had buildings at the University named after them (such as Beauford Jester, Denton Cooley
Denton Cooley
Denton Arthur Cooley is an American heart surgeon famous for performing the first implantation of a total artificial heart. Cooley is also founder and surgeon in-chief of the Texas Heart Institute, chief of Cardiovascular Surgery at St...
, William Hogg and Harry Huntt Ransom). Originally known as the Special Events Center, the facility was renamed in 1980 to honor Erwin, who had died that same year. The University has been in recent discussions about selling the naming rights for the Erwin Center.

A two-level layout (the lower arena and upper mezzanine) accommodates up to 16,755 spectators. The outer ring of the arena averages around 20 rows deep, while the mezzanine is slightly deeper at around 24 rows. The size of the arena's inner ring is highly dependent on the event being hosted.

Located right next to downtown Austin, Texas
Texas
Texas is the second largest U.S. state by both area and population, and the largest state by area in the contiguous United States.The name, based on the Caddo word "Tejas" meaning "friends" or "allies", was applied by the Spanish to the Caddo themselves and to the region of their settlement in...
, The Erwin Center is generally accepted to be Austin's current premier venue for large public and private events. The center holds many diverse events ranging from concerts to wrestling events and private banquets. The Erwin Center also hosts the semifinals and finals of the University Interscholastic League
University Interscholastic League
The University Interscholastic League is an organization that creates rules for and administers almost all athletic, music, and academic contests for public primary and secondary schools in the American state of Texas....
boys' and girls' basketball playoffs in all five classifications. The Erwin Center is set to host the United States vs. Spain quarterfinal matches for the 2011 Davis Cup World Group
2011 Davis Cup World Group
The World Group is the highest level of Davis Cup competition in 2011. The first round losers go into the Davis Cup World Group Play-offs while the winners progress to the quarterfinals...
. 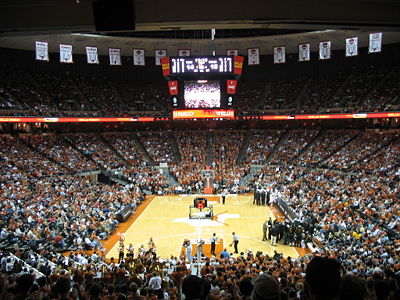