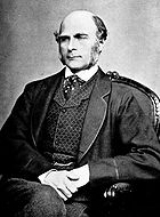 Overview
Sir Francis Galton /ˈfrɑːnsɪs ˈgɔːltn̩/  FRS (16 February 1822 – 17 January 1911), cousin of Douglas Strutt Galton
Douglas Strutt Galton
Sir Douglas Strutt Galton KCB, GCB, F.R.S., MStJ, Chevalier of the Légion d'Honneur, DCL, LLD was a British engineer.-Education and early life:...
, half-cousin of Charles Darwin
Charles Darwin
Charles Robert Darwin FRS was an English naturalist. He established that all species of life have descended over time from common ancestry, and proposed the scientific theory that this branching pattern of evolution resulted from a process that he called natural selection.He published his theory...
, was an English
England
England is a country that is part of the United Kingdom. It shares land borders with Scotland to the north and Wales to the west; the Irish Sea is to the north west, the Celtic Sea to the south west, with the North Sea to the east and the English Channel to the south separating it from continental...
Victorian
Victorian era
The Victorian era of British history was the period of Queen Victoria's reign from 20 June 1837 until her death on 22 January 1901. It was a long period of peace, prosperity, refined sensibilities and national self-confidence...
polymath
Polymath
A polymath is a person whose expertise spans a significant number of different subject areas. In less formal terms, a polymath may simply be someone who is very knowledgeable...
: anthropologist
Anthropology
Anthropology is the study of humanity. It has origins in the humanities, the natural sciences, and the social sciences. The term "anthropology" is from the Greek anthrōpos , "man", understood to mean mankind or humanity, and -logia , "discourse" or "study", and was first used in 1501 by German...
, eugenicist
Eugenics
Eugenics is the "applied science or the bio-social movement which advocates the use of practices aimed at improving the genetic composition of a population", usually referring to human populations. The origins of the concept of eugenics began with certain interpretations of Mendelian inheritance,...
, tropical
Tropics
The tropics is a region of the Earth surrounding the Equator. It is limited in latitude by the Tropic of Cancer in the northern hemisphere at approximately  N and the Tropic of Capricorn in the southern hemisphere at  S; these latitudes correspond to the axial tilt of the Earth...
explorer
Exploration
Exploration is the act of searching or traveling around a terrain for the purpose of discovery of resources or information. Exploration occurs in all non-sessile animal species, including humans...
, geographer
Geographer
A geographer is a scholar whose area of study is geography, the study of Earth's natural environment and human society.Although geographers are historically known as people who make maps, map making is actually the field of study of cartography, a subset of geography...
, inventor
Invention
An invention is a novel composition, device, or process. An invention may be derived from a pre-existing model or idea, or it could be independently conceived, in which case it may be a radical breakthrough. In addition, there is cultural invention, which is an innovative set of useful social...
, meteorologist
Meteorology
Meteorology is the interdisciplinary scientific study of the atmosphere. Studies in the field stretch back millennia, though significant progress in meteorology did not occur until the 18th century. The 19th century saw breakthroughs occur after observing networks developed across several countries...
, proto-geneticist
Geneticist
A geneticist is a biologist who studies genetics, the science of genes, heredity, and variation of organisms. A geneticist can be employed as a researcher or lecturer. Some geneticists perform experiments and analyze data to interpret the inheritance of skills. A geneticist is also a Consultant or...
, psychometrician
Psychometrics
Psychometrics is the field of study concerned with the theory and technique of psychological measurement, which includes the measurement of knowledge, abilities, attitudes, personality traits, and educational measurement...
, and statistician
Statistician
A statistician is someone who works with theoretical or applied statistics. The profession exists in both the private and public sectors. The core of that work is to measure, interpret, and describe the world and human activity patterns within it...
. He was knighted in 1909.

Galton had a prolific intellect, and produced over 340 papers and books throughout his lifetime. He also created the statistical concept of correlation
Correlation
In statistics, dependence refers to any statistical relationship between two random variables or two sets of data. Correlation refers to any of a broad class of statistical relationships involving dependence....
and widely promoted regression toward the mean
Regression toward the mean
In statistics, regression toward the mean is the phenomenon that if a variable is extreme on its first measurement, it will tend to be closer to the average on a second measurement, and—a fact that may superficially seem paradoxical—if it is extreme on a second measurement, will tend...
. He was the first to apply statistical methods to the study of human differences and inheritance of intelligence
Inheritance of intelligence
The study of the heritability of IQ investigates the relative importance of genetics and environment for variation in intelligence quotient in a population...
, and introduced the use of questionnaires and survey
Statistical survey
Survey methodology is the field that studies surveys, that is, the sample of individuals from a population with a view towards making statistical inferences about the population using the sample. Polls about public opinion, such as political beliefs, are reported in the news media in democracies....
s for collecting data on human communities, which he needed for genealogical and biographical works and for his anthropometric studies.

What was something strange, odd and or different about him?

I read in my statistics text that Galton wrote a paper on receiving messages from the stars. I am interested in finding a copy of that paper, my inter...
More

One of the effects of civilization is to diminish the rigour of the application of the law of natural selection. It preserves weakly lives that would have perished in barbarous lands.

There is a steady check in an old civilisation upon the fertility of the abler classes: the improvident and unambitious are those who chiefly keep up the breed. So the race gradually deteriorates, becoming in each successive generation less fit for a high civilisation.

I have already spoken in Hereditary Genius of the large effects of religious persecution in comparatively recent years, on the natural character of races, and shall not say more about it here; but it must not be omitted from the list of steady influences continuing through ancient historical times down, in some degree, to the present day, in destroying the self-reliant, and therefore the nobler races of men.

A really intelligent nation might be held together by far stronger forces than are derived from the purely gregarious instincts. A nation need not be a mob of slaves, clinging to one another through fear, and for the most part incapable of self-government, and begging to be led; but it might consist of vigorous self-reliant men, knit to one another by innumerable ties, into a strong, tense, and elastic organisation.