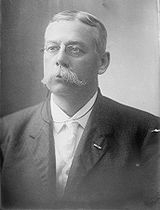 Following the Civil War, Warren engaged in farming and stock-raising in Massachusetts before moving to Wyoming (then part of the Territory of Dakota) in 1868. Settling in Cheyenne
Cheyenne, Wyoming
Cheyenne is the capital and most populous city of the U.S. state of Wyoming and the county seat of Laramie County. It is the principal city of the Cheyenne, Wyoming, Metropolitan Statistical Area which encompasses all of Laramie County. The population is 59,466 at the 2010 census. Cheyenne is the...
, Warren engaged in real estate
Real estate
In general use, esp. North American, 'real estate' is taken to mean "Property consisting of land and the buildings on it, along with its natural resources such as crops, minerals, or water; immovable property of this nature; an interest vested in this; an item of real property; buildings or...
, mercantile business, livestock
Livestock
Livestock refers to one or more domesticated animals raised in an agricultural setting to produce commodities such as food, fiber and labor. The term "livestock" as used in this article does not include poultry or farmed fish; however the inclusion of these, especially poultry, within the meaning...
raising and the establishment of Cheyenne's first lighting
Lighting
Lighting or illumination is the deliberate application of light to achieve some practical or aesthetic effect. Lighting includes the use of both artificial light sources such as lamps and light fixtures, as well as natural illumination by capturing daylight...
system, becoming quite wealthy.

Warren's political work included: Member, Wyoming Territorial Senate
Wyoming Senate
The Wyoming Senate is the upper house of the Wyoming State Legislature. There are 30 Senators in the Senate, representing an equal amount of constituencies across Wyoming, each with a population of at least 17,000. The Senate meets at the Wyoming State Capitol in Cheyenne.Members of the Senate...
(1873–1874, 1884–1885), serving as Senate President; Member, Cheyenne City Council
City council
A city council or town council is the legislative body that governs a city, town, municipality or local government area.-Australia & NZ:Because of the differences in legislation between the States, the exact definition of a City Council varies...
(1873–1874); Treasurer
Treasurer
A treasurer is the person responsible for running the treasury of an organization. The adjective for a treasurer is normally "tresorial". The adjective "treasurial" normally means pertaining to a treasury, rather than the treasurer.-Government:...
of Wyoming (1876, 1879, 1882, 1884); and Mayor
Mayor
In many countries, a Mayor is the highest ranking officer in the municipal government of a town or a large urban city....
of Cheyenne (1885).

In February 1885, Warren was appointed Governor
Governor
A governor is a governing official, usually the executive of a non-sovereign level of government, ranking under the head of state...
of the Territory of Wyoming by President Chester A. Arthur
Chester A. Arthur
Chester Alan Arthur was the 21st President of the United States . Becoming President after the assassination of President James A. Garfield, Arthur struggled to overcome suspicions of his beginnings as a politician from the New York City Republican machine, succeeding at that task by embracing...
, although he was removed by Democratic
Democratic Party (United States)
The Democratic Party is one of two major contemporary political parties in the United States, along with the Republican Party. The party's socially liberal and progressive platform is largely considered center-left in the U.S. political spectrum. The party has the lengthiest record of continuous...
President Grover Cleveland
Grover Cleveland
Stephen Grover Cleveland was the 22nd and 24th president of the United States. Cleveland is the only president to serve two non-consecutive terms and therefore is the only individual to be counted twice in the numbering of the presidents...
in November 1886. He was reappointed by President Benjamin Harrison
Benjamin Harrison
Benjamin Harrison was the 23rd President of the United States . Harrison, a grandson of President William Henry Harrison, was born in North Bend, Ohio, and moved to Indianapolis, Indiana at age 21, eventually becoming a prominent politician there...
in March 1889 and served until 1890, when he was elected first Governor of Wyoming (September–November 1890).

F. E. Warren Air Force Base in Cheyenne, Wyoming is named after Warren. Additionally, Warren's daughter married then-Captain John J. Pershing
John J. Pershing
John Joseph "Black Jack" Pershing, GCB , was a general officer in the United States Army who led the American Expeditionary Forces in World War I...
in 1905. Several years later, President Theodore Roosevelt
Theodore Roosevelt
Theodore "Teddy" Roosevelt was the 26th President of the United States . He is noted for his exuberant personality, range of interests and achievements, and his leadership of the Progressive Movement, as well as his "cowboy" persona and robust masculinity...
promoted Pershing from captain to Brigadier General
Brigadier general (United States)
A brigadier general in the United States Army, Air Force, and Marine Corps, is a one-star general officer, with the pay grade of O-7. Brigadier general ranks above a colonel and below major general. Brigadier general is equivalent to the rank of rear admiral in the other uniformed...
over 900 senior officers. Pershing's wife and three daughters were later killed during a fire at the Presidio
Presidio of San Francisco
The Presidio of San Francisco is a park on the northern tip of the San Francisco Peninsula in San Francisco, California, within the Golden Gate National Recreation Area...
in San Francisco. Warren was also the first senator to hire a female staffer and, as Appropriations Chairman during World War I
World War I
World War I , which was predominantly called the World War or the Great War from its occurrence until 1939, and the First World War or World War I thereafter, was a major war centred in Europe that began on 28 July 1914 and lasted until 11 November 1918...
, he was instrumental in funding the American efforts.