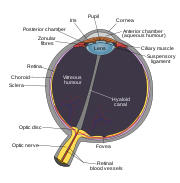 The foveal system of the human eye is the only part of the retina
Retina
The vertebrate retina is a light-sensitive tissue lining the inner surface of the eye. The optics of the eye create an image of the visual world on the retina, which serves much the same function as the film in a camera. Light striking the retina initiates a cascade of chemical and electrical...
that permits 100% visual acuity. The line-of-sight is a virtual line connecting the fovea
Fovea
The fovea centralis, also generally known as the fovea , is a part of the eye, located in the center of the macula region of the retina....
with a fixation
Fixation
Fixation may refer to the following:In science:*Fixation , the state in which an individual becomes obsessed with an attachment to another human, an animal, or an inanimate object...
point in the outside world.

Leonardo DaVinci, (1452-1519) was the first person known in Europe to recognize the special optical qualities of the eye. He derived his insights partly through introspection but mainly through a process that could be described as optical modelling. Based on dissection of the human eye he made experiments with water-filled crystal balls. He wrote "The function of the human eye, ... was described by a large number of authors in a certain way. But I found it to be completely different."

The modern diagram to the right shows that the fovea is a sort of pit. The Latin word fovea actually means pitfall.
The source of this article is wikipedia, the free encyclopedia.  The text of this article is licensed under the GFDL.