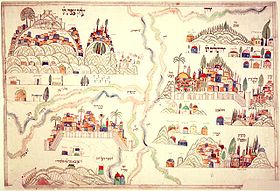 The Four Holy Cities , is the collective term in Jewish
Jews
The Jews , also known as the Jewish people, are a nation and ethnoreligious group originating in the Israelites or Hebrews of the Ancient Near East. The Jewish ethnicity, nationality, and religion are strongly interrelated, as Judaism is the traditional faith of the Jewish nation...
tradition applied to the cities of Jerusalem, Hebron
Hebron
Hebron , is located in the southern West Bank, south of Jerusalem. Nestled in the Judean Mountains, it lies 930 meters above sea level. It is the largest city in the West Bank and home to around 165,000 Palestinians, and over 500 Jewish settlers concentrated in and around the old quarter...
, Tiberias, and Safed
Safed
Safed , is a city in the Northern District of Israel. Located at an elevation of , Safed is the highest city in the Galilee and of Israel. Due to its high elevation, Safed experiences warm summers and cold, often snowy, winters...
: "Since the sixteenth century the holiness of Palestine
Palestine
Palestine is a conventional name, among others, used to describe the geographic region between the Mediterranean Sea and the Jordan River, and various adjoining lands....
, especially for burial, has been almost wholly transferred to four cities—Jerusalem, Hebron, Tiberias, and Safed."