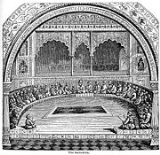 Overview
The Sanhedrin was an assembly of twenty-three judges appointed in every city in the Biblical Land of Israel
Land of Israel
The Land of Israel is the Biblical name for the territory roughly corresponding to the area encompassed by the Southern Levant, also known as Canaan and Palestine, Promised Land and Holy Land. The belief that the area is a God-given homeland of the Jewish people is based on the narrative of the...
.

The Great Sanhedrin was the supreme court
Supreme court
A supreme court is the highest court within the hierarchy of many legal jurisdictions. Other descriptions for such courts include court of last resort, instance court, judgment court, high court, or apex court...
of ancient Israel made of 71 members. The Great Sanhedrin was made up of a Chief/Prince/Leader called Nasi
Nasi
Nāśī’ is a Hebrew title meaning prince in Biblical Hebrew, Prince in Mishnaic Hebrew, or president in Modern Hebrew.-Genesis and Ancient Israel:...
(at some times this position may have been held by the Kohen Gadol
Kohen Gadol
The High Priest was the chief religious official of Israelite religion and of classical Judaism from the rise of the Israelite nation until the destruction of the Second Temple of Jerusalem...
or the High Priest), a vice chief justice (Av Beit Din
Av Beit Din
Av Beit Din, Av Beis Din, or Abh Beyth Diyn . was the second-highest ranking member of the Sanhedrin during the Second Commonwealth period. He presided over the Sanhedrin in the absence of the Nasi, and was the chief of the Sanhedrin when it sat as a criminal court...
), and sixty-nine general members.

Was Paul the apostle a member of the sanhedrin before his conversion and did you have to be married to be in the sanhedrin?
More
x