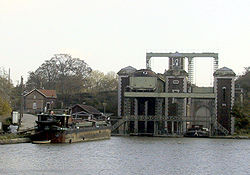 The Fontinettes Boat Lift (French: Ascenseur des Fontinettes) was built in the late 19th century in Arques
Arques, Pas-de-Calais
Arques is a commune in the Pas-de-Calais department in northern France.-Geography:Arques is situated in the middle of the region 40 km from Calais and Dunkerque, and 45 km from Boulogne-sur-Mer. It lies on the border between the departments of Pas-de-Calais and Nord.The town is crossed by...
, near Saint-Omer
Saint-Omer
Saint-Omer , a commune and sub-prefecture of the Pas-de-Calais department west-northwest of Lille on the railway to Calais. The town is named after Saint Audomar, who brought Christianity to the area....
in the Pas-de-Calais to connect the River Aa
Aa River (France)
The Aa is an 89 km long river in northern France. Its source is near the village Bourthes. It flows through the following départements and cities:* Pas-de-Calais: Saint-Omer.* Nord: Gravelines....
and the Neufossé Canal in France
France
The French Republic , The French Republic , The French Republic , (commonly known as France , is a unitary semi-presidential republic in Western Europe with several overseas territories and islands located on other continents and in the Indian, Pacific, and Atlantic oceans. Metropolitan France...
.

It was designed to avoid the need to use five locks which took some 90 minutes to change height by 13 meters. It was inspired by the similar Anderton Boat Lift
Anderton Boat Lift
The Anderton Boat Lift near the village of Anderton, Cheshire, in north-west England provides a vertical link between two navigable waterways: the River Weaver and the Trent and Mersey Canal....
built in 1875 in Cheshire
Cheshire
Cheshire is a ceremonial county in North West England. Cheshire's county town is the city of Chester, although its largest town is Warrington. Other major towns include Widnes, Congleton, Crewe, Ellesmere Port, Runcorn, Macclesfield, Winsford, Northwich, and Wilmslow...
, England.

It consists of two cassions each weighing 792 tonnes, including the lifting piston of 90 tonnes. Doors on the caissons and on the canal end are hydraulically powered, and sealing is effected by inflatable seals.
In operation, the upper cassion is lowered and 64 tonnes of extra water is added. It is then raised again by hydraulic pressure from an accumulator, and when released, the two cassions exchange position. Six men were required to operate the lift, the balancing operation took only 5 minutes.
All power, including to the workshop, came from water turbines.
The Boat Lift was built between 1885 and 1888 and worked until 1967. It was then replaced by a big, single lock built further upstream. The lift was rescued from demolition by a local conservation group and guided tours are available during the summer months for a small fee.