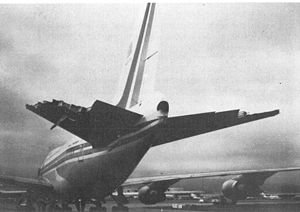 Flight envelope protection is a human machine interface extension of an aircraft’s control
Aircraft flight control systems
A conventional fixed-wing aircraft flight control system consists of flight control surfaces, the respective cockpit controls, connecting linkages, and the necessary operating mechanisms to control an aircraft's direction in flight...
system that prevents the pilot of an aircraft from making control commands that would force the aircraft to exceed its structural and aerodynamic operating limits. It is used in some form in all modern commercial fly-by-wire
Fly-by-wire
Fly-by-wire is a system that replaces the conventional manual flight controls of an aircraft with an electronic interface. The movements of flight controls are converted to electronic signals transmitted by wires , and flight control computers determine how to move the actuators at each control...
aircraft. Its advantage is that it restricts pilots in emergency situations so they can react quickly without endangering the safety of their aircraft.

Aircraft have a flight envelope
Flight envelope
In aerodynamics, the flight envelope or performance envelope of an aircraft refers to the capabilities of a design in terms of airspeed and load factor or altitude. The term is somewhat loosely applied, and can also refer to other measurements such as maneuverability...
that describes its safe performance limits in regard to such things as minimum and maximum operating speeds, and its operating structural strength. Flight envelope protection calculates that flight envelope (and adds a margin of safety) and uses this information to stop pilots
Aviator
An aviator is a person who flies an aircraft. The first recorded use of the term was in 1887, as a variation of 'aviation', from the Latin avis , coined in 1863 by G. de la Landelle in Aviation Ou Navigation Aérienne...
from making control inputs that would put the aircraft outside that flight envelope. For example, if the pilot uses the rearward side-stick
Side-stick
A side-stick or sidestick controller is an aircraft control column that is located on the side console of the pilot, usually on the righthand side, or outboard on a two-seat flightdeck...
to pitch the aircraft nose up, the control computers creating the flight envelope protection will prevent the pilot pitching the aircraft beyond the stalling
Stall (flight)
In fluid dynamics, a stall is a reduction in the lift coefficient generated by a foil as angle of attack increases. This occurs when the critical angle of attack of the foil is exceeded...
angle of attack
Angle of attack
Angle of attack is a term used in fluid dynamics to describe the angle between a reference line on a lifting body and the vector representing the relative motion between the lifting body and the fluid through which it is moving...
. As a result, even if the pilot tried to apply more and more rearward control, the flight envelope protection would cause the aircraft to ignore this command. Flight envelope protection can in this way increase aircraft safety by allowing the pilot to apply in an emergency maximum control forces while not at the same time inadvertently putting the aircraft outside the margins of its operational safety.

Examples of where this might stop air accidents
Aviation accidents and incidents
An aviation accident is defined in the Convention on International Civil Aviation Annex 13 as an occurrence associated with the operation of an aircraft which takes place between the time any person boards the aircraft with the intention of flight and all such persons have disembarked, in which a...
are when it allows a pilot to make a quick evasive maneuver in response to a ground proximity warning system
Ground Proximity Warning System
A ground proximity warning system is a system designed to alert pilots if their aircraft is in immediate danger of flying into the ground or an obstacle. The United States Federal Aviation Administration defines GPWS as a type of terrain awareness warning system...
warning, or in quick response to an approaching aircraft and a potential mid air collision. In this case without a flight envelope protection system, "you would probably hold back from maneuvering as hard as you could for fear of tumbling out of control, or worse. You would have to sneak up on it [2.5 G, the design limit], and when you got there you wouldn't be able to tell, because very few commercial pilots have ever flown 2.5 G. But in the A320
Airbus A320 family
The Airbus A320 family is a family of short- to medium-range, narrow-body, commercial passenger jet airliners manufactured by Airbus Industrie.Airbus was originally a consortium of European aerospace companies, and is now fully owned by EADS. Airbus's name has been Airbus SAS since 2001...
, you wouldn't have to hesitate: you could just slam the controller all the way to the side and instantly get out of there as fast as the plane will take you." Thus the makers of the Airbus argue: "envelope protection doesn't constrain the pilot. It liberates the pilot from uncertainty-and thus enhances safety."

The Airbus A320
Airbus A320 family
The Airbus A320 family is a family of short- to medium-range, narrow-body, commercial passenger jet airliners manufactured by Airbus Industrie.Airbus was originally a consortium of European aerospace companies, and is now fully owned by EADS. Airbus's name has been Airbus SAS since 2001...
was the first commercial aircraft to incorporate full flight-envelope protection into its flight-control software. This was instigated by former Airbus senior vice president for engineering Bernard Ziegler
Bernard Ziegler
Bernard Ziegler is the former Airbus senior vice president for engineering. He is well known for his evangelical zeal for the application of the fly-by-wire system in the Airbuses. He is the son of the former Airbus CEO, Henri Ziegler....
. In the Airbus, the flight envelope protection cannot be overridden completely, although the crew can fly beyond flight envelope limits by selecting an alternate "control law". Boeing in the Boeing 777
Boeing 777
The Boeing 777 is a long-range, wide-body twin-engine jet airliner manufactured by Boeing Commercial Airplanes. It is the world's largest twinjet and is commonly referred to as the "Triple Seven". The aircraft has seating for over 300 passengers and has a range from , depending on model...
has taken a different approach by allowing the crew to override flight envelope limits using excessive force on the flight controls.

One objection raised against flight envelope protection is the incident that happened to China Airlines Flight 006, a Boeing 747SP-09
Boeing 747SP
The Boeing 747SP is a modified version of the Boeing 747 jet airliner which was designed for ultra-long-range flights. The SP stands for "Special Performance". Compared with its predecessor, the 747-100, the 747SP retains its wide-body, four-engine layout, along with its double-deck design, but...
, northwest of San Francisco in 1985. In this flight incident, the crew was forced to overstress (and structurally damage) the horizontal tail surfaces in order to recover from a roll
Aerobatic maneuver
Aerobatic maneuvers are flight paths putting aircraft in unusual attitudes, in air shows, dog fights or competition aerobatics. Aerobatics can be performed by a single aircraft or in formation with several others...
and near-vertical dive. (This had been caused by an automatic disconnect of the autopilot
Autopilot
An autopilot is a mechanical, electrical, or hydraulic system used to guide a vehicle without assistance from a human being. An autopilot can refer specifically to aircraft, self-steering gear for boats, or auto guidance of space craft and missiles...
and incorrect handling of a yaw brought about by an engine flame-out). The pilot recovered control with about 10,000 ft of altitude remaining (from its original high-altitude cruise). But to do that the pilot had to pull the aircraft with an estimated 5.5 G, or more than twice its design limits. If the aircraft had a flight envelope protection system, this recovery could not have been performed. Against this objection, Airbus has responded that an A320 in the situation of Flight 006 "never would have fallen out of the air
in the first place: the envelope protection would have automatically kept it in level flight in spite of the drag of a stalled engine".

FedEx Flight 705, a McDonnell Douglas DC-10
McDonnell Douglas DC-10
The McDonnell Douglas DC-10 is a three-engine widebody jet airliner manufactured by McDonnell Douglas. The DC-10 has range for medium- to long-haul flights, capable of carrying a maximum 380 passengers. Its most distinguishing feature is the two turbofan engines mounted on underwing pylons and a...
-30, was a case of a FedEx
FedEx
FedEx Corporation , originally known as FDX Corporation, is a logistics services company, based in the United States with headquarters in Memphis, Tennessee...
Flight Engineer who, facing a dismissal, attempted to hijack the plane and crash it into FedEx Headquarters in order for his family to collect his life insurance policy. After being attacked and severely injured, the flight crew was able to fight back and land the plane safely. In order to keep the attacker off balance and out of the cockpit the crew had to perform extreme maneuvers, including a barrel roll
Barrel roll
A barrel roll is an aerial maneuver in which an airplane makes a complete rotation on its longitudinal axis while following a helical path, approximately maintaining its original direction. It is sometimes described as "a combination of a loop and a roll"...
and a dive so fast the airplane couldn't measure its speed. Had the crew not been able to exceed the plane's flight envelope, the crew may not have been successful.

American Airlines Flight 587, an Airbus A300
Airbus A300
The Airbus A300 is a short- to medium-range widebody jet airliner. Launched in 1972 as the world's first twin-engined widebody, it was the first product of Airbus Industrie, a consortium of European aerospace companies, wholly owned today by EADS...
, crashed when the vertical stabiliser broke off due to large rudder inputs by the pilot. A flight-envelope protection system could have prevented this crash, though it can still be argued that an override button should be provided for contingencies such as China Airlines Flight 006
China Airlines Flight 006
China Airlines Flight 006 was a daily non-stop flight departing from Taipei at 16:15 and scheduled to arrive at Los Angeles International Airport at 07:00 local time. On February 19, 1985, it was involved in an aircraft upset accident after the No. 4 engine flamed out...
when the pilots are aware of the need to exceed normal limits.
The source of this article is wikipedia, the free encyclopedia.  The text of this article is licensed under the GFDL.