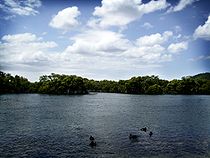 Flat-field correction is a technique used to improve quality in digital imaging
Digital imaging
Digital imaging or digital image acquisition is the creation of digital images, typically from a physical scene. The term is often assumed to imply or include the processing, compression, storage, printing, and display of such images...
. The goal is to remove artifacts from 2-D images that are caused by variations in the pixel-to-pixel sensitivity of the detector and/or by distortions in the optical path. It is a standard calibration procedure in everything from pocket digital camera
Digital camera
A digital camera is a camera that takes video or still photographs, or both, digitally by recording images via an electronic image sensor. It is the main device used in the field of digital photography...
s to giant telescopes.

Flat fielding refers to the process of compensating for different gain
Gain
In electronics, gain is a measure of the ability of a circuit to increase the power or amplitude of a signal from the input to the output. It is usually defined as the mean ratio of the signal output of a system to the signal input of the same system. It may also be defined on a logarithmic scale,...
s and dark currents
Dark current (physics)
In physics and in electronic engineering, dark current is the relatively small electric current that flows through photosensitive devices such as a photomultiplier tube, photodiode, or charge-coupled device even when no photons are entering the device. It is referred to as reverse bias leakage...
in a detector. Once a detector has been appropriately flat-fielded, a uniform signal will create a uniform output (hence flat-field). This then means any further signal is due from the phenomenon being detected and not a systematic error
Systematic error
Systematic errors are biases in measurement which lead to the situation where the mean of many separate measurements differs significantly from the actual value of the measured attribute. All measurements are prone to systematic errors, often of several different types...
.

A flat-field consists of two numbers for each pixel, the pixel's gain and its dark current (or dark frame). The pixel's gain is how the amount of signal given by the detector varies as a function of the amount of light (or equivalent). The gain is almost always a linear variable, as such the gain is given simply as the ratio of the input and output signals. The dark-current is the amount of signal given out by the detector when there is no incident light (hence dark frame). In many detectors this can also be a function of time, for example in astronomical telescopes it is common to take a dark-frame of the same time as the planned light exposure. The gain and dark-frame for optical systems can also be established by using a series of neutral density filter
Neutral density filter
In photography and optics, a neutral density filter or ND filter can be a colorless or grey filter. An ideal neutral density filter reduces and/or modifies intensity of all wavelengths or colors of light equally, giving no changes in hue of color rendition.The purpose of standard photographic...
s to give input/output signal information and applying a least squares fit to obtain the values for the dark current and gain.
The source of this article is wikipedia, the free encyclopedia.  The text of this article is licensed under the GFDL.