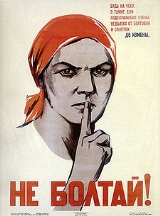 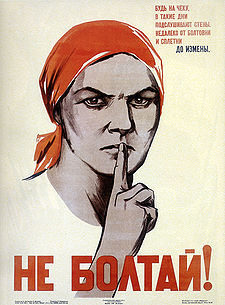 The First Department (Первый отдел, Pervyj Otdel) was in charge of secrecy and political security of the workplace of every enterprise or institution of the Soviet Union
Soviet Union
The Soviet Union , officially the Union of Soviet Socialist Republics , was a constitutionally socialist state that existed in Eurasia between 1922 and 1991....
that dealt with any kind of technical or scientific information (plant
Factory
A factory or manufacturing plant is an industrial building where laborers manufacture goods or supervise machines processing one product into another. Most modern factories have large warehouses or warehouse-like facilities that contain heavy equipment used for assembly line production...
s, R&D institutions, etc.) or had printing capabilities (e.g., publishing houses).

Every branch of the Central Statistical Administration and its successor the State Statistics Committee (Goskomstat
Goskomstat
Goskomstat was the centralised agency dealing with statistics in the Soviet Union. Goskomstat was created in 1987 to replace the Central Statistical Administration. While maintaining the same basic functions in the collection, analysis, and publicationand distribution of state statistics,...
) also had a First Department to control access, distribution, and publication of official economic, population, and social statistics. Copies of especially sensitive documents were numbered and labeled or stamped as secret or “For official use only” (Для служебного пользования). In some cases, the “official use” version of documents mimicked the public use versions in format but provided much more detailed information.

The first departments reported to KGB
KGB
The KGB was the commonly used acronym for the . It was the national security agency of the Soviet Union from 1954 until 1991, and was the premier internal security, intelligence, and secret police organization during that time.The State Security Agency of the Republic of Belarus currently uses the...
and were not subordinated to the management of the enterprise or institution. Among its functions was control of access to information considered state secret, of foreign travel, and of publications. The First Department also kept account of the usage of copying devices (xerographer
Xerography
Xerography is a dry photocopying technique invented by Chester Carlson in 1938, for which he was awarded on October 6, 1942. Carlson originally called his invention electrophotography...
s, printing press
Printing press
A printing press is a device for applying pressure to an inked surface resting upon a print medium , thereby transferring the ink...
es, typewriter
Typewriter
A typewriter is a mechanical or electromechanical device with keys that, when pressed, cause characters to be printed on a medium, usually paper. Typically one character is printed per keypress, and the machine prints the characters by making ink impressions of type elements similar to the pieces...
s, etc.) to prevent unsanctioned copying, including samizdat
Samizdat
Samizdat was a key form of dissident activity across the Soviet bloc in which individuals reproduced censored publications by hand and passed the documents from reader to reader...
.
The source of this article is wikipedia, the free encyclopedia.  The text of this article is licensed under the GFDL.