Encyclopedia
Field ion microscopy is an analytical technique used in materials science
Materials science
Materials science is an interdisciplinary field applying the properties of matter to various areas of science and engineering. This scientific field investigates the relationship between the structure of materials at atomic or molecular scales and their macroscopic properties. It incorporates...
. The field ion microscope is a type of microscope
Microscope
A microscope is an instrument used to see objects that are too small for the naked eye. The science of investigating small objects using such an instrument is called microscopy...
that can be used to image the arrangement of atom
Atom
The atom is a basic unit of matter that consists of a dense central nucleus surrounded by a cloud of negatively charged electrons. The atomic nucleus contains a mix of positively charged protons and electrically neutral neutrons...
s at the surface of a sharp metal tip.
It was the first technique by which individual atoms could be spatially resolved. On October 11, 1955, Muller & Bahadur (Pennsylvania State University) observed individual tungsten (W) atoms on the surface of a sharply pointed W tip by cooling it to 78 K and employing helium as the imaging gas. Muller & Bahadur were the first persons to observe individual atoms directly; to do so, they used an FIM, which Muller had invented in 1951.

In FIM, a sharp (<50 nm tip radius) metal tip is produced and placed in an ultra high vacuum
Ultra high vacuum
Ultra-high vacuum is the vacuum regime characterised by pressures lower than about 10−7 pascal or 100 nanopascals . UHV requires the use of unusual materials in construction and by heating the entire system to 180°C for several hours to remove water and other trace gases which adsorb on the...
chamber, which is backfilled with an imaging gas such as helium
Helium
Helium is the chemical element with atomic number 2 and an atomic weight of 4.002602, which is represented by the symbol He. It is a colorless, odorless, tasteless, non-toxic, inert, monatomic gas that heads the noble gas group in the periodic table...
or neon
Neon
Neon is the chemical element that has the symbol Ne and an atomic number of 10. Although a very common element in the universe, it is rare on Earth. A colorless, inert noble gas under standard conditions, neon gives a distinct reddish-orange glow when used in either low-voltage neon glow lamps or...
. The tip is cooled to cryogenic temperatures (20–100 K). A positive voltage
Voltage
Voltage, otherwise known as electrical potential difference or electric tension is the difference in electric potential between two points — or the difference in electric potential energy per unit charge between two points...
of 5 to 10 kilovolt
Volt
The volt is the SI derived unit for electric potential, electric potential difference, and electromotive force. The volt is named in honor of the Italian physicist Alessandro Volta , who invented the voltaic pile, possibly the first chemical battery.- Definition :A single volt is defined as the...
s is applied to the tip. Gas atoms adsorbed
Adsorption
Adsorption is the adhesion of atoms, ions, biomolecules or molecules of gas, liquid, or dissolved solids to a surface. This process creates a film of the adsorbate on the surface of the adsorbent. It differs from absorption, in which a fluid permeates or is dissolved by a liquid or solid...
on the tip are ionized by the strong electric field
Electric field
In physics, an electric field surrounds electrically charged particles and time-varying magnetic fields. The electric field depicts the force exerted on other electrically charged objects by the electrically charged particle the field is surrounding...
in the vicinity of the tip (thus, "field ionization"), becoming positively charged and being repelled from the tip. The curvature of the surface near the tip causes a natural magnification — ion
Ion
An ion is an atom or molecule in which the total number of electrons is not equal to the total number of protons, giving it a net positive or negative electrical charge. The name was given by physicist Michael Faraday for the substances that allow a current to pass between electrodes in a...
s are repelled in a direction roughly perpendicular to the surface (a "point projection" effect). A detector is placed so as to collect these repelled ions; the image formed from all the collected ions can be of sufficient resolution to image individual atoms on the tip surface.

Unlike conventional microscopes, where the spatial resolution is limited by the wavelength of the particles which are used for imaging, the FIM is a projection type microscope with atomic resolution and an approximate magnification of a few million times.

FIM like Field Emission Microscopy
Field emission microscopy
Field emission microscopy is an analytical technique used in materials science to investigate molecular surface structures and their electronic properties...
(FEM) consists of a sharp sample tip and a fluorescent screen (now replaced by a multichannel plate
Microchannel plate detector
A micro-channel plate is a planar component used for detection of particles and impinging radiation . It is closely related to an electron multiplier, as both intensify single particles or photons by the multiplication of electrons via secondary emission...
) as the key elements. However, there are some essential differences as follows:
Like FEM, the field strength at the tip apex is typically a few V/Å
Ångström
The angstrom or ångström, is a unit of length equal to 1/10,000,000,000 of a meter . Its symbol is the Swedish letter Å....
. The experimental set-up and image formation in FIM is illustrated in the accompanying figures. 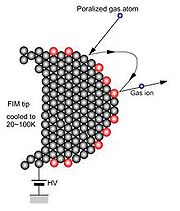 In FIM the presence of a strong field is critical. The imaging gas atoms (He, Ne) near the tip are polarized by the field and since the field is non-uniform the polarized atoms are attracted towards the tip surface. The imaging atoms then lose their kinetic energy
Kinetic energy
The kinetic energy of an object is the energy which it possesses due to its motion.It is defined as the work needed to accelerate a body of a given mass from rest to its stated velocity. Having gained this energy during its acceleration, the body maintains this kinetic energy unless its speed changes...
performing a series of hops and accommodate to the tip temperature. Eventually, the imaging atoms are ionized by tunneling electrons into the surface and the resulting positive ions are accelerated along the field line
Field line
A field line is a locus that is defined by a vector field and a starting location within the field. Field lines are useful for visualizing vector fields, which are otherwise hard to depict...
s to the screen to form a highly magnified image of the sample tip.

In FIM, the ionization
Ionization
Ionization is the process of converting an atom or molecule into an ion by adding or removing charged particles such as electrons or other ions. This is often confused with dissociation. A substance may dissociate without necessarily producing ions. As an example, the molecules of table sugar...
takes place close to the tip, where the field is strongest. The electron that tunnels from the atom is picked up by the tip. There is a critical distance, xc, at which the tunneling probability is a maximum. This distance is typically about 0.4nm. The very high spatial resolution and high contrast for features on the atomic scale arises from the fact that the electric field is enhanced in the vicinity of the surface atoms because of the higher local curvature. The resolution of FIM is limited by the thermal velocity of the imaging ion. Resolution of the order of 1Å (atomic resolution) can be achieved by effective cooling of the tip.

Application of FIM, like FEM, is limited by the materials which can be fabricated in the shape of a sharp tip, can be used in a ultra high vacuum (UHV) environment, and can tolerate the high electrostatic fields. For these reasons, refractory metals
Refractory metals
Refractory metals are a class of metals that are extraordinarily resistant to heat and wear. The expression is mostly used in the context of materials science, metallurgy and engineering. The definition of which elements belong to this group differs...
with high melting temperature (for e.g. W, Mo, Pt, Ir) are conventional objects for FIM experiments. Metal tips for FEM and FIM are prepared by electropolishing
Electropolishing
Electropolishing, also known as electrochemical polishing or electrolytic polishing , is an electrochemical process that removes material from a metallic workpiece. It is used to polish, passivate, and deburr metal parts. It is often described as the reverse of electroplating...
(electrochemical polishing) of thin wires. However, these tips usually contain many asperities. The final preparation procedure involves the in situ removal of these asperities by field evaporation just by raising the tip voltage. Field evaporation is a field induced process which involves the removal of atoms from the surface itself at very high field strengths and typically occurs in the range 2-5 V/Å. The effect of the field in this case is to reduce the effective binding energy of the atom to the surface and to give, in effect, a greatly increased evaporation rate relative to that expected at that temperature at zero fields. This process is self-regulating since the atoms that are at positions of high local curvature, such as adatoms or ledge atoms, are removed preferentially. The tips used in FIM is sharper (tip radius is 100~300 Å) compared to those used in FEM experiments (tip radius ~1000 Å).

FIM has been used to study dynamical behavior of surfaces and the behavior of adatoms
Adatoms
An adatom is an atom that lies on a crystal surface, and can be thought of as the opposite of a surface vacancy. This term is used in surface chemistry, when describing single atoms lying on surfaces and surface roughness. The word is a contraction of "adsorbed atom"...
on surfaces. The problems studied include adsorption
Adsorption
Adsorption is the adhesion of atoms, ions, biomolecules or molecules of gas, liquid, or dissolved solids to a surface. This process creates a film of the adsorbate on the surface of the adsorbent. It differs from absorption, in which a fluid permeates or is dissolved by a liquid or solid...
-desorption
Desorption
Desorption is a phenomenon whereby a substance is released from or through a surface. The process is the opposite of sorption . This occurs in a system being in the state of sorption equilibrium between bulk phase and an adsorbing surface...
phenomena, surface diffusion
Surface diffusion
Surface diffusion is a general process involving the motion of adatoms, molecules, and atomic clusters at solid material surfaces. The process can generally be thought of in terms of particles jumping between adjacent adsorption sites on a surface, as in figure 1...
of adatoms and clusters, adatom-adatom interactions, step motion, equilibrium crystal shape, etc. However there is the possibility of the results being affected by the limited surface area (i.e. edge effects) and by the presence of large electric field.