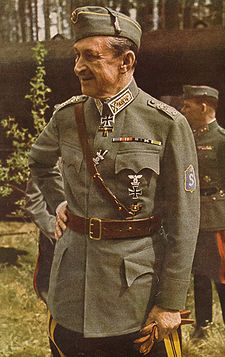 In Finnish Defence Forces
Finnish Defence Forces
The Finnish Defence Forces are responsible for the defence of Finland. It is a cadre army of 15,000, of which 8,900 are professional soldiers , extended with conscripts and reservists such that the standard readiness strength is 34,700 people in uniform...
Field Marshal (Finnish: sotamarsalkka, Swedish: fältmarskalk) is officially not an active military rank
Military rank
Military rank is a system of hierarchical relationships in armed forces or civil institutions organized along military lines. Usually, uniforms denote the bearer's rank by particular insignia affixed to the uniforms...
but an honorary rank that can be bestowed upon 'especially distinguished general
General
A general officer is an officer of high military rank, usually in the army, and in some nations, the air force. The term is widely used by many nations of the world, and when a country uses a different term, there is an equivalent title given....
s'. So far the only holder of this title has been Baron
Baron
Baron is a title of nobility. The word baron comes from Old French baron, itself from Old High German and Latin baro meaning " man, warrior"; it merged with cognate Old English beorn meaning "nobleman"...
Carl Gustaf Emil Mannerheim
Carl Gustaf Emil Mannerheim
Baron Carl Gustaf Emil Mannerheim was the military leader of the Whites in the Finnish Civil War, Commander-in-Chief of Finland's Defence Forces during World War II, Marshal of Finland, and a Finnish statesman. He was Regent of Finland and the sixth President of Finland...
, then Chairman of the Defence Council, who received it on 19 May 1933 by the decision of the State Council
Finnish Council of State
The Cabinet of Finland is the body that directs the Government of Finland. However, in governmental translations to English, the distinction is often blurred between cabinet and government in the wider sense...
. Baron Gustaf Mannerheim (1867-1951) served as Regent 1918-1919 and President of the Republic 1944-1946.

Mannerheim had commanded the White Army in the Finnish Civil War
Finnish Civil War
The Finnish Civil War was a part of the national, political and social turmoil caused by World War I in Europe. The Civil War concerned control and leadership of The Grand Duchy of Finland as it achieved independence from Russia after the October Revolution in Petrograd...
in 1918, and his promotion to field marshal had already been suggested in 1928, the 10th anniversary of the end of the War. Back then the proposal was rejected as 'too warlike' -- and there was also fears that such promotion would prove politically controversial—but Mannerheim was nevertheless given an unofficial marshal's baton
Baton (symbol)
The ceremonial baton is a short, thick stick, carried by select high-ranking military officers as a uniform article. The baton is distinguished from the swagger stick in being thicker and less functional . Unlike a staff of office, a baton is not rested on the ground...
by the Civil War's White veterans. Five years later the political climate was more favourable, and the State Council decided to bestow Mannerheim the rank of field marshal. The decision was kept in secret, and came as a pleasant surprise to Mannerheim. He observed "In a little ultrademocratic country it could seem quite pretentious to indulge in the luxury of a field marshal", but also admitted that it was "not so frightful when the marshal costs the state nothing".

It is not known why field marshal never became a substantive rank rather than honorary one, but this distinction caused Mannerheim some consternation at the time. He had to pay a substantial stamp duty
Stamp duty
Stamp duty is a tax that is levied on documents. Historically, this included the majority of legal documents such as cheques, receipts, military commissions, marriage licences and land transactions. A physical stamp had to be attached to or impressed upon the document to denote that stamp duty...
of 4000 Finnish mark
Finnish mark
The Finnish markka was the currency of Finland from 1860 until 28 February 2002, when it ceased to be legal tender. The markka was replaced by the euro , which had been introduced, in cash form, on 1 January 2002....
s. Mannerheim's secretary at the Defence Council, the then Lieutenant Colonel
Lieutenant colonel
Lieutenant colonel is a rank of commissioned officer in the armies and most marine forces and some air forces of the world, typically ranking above a major and below a colonel. The rank of lieutenant colonel is often shortened to simply "colonel" in conversation and in unofficial correspondence...
Aksel Airo
Aksel Airo
Aksel Fredrik Airo was a Finnish lieutenant general and main strategic planner during the Winter War and the Continuation War. He was the virtual second-in-command of the Finnish army under Field Marshal C.G.E. Mannerheim....
tried to make the Defence Forces or Ministry of Defence foot the bill. It is customary that the organization that has originally put a person forward for the title, pays the stamp duty that comes with it. But in this case no such payer could be found and finally Airo had to present the bill to Mannerheim, who commented wryly: "It's good they didn't make a bigger chief out of me." Mannerheim was also initially concerned that as field marshal was not an official rank, he was no longer in the Defence Forces service, but Mannerheim was then assured that he remained in the Finnish Army
Finnish Army
The Finnish Army is the land forces branch of the Finnish Defence Forces.Today's Army is divided into six branches: the infantry , field artillery, anti-aircraft artillery, engineers, signals, and materiel troops.-History of the Finnish Army:Between 1809 and 1917 Finland was an autonomous part of...
officer lists as a general of cavalry
General
A general officer is an officer of high military rank, usually in the army, and in some nations, the air force. The term is widely used by many nations of the world, and when a country uses a different term, there is an equivalent title given....
(ratsuväenkenraali, his substantive rank since 1918).

Mannerheim received the field marshal's title three days after the 15th anniversary of the end of the Civil War, choosing not to receive the title on the anniversary on 16 May, because he did not want to aggravate the wounds of the War. On this occasion Mannerheim was also given a new, official marshal's baton, but he still preferred to use the old, unofficial one, because it was lighter.

In practice field marshal was treated like a military rank. Mannerheim, in co-operation with artist and author Aarno Karimo designed a new rank insignia consisting of the three heraldic lions
Coat of arms of Finland
The coat of arms of Finland is a crowned lion on a red field, the right forepaw replaced with an armoured hand brandishing a sword, trampling on a saber with the hindpaws...
of a full general and crossed marshal's batons .

At the time when Finland
Finland
Finland , officially the Republic of Finland, is a Nordic country situated in the Fennoscandian region of Northern Europe. It is bordered by Sweden in the west, Norway in the north and Russia in the east, while Estonia lies to its south across the Gulf of Finland.Around 5.4 million people reside...
was under Swedish
Sweden
Sweden , officially the Kingdom of Sweden , is a Nordic country on the Scandinavian Peninsula in Northern Europe. Sweden borders with Norway and Finland and is connected to Denmark by a bridge-tunnel across the Öresund....
rule (before the War of Finland in 1808-1809), a number of Finnish-born men reached the corresponding rank of Fältmarskalk
Fältmarskalk
Fältmarskalk was a Swedish military rank equivalent to present day NATO OF-10, and from the end of the 16th century to 1824, 77 persons have held this rank, sometimes written as General Fältmarskalk...
.
The source of this article is wikipedia, the free encyclopedia.  The text of this article is licensed under the GFDL.