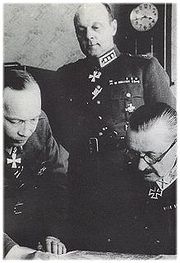 Aksel Fredrik Airo was a Finnish
Finland
Finland , officially the Republic of Finland, is a Nordic country situated in the Fennoscandian region of Northern Europe. It is bordered by Sweden in the west, Norway in the north and Russia in the east, while Estonia lies to its south across the Gulf of Finland.Around 5.4 million people reside...
lieutenant general
Lieutenant General
Lieutenant General is a military rank used in many countries. The rank traces its origins to the Middle Ages where the title of Lieutenant General was held by the second in command on the battlefield, who was normally subordinate to a Captain General....
and main strategic planner during the Winter War
Winter War
The Winter War was a military conflict between the Soviet Union and Finland. It began with a Soviet offensive on 30 November 1939 – three months after the start of World War II and the Soviet invasion of Poland – and ended on 13 March 1940 with the Moscow Peace Treaty...
and the Continuation War
Continuation War
The Continuation War was the second of two wars fought between Finland and the Soviet Union during World War II.At the time of the war, the Finnish side used the name to make clear its perceived relationship to the preceding Winter War...
. He was the virtual second-in-command of the Finnish army under Field Marshal
Field Marshal (Finland)
In Finnish Defence Forces Field Marshal is officially not an active military rank but an honorary rank that can be bestowed upon 'especially distinguished generals'...
C.G.E. Mannerheim
Carl Gustaf Emil Mannerheim
Baron Carl Gustaf Emil Mannerheim was the military leader of the Whites in the Finnish Civil War, Commander-in-Chief of Finland's Defence Forces during World War II, Marshal of Finland, and a Finnish statesman. He was Regent of Finland and the sixth President of Finland...
.

As a young man he became a supporter of Finnish independence. His father changed the original, Swedish
Sweden
Sweden , officially the Kingdom of Sweden , is a Nordic country on the Scandinavian Peninsula in Northern Europe. Sweden borders with Norway and Finland and is connected to Denmark by a bridge-tunnel across the Öresund....
, family name
Family name
A family name is a type of surname and part of a person's name indicating the family to which the person belongs. The use of family names is widespread in cultures around the world...
Johansson to Airo (lit. "oar").

During the Civil War in Finland (1918), Airo served in the artillery
Artillery
Originally applied to any group of infantry primarily armed with projectile weapons, artillery has over time become limited in meaning to refer only to those engines of war that operate by projection of munitions far beyond the range of effect of personal weapons...
on the White side
White Guard (Finland)
The White Guard was a voluntary militia that emerged victorious over the socialist Red Guard as part of the Whites in the Finnish Civil War of 1918...
, taking part in battles near Viipuri. At the end of the war he was a lieutenant
Lieutenant
A lieutenant is a junior commissioned officer in many nations' armed forces. Typically, the rank of lieutenant in naval usage, while still a junior officer rank, is senior to the army rank...
. Afterwards he was trained as an officer in Lappeenranta
Lappeenranta
Lappeenranta is a city and municipality that resides on the shore of the lake Saimaa in South-Eastern Finland, about from the Russian border. It belongs to the region of South Karelia. With approximately inhabitants Lappeenranta is the largest city in Finland...
artillery school and was sponsored to the French
France
The French Republic , The French Republic , The French Republic , (commonly known as France , is a unitary semi-presidential republic in Western Europe with several overseas territories and islands located on other continents and in the Indian, Pacific, and Atlantic oceans. Metropolitan France...
military academy, École militaire
École Spéciale Militaire de Saint-Cyr
The École Spéciale Militaire de Saint-Cyr is the foremost French military academy. Its official name is . It is often referred to as Saint-Cyr . Its motto is "Ils s'instruisent pour vaincre": literally "They study to vanquish" or "Training for victory"...
in St.-Cyr
Saint-Cyr-l'École
Saint-Cyr-l'École is a commune in the western suburbs of Paris, France. It is located from the center of Paris.It used to host the training school for officers of the French army, the École Spéciale Militaire de Saint-Cyr , which was relocated to Coëtquidan in 1945.The old buildings of the ESM are...
in 1920. In 1921 he was accepted into École Supérieure de Guerre, the French officer training academy, from which he graduated as a captain in 1923, at the age of 27. Mannerheim invited him to join Finland's Defense Council as a secretary.

Airo rose swiftly in rank, mainly because newly-independent Finland needed suitable officers for the fledgling army. He had, however, some professional challenges because he was neither a Germany-trained Jaeger officer, nor one of the officers trained in the Tsar
Tsar
Tsar is a title used to designate certain European Slavic monarchs or supreme rulers. As a system of government in the Tsardom of Russia and Russian Empire, it is known as Tsarist autocracy, or Tsarism...
's army during Russia
Russia
Russia or , officially known as both Russia and the Russian Federation , is a country in northern Eurasia. It is a federal semi-presidential republic, comprising 83 federal subjects...
n rule. Still, by 1930 he had become a colonel
Colonel
Colonel , abbreviated Col or COL, is a military rank of a senior commissioned officer. It or a corresponding rank exists in most armies and in many air forces; the naval equivalent rank is generally "Captain". It is also used in some police forces and other paramilitary rank structures...
.

In the beginning of the Winter War
Winter War
The Winter War was a military conflict between the Soviet Union and Finland. It began with a Soviet offensive on 30 November 1939 – three months after the start of World War II and the Soviet invasion of Poland – and ended on 13 March 1940 with the Moscow Peace Treaty...
, Mannerheim appointed Airo as Quartermaster-General
Quartermaster general
A Quartermaster general is the staff officer in charge of supplies for a whole army.- The United Kingdom :In the United Kingdom, the Quartermaster-General to the Forces is one of the most senior generals in the British Army...
, and he was promoted to major general
Major General
Major general or major-general is a military rank used in many countries. It is derived from the older rank of sergeant major general. A major general is a high-ranking officer, normally subordinate to the rank of lieutenant general and senior to the ranks of brigadier and brigadier general...
, and two years later to lieutenant general
Lieutenant General
Lieutenant General is a military rank used in many countries. The rank traces its origins to the Middle Ages where the title of Lieutenant General was held by the second in command on the battlefield, who was normally subordinate to a Captain General....
. On November 18, 1944, Marshal Mannerheim made him a Knight of the Mannerheim Cross
Mannerheim Cross
The Mannerheim Cross of Liberty is the highest Finnish military decoration. The medal was introduced after the Winter War and named after Field Marshal Carl Gustaf Emil Mannerheim...
in Order of the Cross of Liberty
Order of the Cross of Liberty
There are three official orders in Finland: the Order of the Cross of Liberty , the Order of the White Rose of Finland and the Order of the Lion of Finland. The President of Finland is the Grand Master of the two orders, and usually of the Order of the Cross of Liberty as well, Grand Mastership of...
.

Airo was in the Mikkeli
Mikkeli
Mikkeli is a town and municipality in Finland. It is located in what used to be the province of Eastern Finland and is part of the Southern Savonia region. The municipality has a population of and covers an area of of which is water...
headquarters during the war and rarely went to the field. He was responsible for operational planning and the presentation of operations, or, as he allegedly said, "The Marshal leads the war, but I lead the battles". They had many differences in opinion but still managed to work well together.

After the Continuation War
Continuation War
The Continuation War was the second of two wars fought between Finland and the Soviet Union during World War II.At the time of the war, the Finnish side used the name to make clear its perceived relationship to the preceding Winter War...
, the now Communist-dominated Valpo (the Finnish State Police)
Valtiollinen Poliisi
Valtiollinen poliisi was the predecessor of the Finnish Security Intelligence Service.- Etsivä keskuspoliisi :...
arrested him for his alleged involvement in the so-called Weapons Cache Case
Weapons Cache Case
The Weapons Cache Case was a Finnish criminal case of the mid-1940s. It concerned a secret military operation following the Continuation War, where a large number of Finnish Army weapons and equipment was hidden away around the country....
. He was imprisoned from 1945 to 1948 without being sentenced, until president
President of Finland
The President of the Republic of Finland is the nation's head of state. Under the Finnish constitution, executive power is vested in the President and the government, with the President possessing extensive powers. The President is elected directly by the people of Finland for a term of six years....
Juho Kusti Paasikivi
Juho Kusti Paasikivi
Juho Kusti Paasikivi was the seventh President of Finland . Representing the Finnish Party and the National Coalition Party, he also served as Prime Minister of Finland , and was generally an influential figure in Finnish economics and politics for over fifty years...
released him. He said little about the affair afterwards and earned the moniker "the silent general". The President relieved him of his duties with special permission to wear a military uniform.