Encyclopedia
Ferentino is a town and comune
Comune
In Italy, the comune is the basic administrative division, and may be properly approximated in casual speech by the English word township or municipality.-Importance and function:...
in Italy
Italy
Italy , officially the Italian Republic languages]] under the European Charter for Regional or Minority Languages. In each of these, Italy's official name is as follows:;;;;;;;;), is a unitary parliamentary republic in South-Central Europe. To the north it borders France, Switzerland, Austria and...
, in the province of Frosinone
Province of Frosinone
The Province of Frosinone is a province in the Lazio region of Italy, with 91 comuni . Its capital is the city of Frosinone. It has an area of 3,244 km², and a total population of 489,042 .The Province was established by Royal Decree on 6 December 1926 with territories belonging to Lazio...
, Lazio, 65 km southeast of Rome
Rome
Rome is the capital of Italy and the country's largest and most populated city and comune, with over 2.7 million residents in . The city is located in the central-western portion of the Italian Peninsula, on the Tiber River within the Lazio region of Italy.Rome's history spans two and a half...
.
It is situated on a hill 400 m above sea-level, in the Monti Ernici
Monti Ernici
The Monti Ernici are a mountain range in central Italy, part of the sub-Apennines of Lazio. They are bounded by the valley of the river Aniene to the north-east, that of the Liri to the east, and, from south to west, by the valleys of the Cosa and Sacco...
area.

Ferentinum was a town of the Hernici
Hernici
The Hernici were an ancient people of Italy, whose territory was in Latium between the Lago di Fucino and the Sacco River , bounded by the Volsci on the south, and by the Aequi and the Marsi on the north....
; it was captured from them by the Romans
Roman Republic
The Roman Republic was the period of the ancient Roman civilization where the government operated as a republic. It began with the overthrow of the Roman monarchy, traditionally dated around 508 BC, and its replacement by a government headed by two consuls, elected annually by the citizens and...
in 364 BC and took no part in the rising of 306 BC. The inhabitants became Roman citizens after 195 BC, and the place later became a municipium. It lay just above the Via Latina
Via Latina
The Via Latina was a Roman road of Italy, running southeast from Rome for about 200 kilometers.It led from the Porta Latina in the Aurelian walls of Rome to the pass of Mons Algidus; it was important in the early military history of Rome...
and, being a strong place, served for the detention of hostages.

From 1198 to 1557 it was the seat of the Papal rectorate of Campagna and Marittima province.

Strong in textiles (linen and embroidery) and handicraft (clay bricks from Fornaci Giorgi), after World War II
World War II
World War II, or the Second World War , was a global conflict lasting from 1939 to 1945, involving most of the world's nations—including all of the great powers—eventually forming two opposing military alliances: the Allies and the Axis...
Ferentino experienced a heavy industrial growth, mainly in pharmaceuticals.

Ferentino still possesses considerable remains of ancient fortifications. The lower portion of the outer walls, which probably did not stand free, is built of roughly hewn blocks of a limestone which naturally splits into horizontal layers; above this in places is walling of rectangular blocks of tuff
Tuff
Tuff is a type of rock consisting of consolidated volcanic ash ejected from vents during a volcanic eruption. Tuff is sometimes called tufa, particularly when used as construction material, although tufa also refers to a quite different rock. Rock that contains greater than 50% tuff is considered...
. Two gates, the Porta Maggiore, a double gate constructed entirely of rectangular blocks of tuff, and the Porta Sanguinaria (with an arch with tuff voussoirs), are preserved. Outside this gate is the testament of Aulus Quinctilius Priscus inscribed in the rock.

The highest part of the town, the acropolis
Acropolis
Acropolis means "high city" in Greek, literally city on the extremity and is usually translated into English as Citadel . For purposes of defense, early people naturally chose elevated ground to build a new settlement, frequently a hill with precipitous sides...
(2nd-1st centuries BC), is fortified also; it has massive retaining walls similar to those of the lower town. At the eastern corner, under the present episcopal palace, the construction is somewhat more careful. A projecting rectangular terrace has been erected, supported by walls of quadrilateral blocks of limestone arranged almost horizontally; while upon the level thus formed a building of rectangular blocks of local travertine was raised. The projecting cornice of this building bears two inscriptions of the period of Sulla, recording its construction by two censors (local officials); and in the interior, which contains several chambers, there is an inscription of the same censors over one of the doors, and another over a smaller external aide door. The windows lighting these chambers come immediately above the cornice, and the wall continues above them again. The whole of this construction probably belongs to one period. 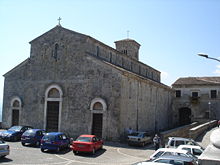 The Cathedral of Sts. John and Paul occupies a part of the level top of the ancient acropolis; it was reconstructed on the site of an older church in 1099-1118; the interior was modernized in 1693, but was restored to its original form in 1902. It contains a fine ciborium
Ciborium (architecture)
In ecclesiastical architecture, a ciborium is a canopy or covering supported by columns, freestanding in the sanctuary, that stands over and covers the altar in a basilica or other church. It may also be known by the more general term of baldachin, though ciborium is often considered more correct...
in the Cosmatesque
Cosmatesque
Cosmatesque, or Cosmati, is a style of geometric decorative inlay stonework typical of Medieval Italy, and especially of Rome and its surroundings. It was used most extensively for the decoration of church floors, but was also used to decorate church walls, pulpits, and bishop's thrones...
style and a 12th century mosaic pavement.

The Gothic church of Santa Maria Maggiore, in the lower town (13th-14th century), has a very fine exterior; the interior, the plan of which is a perfect rectangle, has been spoilt by restoration. Other religious edifices include the Benedictine church of San Valentino (mostly remade after World War II, but still including 13th century frescoes) and the Romanesque monastery of Sant'Antonio Abate, which housed the remains of Pope Celestine V
Pope Celestine V
Pope Saint Celestine V, born Pietro Angelerio , also known as Pietro da Morrone was elected pope in the year 1294, by the papal election of 1292–1294, the last non-conclave in the history of the Roman Catholic Church...
until 1327. The latter's heart is preserved in the small convent church of the Clarisse (17th century).

Ekaterinburg, Russia
Russia
Russia or , officially known as both Russia and the Russian Federation , is a country in northern Eurasia. It is a federal semi-presidential republic, comprising 83 federal subjects...
San Severino Marche
San Severino Marche
San Severino Marche is a comune in the Province of Macerata in the Italian region Marche, located about 50 km southwest of Ancona and about 25 km southwest of Macerata.-From prehistory to Roman age:...
, Italy
Italy
Italy , officially the Italian Republic languages]] under the European Charter for Regional or Minority Languages. In each of these, Italy's official name is as follows:;;;;;;;;), is a unitary parliamentary republic in South-Central Europe. To the north it borders France, Switzerland, Austria and...
Rockford
Rockford, Illinois
Rockford is a mid-sized city located on both banks of the Rock River in far northern Illinois. Often referred to as "The Forest City", Rockford is the county seat of Winnebago County, Illinois, USA. As reported in the 2010 U.S. census, the city was home to 152,871 people, the third most populated...
, United States
United States
The United States of America is a federal constitutional republic comprising fifty states and a federal district...