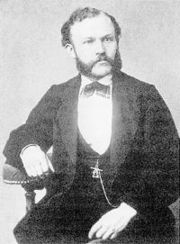 Ferdinand Adolf Kehrer was a German gynecologist who was a native of Guntersblum
Guntersblum
Guntersblum is an Ortsgemeinde– a municipality belonging to a Verbandsgemeinde, a kind of collective municipality – in the Frankfurt/Rhine-Main Metropolitan Region in the Mainz-Bingen district in Rhineland-Palatinate, Germany.- Location :...
in Rhenish Hesse. He was the father of neurologist
Neurologist
A neurologist is a physician who specializes in neurology, and is trained to investigate, or diagnose and treat neurological disorders.Neurology is the medical specialty related to the human nervous system. The nervous system encompasses the brain, spinal cord, and peripheral nerves. A specialist...
Ferdinand Adalbert Kehrer (1883-1966).

Kehrer is remembered for performing the first modern Caesarean section
Caesarean section
A Caesarean section, is a surgical procedure in which one or more incisions are made through a mother's abdomen and uterus to deliver one or more babies, or, rarely, to remove a dead fetus...
. This involved a transverse incision of the lower segment of the uterus
Uterus
The uterus or womb is a major female hormone-responsive reproductive sex organ of most mammals including humans. One end, the cervix, opens into the vagina, while the other is connected to one or both fallopian tubes, depending on the species...
, a method that minimizes bleeding, and is still widely used today.

On September 25, 1881, Kehrer performed the first modern C-section in Meckesheim
Meckesheim
Meckesheim is a village in south western Germany. It is located between Heidelberg and Sinsheim in the Rhein-Neckar district in the state of Baden-Württemberg.-History:...
on a 26-year old woman. The operation was a success. Prior to Kehrer's operation, Caesarean sections were seldom performed, and when they were, the mortality rate
Mortality rate
Mortality rate is a measure of the number of deaths in a population, scaled to the size of that population, per unit time...
of mothers was very high. The following year, Max Sanger (1853-1903), introduced the practice of suturing the uterus' Caesarean wound.

He died in Heidelberg
Heidelberg
-Early history:Between 600,000 and 200,000 years ago, "Heidelberg Man" died at nearby Mauer. His jaw bone was discovered in 1907; with scientific dating, his remains were determined to be the earliest evidence of human life in Europe. In the 5th century BC, a Celtic fortress of refuge and place of...
.