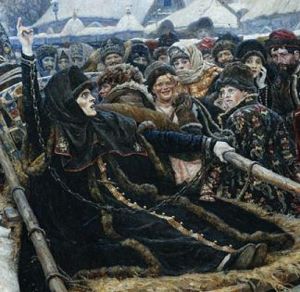 Feodosia Prokopiyevna Morozova (1632-1675) was one of the best-known partisans of the Old Believer movement.

She was born on May 21, 1632 into a family of the okolnichi Prokopy Feodorovich Sokovnin. At the age of 17, she was married to the boyar Gleb Morozov, brother to the tsar's tutor Boris Morozov
Boris Morozov
Boris Ivanovich Morozov was a Muscovite statesman and boyar who led the Russian government during the early reign of Tsar Alexis, whose tutor and brother-in-law he was....
. After her husband's early death in 1662, she retained a prominent position at the Russian court. 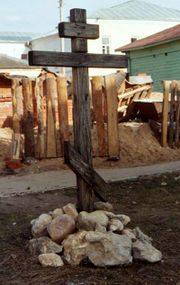 After many misfortunes the sisters
Nun
A nun is a woman who has taken vows committing her to live a spiritual life. She may be an ascetic who voluntarily chooses to leave mainstream society and live her life in prayer and contemplation in a monastery or convent...
were incarcerated in an underground cellar of the St. Paphnutius Monasteryhttp://img-2004-04.photosight.ru/21/467479.jpg at Borovsk
Borovsk
Borovsk is a town and the administrative center of Borovsky District of Kaluga Oblast, Russia, located just south from the oblast's border with Moscow Oblast. It is situated on the Protva River, about southwest of Moscow.Population: 12,000 ....
, where Feodosia succumbed to starvation on December 1, 1675. Many Old Believer communities venerate her as a martyr
Martyr
A martyr is somebody who suffers persecution and death for refusing to renounce, or accept, a belief or cause, usually religious.-Meaning:...
.