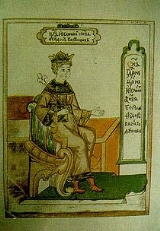 Encyclopedia
Fyodor II Borisovich Godunov of Russia (1589 – 10 June/20 June 1605) was a tsar
Tsar
Tsar is a title used to designate certain European Slavic monarchs or supreme rulers. As a system of government in the Tsardom of Russia and Russian Empire, it is known as Tsarist autocracy, or Tsarism...
of Russia
Russia
Russia or , officially known as both Russia and the Russian Federation , is a country in northern Eurasia. It is a federal semi-presidential republic, comprising 83 federal subjects...
(1605) during the Time of Troubles
Time of Troubles
The Time of Troubles was a period of Russian history comprising the years of interregnum between the death of the last Russian Tsar of the Rurik Dynasty, Feodor Ivanovich, in 1598, and the establishment of the Romanov Dynasty in 1613. In 1601-1603, Russia suffered a famine that killed one-third...
. He was born in Moscow
Moscow
Moscow is the capital, the most populous city, and the most populous federal subject of Russia. The city is a major political, economic, cultural, scientific, religious, financial, educational, and transportation centre of Russia and the continent...
, the son and successor to Boris Godunov
Boris Godunov
Boris Fyodorovich Godunov was de facto regent of Russia from c. 1585 to 1598 and then the first non-Rurikid tsar from 1598 to 1605. The end of his reign saw Russia descend into the Time of Troubles.-Early years:...
. His mother Maria Grigorievna Skuratova-Belskaya
Maria Grigorievna Skuratova-Belskaya
Maria Grigorievna Skuratova-Belskaya , was a Tsaritsa of Russia as the spouse of Tsar Boris Godunov.In 1570/1571, Godunov strengthened his position at court by his marriage to her as she was the daughter of Tsar Ivan the Terrible's favorite Malyuta Skuratov-Belskiy.She was the mother of Tsar Feodor...
was one of the daughters of Malyuta Skuratov
Malyuta Skuratov
Grigory Lukyanovich Skuratov-Belskiy , better known as Malyuta Skuratov was one of the most odious leaders of the Oprichnina during the reign of Ivan the Terrible....
, the infamous favourite of Ivan the Terrible.

Physically robust and passionately beloved by his father, he received the best education available at that time, and from childhood was initiated into all the minutiae of government, besides sitting regularly in the council
Duma
A Duma is any of various representative assemblies in modern Russia and Russian history. The State Duma in the Russian Empire and Russian Federation corresponds to the lower house of the parliament. Simply it is a form of Russian governmental institution, that was formed during the reign of the...
and receiving the foreign envoy
Diplomat
A diplomat is a person appointed by a state to conduct diplomacy with another state or international organization. The main functions of diplomats revolve around the representation and protection of the interests and nationals of the sending state, as well as the promotion of information and...
s. He seems also to have been remarkably and precociously intelligent, creating a map of Russia, which is still preserved. It was edited with some additions by Hessel Gerritsz
Hessel Gerritsz
Hessel Gerritsz was a Dutch engraver, cartographer and publisher. Despite strong competition, he is considered by some “unquestionably the chief Dutch cartographer of the 17th century”...
in Amsterdam
Amsterdam
Amsterdam is the largest city and the capital of the Netherlands. The current position of Amsterdam as capital city of the Kingdom of the Netherlands is governed by the constitution of August 24, 1815 and its successors. Amsterdam has a population of 783,364 within city limits, an urban population...
, in 1613, and reedited until 1665.

On the sudden death of Boris the sixteen-year-old was proclaimed tsar (13 April 1605). Though his father had taken the precaution to surround him with powerful friends, he lived from the first moment of his reign in an atmosphere of treachery. On 11 June (N. S.) 1605 the envoys of Pseudo-Demetrius I
False Dmitriy I
False Dmitriy I was the Tsar of Russia from 21 July 1605 until his death on 17 May 1606 under the name of Dimitriy Ioannovich . He is sometimes referred to under the usurped title of Dmitriy II...
(or False Dmitriy I) arrived at Moscow to demand his removal, and the letters which they read publicly in Red Square
Red Square
Red Square is a city square in Moscow, Russia. The square separates the Kremlin, the former royal citadel and currently the official residence of the President of Russia, from a historic merchant quarter known as Kitai-gorod...
decided his fate. A group of boyar
Boyar
A boyar, or bolyar , was a member of the highest rank of the feudal Moscovian, Kievan Rus'ian, Bulgarian, Wallachian, and Moldavian aristocracies, second only to the ruling princes , from the 10th century through the 17th century....
s, unwilling to swear allegiance to the new tsar, seized control of the Kremlin
Moscow Kremlin
The Moscow Kremlin , sometimes referred to as simply The Kremlin, is a historic fortified complex at the heart of Moscow, overlooking the Moskva River , Saint Basil's Cathedral and Red Square and the Alexander Garden...
and arrested him.

On 10/20 June Feodor was strangled in his apartment, together with his mother. Officially, he was declared to have been poisoned, but the Swedish diplomat Peter Petreius
Peter Petreius
Peer Peersson of Erlesunda, also known as Per Erlesund and by his Latinized pen name Peter Petreius was a Swedish diplomat, envoy to Muscovy and author of the History of the Grand Duchy of Muscovy that attempted to present a complete history of Russia from the foundation of Kievan Rus to the end...
stated that the bodies, which had been on public display, showed traces of a violent struggle. Although aged 16 at best, Feodor was known to be physically strong and agile and apparently it took four men to overpower him.
The source of this article is wikipedia, the free encyclopedia.  The text of this article is licensed under the GFDL.