Encyclopedia
The Federal Criminal Police Office of Germany (in German
German language
German is a West Germanic language, related to and classified alongside English and Dutch. With an estimated 90 – 98 million native speakers, German is one of the world's major languages and is the most widely-spoken first language in the European Union....
: or ) is a national
Federal republic
A federal republic is a federation of states with a republican form of government. A federation is the central government. The states in a federation also maintain the federation...
investigative police
Police
The police is a personification of the state designated to put in practice the enforced law, protect property and reduce civil disorder in civilian matters. Their powers include the legitimized use of force...
agency in Germany
Germany
Germany , officially the Federal Republic of Germany , is a federal parliamentary republic in Europe. The country consists of 16 states while the capital and largest city is Berlin. Germany covers an area of 357,021 km2 and has a largely temperate seasonal climate...
and falls directly under the Federal Ministry of the Interior
Federal Ministry of the Interior (Germany)
The Federal Ministry of the Interior is a ministry of the German federal government. Its main office is in Berlin, with a secondary seat in Bonn. The current minister of the interior is Dr...
. As law enforcement in Germany is vested in the states, the BKA only becomes involved in cases of international organised crime or when requested by the respective federal state authorities or the federal minister of the interior. The federal prosecutor can also direct it to investigate cases of special public interest.

The BKA should not be confused with the Austrian Federal Investigation Bureau which is also called Bundeskriminalamt but is abbreviated BK. 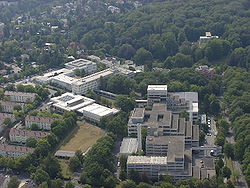 It is headquartered in Wiesbaden
Wiesbaden
Wiesbaden is a city in southwest Germany and the capital of the federal state of Hesse. It has about 275,400 inhabitants, plus approximately 10,000 United States citizens...
and occupies three different locations in the city, one of which is the former Lindsey Air Station.

Outside of Wiesbaden, the BKA has branch offices in Berlin
Berlin
Berlin is the capital city of Germany and is one of the 16 states of Germany. With a population of 3.45 million people, Berlin is Germany's largest city. It is the second most populous city proper and the seventh most populous urban area in the European Union...
, Bonn
Bonn
Bonn is the 19th largest city in Germany. Located in the Cologne/Bonn Region, about 25 kilometres south of Cologne on the river Rhine in the State of North Rhine-Westphalia, it was the capital of West Germany from 1949 to 1990 and the official seat of government of united Germany from 1990 to 1999....
and Meckenheim. The BKA is subordinate to the Federal Ministry of the Interior
Federal Ministry of the Interior (Germany)
The Federal Ministry of the Interior is a ministry of the German federal government. Its main office is in Berlin, with a secondary seat in Bonn. The current minister of the interior is Dr...
.

The BKA provides assistance to the states in forensic matters, research and organized crime investigations. It is Germany's national central bureau for the European Police Office (Europol), Schengen Information System
Schengen Information System
The Schengen Information System , is a governmental database used by European countries to maintain and distribute information on individuals and pieces of property of interest. The intended uses of this system are for national security, border control and law enforcement purposes...
, the German criminal AFIS
Automated Fingerprint Identification System
Automated fingerprint identification is the process of automatically matching one or many unknown fingerprints against a database of known and unknown prints...
and International Criminal Police Organization (Interpol).

The Close Protection Group protects the members of Germany's constitutional bodies and their foreign guests of state and is often the most visible part of the BKA. Specially selected and trained officers with special equipment and vehicles provide round-the-clock personal security to those they protect. The Protection Group is now headquartered in Berlin.