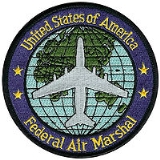 Because of the nature of their occupation, Federal Air Marshals (FAMs) travel often.

WHAT ARE THE QUALIFCATION TO BECOME A AIR MARSHAL? IS COLEGE REQUIRED
More
x