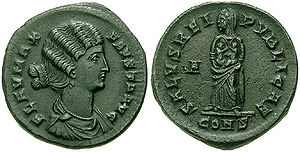 Fausta Flavia Maxima was a Roman Empress, daughter of the Roman Emperor
Roman Emperor
The Roman emperor was the ruler of the Roman State during the imperial period . The Romans had no single term for the office although at any given time, a given title was associated with the emperor...
Maximianus. To seal the alliance between them for control of the Tetrarchy
Tetrarchy
The term Tetrarchy describes any system of government where power is divided among four individuals, but usually refers to the tetrarchy instituted by Roman Emperor Diocletian in 293, marking the end of the Crisis of the Third Century and the recovery of the Roman Empire...
, in 307 Maximianus married her to Constantine I
Constantine I
Constantine the Great , also known as Constantine I or Saint Constantine, was Roman Emperor from 306 to 337. Well known for being the first Roman emperor to convert to Christianity, Constantine and co-Emperor Licinius issued the Edict of Milan in 313, which proclaimed religious tolerance of all...
, who set aside his wife Minervina
Minervina
Minervina was the wife rather than the mistress of Constantine the Great. He married her in 303 AD, and the couple had one son, Crispus. When Constantine wanted to strengthen his bonds with the other Tetrarchs, in 307 AD. he set apart Minervina and married Fausta, daughter of Augustus...
in her favour. Constantine and Fausta had been betrothed since 293.

Fausta had a part in her father's downfall. In 310 Maximian died as a consequence of an assassination plot against Constantine. Maximian decided to involve his daughter Fausta, but she revealed the plot to her husband, and the assassination was disrupted. Maximian died, by suicide or by assassination, in July of that same year.

Empress Fausta was held in high esteem by Constantine, and proof of his favour was that in 323 she was proclaimed Augusta
Augusta (honorific)
Augusta was the imperial honorific title of empresses. It was given to the women of the Roman and Byzantine imperial families. In the third century, Augustae could also receive the titles of Mater castrorum and Mater Patriae .The title implied the greatest prestige, with the Augustae able to...
; previously she held the title of Nobilissima Femina. However three years later Fausta was put to death by Constantine, following the execution of Crispus
Crispus
Flavius Julius Crispus , also known as Flavius Claudius Crispus and Flavius Valerius Crispus, was a Caesar of the Roman Empire. He was the first-born son of Constantine I and Minervina.-Birth:...
, his eldest son by Minervina, in 326. The two deaths have been inter-related in various ways; in one, Fausta is set jealously against Crispus, as in the anonymous Epitome de Caesaribus, or conversely her adultery, perhaps with the stepson who was close to her in age, is suggested. Fausta was executed by suffocation in an over-heated bath, a mode of assassination not otherwise attested in the Roman world. David Woods offers the connection of overheated bathing with contemporaneous techniques of abortion, a suggestion that implies an unwanted, adulterous pregnancy according to Constantine's biographer Paul Stephenson.

The Emperor ordered the damnatio memoriae
Damnatio memoriae
Damnatio memoriae is the Latin phrase literally meaning "condemnation of memory" in the sense of a judgment that a person must not be remembered. It was a form of dishonor that could be passed by the Roman Senate upon traitors or others who brought discredit to the Roman State...
of his wife with the result that no contemporary source records details of her fate: "Eusebius
Eusebius of Caesarea
Eusebius of Caesarea also called Eusebius Pamphili, was a Roman historian, exegete and Christian polemicist. He became the Bishop of Caesarea in Palestine about the year 314. Together with Pamphilus, he was a scholar of the Biblical canon...
, ever the sycophant, mentions neither Crispus nor Fausta in his Life of Constantine, and even wrote Crispus out of the final version of his Ecclesiastical History (HE X.9.4)", Constantine's biographer Paul Stephenson observes.

Significantly, her sons, once in power, never revoked this order. Her sons became Roman Emperors: Constantine II
Constantine II (emperor)
Constantine II , was Roman Emperor from 337 to 340. Co-emperor alongside his brothers, his short reign saw the beginnings of conflict emerge between the sons of Constantine the Great, and his attempt to exert his perceived rights of primogeniture ended up causing his death in a failed invasion of...
, probably an illegitimate son of Constantine, and thus her stepson, reigned 337 – 340, Constantius II
Constantius II
Constantius II , was Roman Emperor from 337 to 361. The second son of Constantine I and Fausta, he ascended to the throne with his brothers Constantine II and Constans upon their father's death....
reigned 337 – 361, and Constans
Constans
Constans , was Roman Emperor from 337 to 350. He defeated his brother Constantine II in 340, but anger in the army over his personal life and preference for his barbarian bodyguards saw the general Magnentius rebel, resulting in Constans’ assassination in 350.-Career:Constans was the third and...
reigned 337 – 350. She also bore three daughters Constantina
Constantina
Constantina , and later known as Saint Constance, was the eldest daughter of Roman Emperor Constantine the Great and his second wife Fausta, daughter of Emperor Maximian...
, Helena
Helena, wife of Julian
Helena was the wife of Julian, Roman Emperor in 360–363. She was briefly his Empress consort when Julian was proclaimed Augustus by his troops in 360. She died prior to the resolution of his conflict with Constantius II.-Family:...
and Fausta. Of these, Constantina married her cousins, firstly Hannibalianus
Hannibalianus
Flavius Hannibalianus was a member of the Constantinian dynasty, which ruled over the Roman Empire in the 4th century.Hannibalianus was the son of Flavius Dalmatius, and thus nephew of Constantine I...
and secondly Constantius Gallus
Constantius Gallus
Flavius Claudius Constantius Gallus , commonly known as Constantius Gallus, was a member of the Constantinian dynasty and Caesar of the Roman Empire . Gallus was consul three years, from 352 to 354.- Family :...
, and Helena married Emperor Julian
Julian
Julian is a common male given name in Britain, United States, Ireland, Germany, Poland, the Netherlands, France , Spain, Latin America and elsewhere....
. Apparently a genealogical claim that her daughter Fausta became mother of Emperor Valentinian I
Valentinian I
Valentinian I , also known as Valentinian the Great, was Roman emperor from 364 to 375. Upon becoming emperor he made his brother Valens his co-emperor, giving him rule of the eastern provinces while Valentinian retained the west....
is without foundation (Valentinian I and children of Constantine I's second marriage were born in years close to each other, i.e., they were of the same generation).