The Fast Carrier Task Force was known under two designations. The Navy made use of two sets of upper command structures for planning the upcoming operations. Depending on the commanding officers, the force was known as either Task Force 38 or Task Force 58. Spruance and Halsey would alternate command of the fleet for major operations, allowing the other admiral and his staff time to prepare for the subsequent one. This not only aided in the planning of operations, but it also was intended to confuse the Japanese and give the general impression of a Navy twice as large as what was actually available. The Fleet designation also switched as well, with the Third Fleet being the designation used when under the command of Admiral William Halsey, and the Fifth Fleet being used when under the command of Admiral Raymond Spruance.

TF 38 came into existence in August 1943, built around USS Saratoga
USS Saratoga (CV-3)
USS Saratoga was the second aircraft carrier of the United States Navy and the fifth ship to bear her name. She was commissioned one month earlier than her sister and class leader, , which is the third actually commissioned after and Saratoga...
, and under the command of Rear Admiral
Rear Admiral
Rear admiral is a naval commissioned officer rank above that of a commodore and captain, and below that of a vice admiral. It is generally regarded as the lowest of the "admiral" ranks, which are also sometimes referred to as "flag officers" or "flag ranks"...
Frederick Sherman.

TF 58 was created on 6 January 1944 with Rear Admiral Marc Mitscher
Marc Mitscher
Admiral Marc Andrew "Pete" Mitscher was an admiral in the United States Navy who served as commander of the Fast Carrier Task Force in the Pacific in the latter half of World War II.-Early life and career:...
commanding, serving under the fleet command of Admiral Spruance in the Fifth Fleet. TF 38 continued to exist, but as a command structure only.

On 26 August 1944, Fifth Fleet changed designation to the Third Fleet, and TF 58 likewise became TF 38. Mitscher retained command of the Task Force, under the fleet command of Admiral William 'Bull' Halsey, Jr. The force grew to nine CVs and eight CVLs in preparation for the landings
Battle of Leyte
The Battle of Leyte in the Pacific campaign of World War II was the invasion and conquest of the island of Leyte in the Philippines by American and Filipino guerrilla forces under the command of General Douglas MacArthur, who fought against the Imperial Japanese Army in the Philippines led by...
on Leyte. Among the task groups of TF 38 on this occasion was Task Group 38.4, under the command of Rear Admiral Davison. Rear Admiral Davison's administrative assignment was as Commander Carrier Division Two. 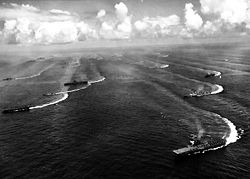 Following the Battle of Leyte Gulf
Battle of Leyte Gulf
The Battle of Leyte Gulf, also called the "Battles for Leyte Gulf", and formerly known as the "Second Battle of the Philippine Sea", is generally considered to be the largest naval battle of World War II and, by some criteria, possibly the largest naval battle in history.It was fought in waters...
, Mitscher went on shore leave and planning duty, and Vice Admiral John S. McCain, Sr.
John S. McCain, Sr.
John Sidney "Slew" McCain Sr. was a U.S. Navy admiral. He held several command assignments during the Pacific campaign of World War II....
took over as commanding officer of TF 38, which continued under Halsey and the Third Fleet.

On 26 January 1945, Halsey and McCain went on shore leave and planning duty, and Spruance and Mitscher returned to their previous commands. Third Fleet became Fifth Fleet, and TF 38 became TF 58.

On 28 May 1945, fleet designations and command personnel changed again, as Halsey and McCain returned to sea duty, and Spruance and Mitscher went ashore. Fifth Fleet became Third Fleet, and TF 58 became TF 38. This command arrangement lasted until the Japanese surrender ended the war on 2 September 1945.