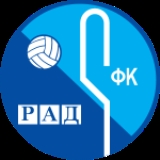 Encyclopedia
FK Rad is a football club from Belgrade
Belgrade
Belgrade is the capital and largest city of Serbia. It is located at the confluence of the Sava and Danube rivers, where the Pannonian Plain meets the Balkans. According to official results of Census 2011, the city has a population of 1,639,121. It is one of the 15 largest cities in Europe...
, Serbia
Serbia
Serbia , officially the Republic of Serbia , is a landlocked country located at the crossroads of Central and Southeast Europe, covering the southern part of the Carpathian basin and the central part of the Balkans...
. It plays at Stadion Kralj Petar I
Stadion Kralj Petar I
Stadion Kralj Petar I is the home ground of FK Rad. It's also known simply as Stadion FK Rad. The all-seated stadium was named after Kralj Petar I, a famous Serbian king from the early 1900s. The stadium has a seating capacity for around 6,000 people....
, which is located in the southern part of the city's Banjica
Banjica
Banjica is an urban neighborhood of Belgrade, the capital of Serbia. It is divided between the Belgrade's municipalities of Savski Venac and Voždovac .- Location :...
neighbourhood.

Translated into English
English language
English is a West Germanic language that arose in the Anglo-Saxon kingdoms of England and spread into what was to become south-east Scotland under the influence of the Anglian medieval kingdom of Northumbria...
, the club's name signifies "work" or "labour" due to being formed by the construction
Construction
In the fields of architecture and civil engineering, construction is a process that consists of the building or assembling of infrastructure. Far from being a single activity, large scale construction is a feat of human multitasking...
company of the same name.

Over the years, the club served as breeding ground for a number of well-known players, including Vladimir Jugović
Vladimir Jugovic
Vladimir Jugović is a retired Serbian football player renowned for his vision and technique.-Career:Born in Milutovac, a village near Trstenik, Serbia, SFR Yugoslavia, Jugović played throughout his career for numerous top European teams, winning the Champions League twice...
, Ljubinko Drulović
Ljubinko Drulovic
Ljubinko Drulović is a retired Serbian footballer, and a current coach....
, Zoran Mirković
Zoran Mirkovic
Zoran "Bata" Mirković is a former Serbian footballer.-Club career:Mirković made his first appearance for FK Rad during the 1990–91 season. But even before that he and his teammates won the Yugoslav title in the under-21 category, the biggest success this club ever had...
, Miroslav Đukić, Goran Bunjevčević
Goran Bunjevcevic
Goran Bunjevčević is a former Serbian footballer who played as a defender, including 5 seasons at Tottenham Hotspur ....
, Željko Cicović
Željko Cicovic
Željko Cicović is a Serbian football goalkeeper.He played for FK Rad and UD Las Palmas in Spain....
, Slavoljub Muslin
Slavoljub Muslin
Slavoljub Muslin is a Serbian football manager and a former player who currently manages FC Krasnodar...
and others.

FK Rad was founded in 1958, entering competition in the lowest rank. The club was created by workers of the GRO Rad company.

From the start the club had two major local rivals: Banjica and Jajinci, these rivalries were the rivals of the company but quickly it passed to football. The following individuals are considered as club's founders: Petar Đerasimović, the first president, Radojica Tanasijević, the first general selector, Željko Marjanović, the first financial adviser, and Ljubomir Lazić, the first vice president. The players that have played in 1958 can feel like founders as well, FK Rad had a lot of young players that were schooled in the First league teams, some players would include: Lazar Slavković, Đurđe Ivković, Vladimir Acević, Teodor ušnjar, Milan Abramović, Brana Djaković, Aleksandar Banić, Živojin Rafailović, Aleksandar Andrejić, and a little later Sreten "Sele" Antić, Milan "Selja" Jovanović, and others. The first head coach was Nikola Marjanović. The parliament has given the club a pitch in the center of Banjica, a few concrete stands were made, and later locker rooms were added, as well as the restaurant. The club only gets better and year by year FK Rad keeps moving up the league. On the stadium there has always been 2,000 to 3,000 fans. FK Rad had a very good attack from counters and scored many goals that was that kept bringing fans to the stands. The club had a large following in the Banjica region, the fans followed their club away and home. FK Rad quickly got promoted to the Belgrade league. In the period from 1965 to 1969 a change of generations had taken place. At that time the leaders were Ljubomir Lazić and Radomir Antić, notable managers were Đorđević and Đurđević, leaders for the players were Ratomir Janković, Vlada Vlaović, Matović, Zoran Bulatović, Dutina, Čeh and others.

A few years later the club turns to change and the club colors are now different, youth school has received much pressure, the control on the players and much more.

The club's greatest success occurred in 1988–89 season when it finished the Yugoslav league competition in fourth spot, ahead of many richer clubs such as FK Partizan
FK Partizan
Fudbalski klub Partizan is a professional football club based in Belgrade, Serbia. In its long history, FK Partizan won as many as 37 trophies. The club is the holder of 23 national championships, 12 national cups and 1 national supercup, and has also won the Mitropa Cup in 1978...
. This success qualified FK Rad for the UEFA Cup
UEFA Cup
The UEFA Europa League is an annual association football cup competition organised by UEFA since 1971 for eligible European football clubs. It is the second most prestigious European club football contest after the UEFA Champions League...
in the 1989–90 season
UEFA Cup 1989-90
The UEFA Cup 1989-90 was won by Juventus on aggregate over Fiorentina. This was the first final between two Italian sides in the UEFA competitions history and the third between two clubs of the same country....
, where it was eliminated 2–3 on aggregate in the first round by Olympiacos (Rad lost 0–2 in Athens
Athens
Athens , is the capital and largest city of Greece. Athens dominates the Attica region and is one of the world's oldest cities, as its recorded history spans around 3,400 years. Classical Athens was a powerful city-state...
after winning 2–1 on home ground).

FK Rad's supporters call themselves United Force, and are known as some of the most loyal in Serbia
Serbia
Serbia , officially the Republic of Serbia , is a landlocked country located at the crossroads of Central and Southeast Europe, covering the southern part of the Carpathian basin and the central part of the Balkans...
n football
Football (soccer)
Association football, more commonly known as football or soccer, is a sport played between two teams of eleven players with a spherical ball...
. They're also infamous for taking part in many violent acts, both inside and outside various Serbian stadiums.

Aren't going to be considered foreigners in next season:

In this list are included most of the national teams club's players and some other that were influential in the club.