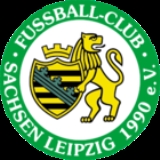 Encyclopedia
FC Sachsen Leipzig was a German football club
Football in Germany
Association football is the most popular sport in Germany. The German Football Association is the sport's national governing body, with 6.6 million members organized in over 26,000 football clubs. There is a league system, with the 1. and 2. Bundesliga on top, and the winner of the first...
from Leipzig
Leipzig
Leipzig Leipzig has always been a trade city, situated during the time of the Holy Roman Empire at the intersection of the Via Regia and Via Imperii, two important trade routes. At one time, Leipzig was one of the major European centres of learning and culture in fields such as music and publishing...
, Saxony
Saxony
The Free State of Saxony is a landlocked state of Germany, contingent with Brandenburg, Saxony Anhalt, Thuringia, Bavaria, the Czech Republic and Poland. It is the tenth-largest German state in area, with of Germany's sixteen states....
. The roots of the club go back to 1899 and the founding of Britannia Leipzig. Following World War I, a 1919 merger with FC Hertha 05 Leipzig created Leipziger Sportverein 1899. Another predecessor side, SV Tura Leipzig, was formed in 1932 and just six years later, in 1938, joined with 1899 to create Tura 1899 Leipzig. The club was dissolved in 2011.

Of these early clubs, only Britannia was of any note competitively, playing in senior level city competition from 1908 to 1910. They re-emerged there in 1922 as SV, but finished at the bottom of the table the next season.

German football was reorganised in 1933 under the Third Reich into 16 premier divisions. Newcomer Tura 32 had been competing in the top flight Gauliga Sachsen
Gauliga Sachsen
The Gauliga Saxony was the highest football league in the German state of Saxony from 1933 to 1945. Shortly after the formation of the league, the Nazis reorganised the administrative regions in Germany, and the Gau Saxony replaced the state Saxony.-Overview:The league was introduced in 1933,...
since 1936 and following its merger with SV, continued in the top flight as SV Tura 1899. The team escaped relegation in 1939 only because of the restructuring of the Gauliga Sachsen into two divisions. However, by 1942 the club's continued lacklustre performance saw them in last place and relegated from the top flight. They earned a return in 1943, but World War II made play untenable and the Gauliga Sachsen broke up into a number of small local city-based leagues. Tura merged with SpVgg Leipzig to briefly form the wartime side KSG Tura / SpVgg Leizig.

Following the war a number of new sports and football clubs were formed, often built around the cores of pre-war clubs: SG Leipzig-Leutzsch was the closest descendant of the old Tura side. In March 1949, Leutzsch, SG Lindenau-Hafen, SG Lindenau-Aue, SG Leipzig-Mitte, and SG Böhlitz-Ehrenberg were united to form ZSG Industrie Leipzig. In August the next year, the club was re-named BSG Chemie Leipzig.

Chemie was dissolved in September 1954 when its players were assigned to Lokomotive Leipzig
Lokomotive Leipzig
1. FC Lokomotive Leipzig is a German football club based in the city of Leipzig in Saxony and may be more familiar to many of the country's football fans as the historic side VfB Leipzig, the first national champions of Germany...
. In 1963, East German football was re-organized with a view towards fostering the development of talent for the country's national side. This time Lok was disassembled to help re-create the club BSG Chemie Leipzig. At the end of May 1990, the club was re-named FC Grün-Weiß Leipzig and in quick succession merged with SV Chemie Böhlen (formerly BSG Chemie Böhlen), forming the current club in August that year.

In March 2009, the club had to declare insolvency
Insolvency
Insolvency means the inability to pay one's debts as they fall due. Usually used to refer to a business, insolvency refers to the inability of a company to pay off its debts.Business insolvency is defined in two different ways:...
for a second time in its history, already having done so in 2001. The administrator finally announced in May 2011 that the club would fold on 30 June 2011.

A BSG Chemie Leipzig club which claims the traditions of the old side, especially the spirit of the 1963–64 championship team, has been reformed. The club had to restart at the lowest level, playing in the 3rd Kreisklasse Leipzig – Staffel 1 in 2008–09.