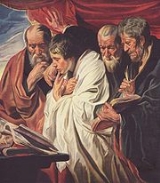 Overview
Evangelism refers to the practice of relaying information about a particular set of beliefs to others who do not hold those beliefs. The term is often used in reference to Christianity
Christianity
Christianity is a monotheistic religion based on the life and teachings of Jesus as presented in canonical gospels and other New Testament writings...
.

Dear all, My name is Doron and I'm from Israel. I wanted to share a thought with you. Next week I will be going to Jerusalem and visit the West...
More
x