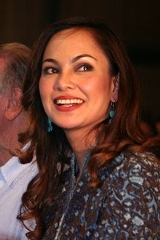 Encyclopedia
María Julia Amorsolo "Eula" Valdez (born December 11, 1968) is a Filipina
Filipino people
The Filipino people or Filipinos are an Austronesian ethnic group native to the islands of the Philippines. There are about 92 million Filipinos in the Philippines, and about 11 million living outside the Philippines ....
actress, best-known for her role in 1980's blockbuster Bagets 1 and 2 and also by playing "Amor Powers" in Pangako sa ’Yo
Pangako sa ’Yo
Pangako Sa ’Yo or The Promise was a primetime soap opera series produced and broadcast by the Philippine media network ABS-CBN. Dubbed as the first "Teleserye" on Philippine Television. It starred Kristine Hermosa and Jericho Rosales as the main characters...
and "Selina Matias" in the remake of Mula Sa Puso
Mula Sa Puso (2011 TV series)
Mula Sa Puso is a Philippine remake of the original 1997 TV series that starred Claudine Barretto, the late Rico Yan and Diether Ocampo airing on ABS-CBN. The 2011 remake stars Lauren Young, JM De Guzman, and Enrique Gil. The show is directed by the same director of the original series, Wenn V....
.

In 1992, she became part of Afternoon Daytime Television In Lira, on GMA-7 She did Movies as a supporting role but her high point was in 2000. when she became a household named Protagonist Antagonist in the Hit Soap Opera Pangako Sayo which is helmed as the Fourth Soap Opera to be the heart of Philippine Daily Viewing and the First International top rating soap of Asia and Nationwide, as she played the Protagonist/Antagonist Amor Powers the series ran from 2000-2002 and re-aired internationally, in 2003 she played opposite Vina Morales in the Hit Primetime Soap Darating Ang Umaga, In 2007, She became part of her last Primetime Soap for ABS-CBN in Maria Flordeluna which was the remake of the Radio Serial Drama helmed by Loida Virina. In 2008, she transferred to GMA-7 she became part of Kamandag, All About Eve, the short lived Saturday Paranormal series E.S.P. and LaLola. In 2009 she went back to ABS-CBN to do the Primetime hit series The Wedding, and The Last Prince in 2010 and the successful afternoon series, Koreana. In 2011, she was part of the remake of Mula Sa Puso. In 20th Anniversary of MMK, she's the #1 most number of episodes (32 episodes, as of now) and she called "MMK" Queen.