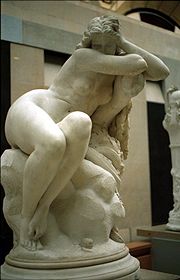 Eugène Delaplanche was a French
French people
The French are a nation that share a common French culture and speak the French language as a mother tongue. Historically, the French population are descended from peoples of Celtic, Latin and Germanic origin, and are today a mixture of several ethnic groups...
sculptor, born at Belleville (Seine).

He was a pupil of Duret
Francisque Joseph Duret
Francisque Joseph Duret was a French sculptor, son and pupil of François-Joseph Duret .He also studied under Bosio, and won the Prix de Rome in 1823. In 1833 he exhibited his "Neapolitan Fisher Dancing the Tarantella", now in the Louvre, a spirited statue in bronze, which established his reputation...
, gained the Prix de Rome
Prix de Rome
The Prix de Rome was a scholarship for arts students, principally of painting, sculpture, and architecture. It was created, initially for painters and sculptors, in 1663 in France during the reign of Louis XIV. It was an annual bursary for promising artists having proved their talents by...
in 1864 (spending 1864-67 at the Villa Medici
Villa Medici
The Villa Medici is a mannerist villa and an architectural complex with a garden contiguous with the larger Borghese gardens, on the Pincian Hill next to Trinità dei Monti in Rome, Italy. The Villa Medici, founded by Ferdinando I de' Medici, Grand Duke of Tuscany and now property of the French...
in Rome), and the medal of honor in 1878. His "Messenger of Love" (1874), "Aurora" (1878), and the "Virgin of the Lillies" (1884), are in the Luxembourg
National Museum of History and Art
The National Museum of History and Art , abbreviated to MNHA, is a museum located in Luxembourg City, in southern Luxembourg. It is dedicated to displaying artworks and artefacts from all epochs of Luxembourgian history...
. Other works by him are "Music" (1878, Paris Opera House), called his masterpiece; "Eve After the Fall" (1869); "Maternal Instruction" (1875, Square of Sainte-Clothilde, Paris); and the statues of "Security" and "Commerce" (1884) in the Hôtel de Ville, Paris (replicas in the Chicago Art Institute). He is also noted for his decorations in relief on vases of Haviland faience
Faience
Faience or faïence is the conventional name in English for fine tin-glazed pottery on a delicate pale buff earthenware body, originally associated with Faenza in northern Italy. The invention of a white pottery glaze suitable for painted decoration, by the addition of an oxide of tin to the slip...
. His best work is naturalistic, but at the same time dignified and simple in line, and shows sound mastery of technique. He is represented by 15 works in the Glyptothek, Copenhagen
Ny Carlsberg Glyptotek
The Ny Carlsberg Glyptotek is an art museum in Copenhagen, Denmark...
, and in many other French museums and in churches.