Encyclopedia
An ethnic stereotype
Stereotype
A stereotype is a popular belief about specific social groups or types of individuals. The concepts of "stereotype" and "prejudice" are often confused with many other different meanings...
is a generalized representation of an ethnic group
Ethnic group
An ethnic group is a group of people whose members identify with each other, through a common heritage, often consisting of a common language, a common culture and/or an ideology that stresses common ancestry or endogamy...
, composed of what are thought to be typical characteristics of members of the group.

Ethnic stereotypes are commonly portrayed in ethnic joke
Ethnic joke
An ethnic joke is a humorous remark relating to an ethnic, racial or cultural group, often referring to a stereotype of the group in question for its punchline....
s. 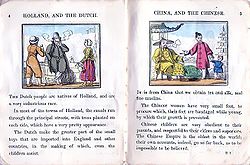