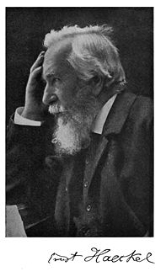 Overview
The "European War" became known as "The Great War", and it was not until 1920, in the book "The First World War 1914-1918" by Charles à Court Repington
Charles à Court Repington
Lieutenant Colonel Charles à Court Repington , CMG, was a British Army officer and war correspondent.-Biography:Charles Repington was born at Heytesbury, Wiltshire in 1858, where his father was a Conservative Party Member of Parliament...
, that the term "First World War" was used as the official name for the conflict.
Haeckel was a zoologist, an accomplished artist and illustrator, and later a professor
Professor
A professor is a scholarly teacher; the precise meaning of the term varies by country. Literally, professor derives from Latin as a "person who professes" being usually an expert in arts or sciences; a teacher of high rank...
of comparative anatomy
Comparative anatomy
Comparative anatomy is the study of similarities and differences in the anatomy of organisms. It is closely related to evolutionary biology and phylogeny .-Description:...
. Although Haeckel's ideas are important to the history of evolutionary theory, and he was a competent invertebrate
Invertebrate
An invertebrate is an animal without a backbone. The group includes 97% of all animal species – all animals except those in the chordate subphylum Vertebrata .Invertebrates form a paraphyletic group...
anatomist most famous for his work on radiolaria, many speculative concepts that he championed are now considered incorrect.

Is it true Haeckel's drawings of embryos do not match what we see under a microscope? That he faked drawings and was proven guilty and thrown out of h...
More
x