Encyclopedia
Ernesto Lecuona y Casado (August 6, 1895 - November 29, 1963) was a Cuba
Cuba
The Republic of Cuba is an island nation in the Caribbean. The nation of Cuba consists of the main island of Cuba, the Isla de la Juventud, and several archipelagos. Havana is the largest city in Cuba and the country's capital. Santiago de Cuba is the second largest city...
n composer and pianist of Canarian
Canarian people
The Canarians are an ethnic group living in the archipelago of the Canary Islands , near the coast of Western Africa...
father and Cuban mother, and worldwide fame. He composed over six hundred pieces, mostly in the Cuban vein, and was a pianist of exceptional quality.

Lecuona was born in Guanabacoa, Havana
Havana
Havana is the capital city, province, major port, and leading commercial centre of Cuba. The city proper has a population of 2.1 million inhabitants, and it spans a total of — making it the largest city in the Caribbean region, and the most populous...
, Cuba
Cuba
The Republic of Cuba is an island nation in the Caribbean. The nation of Cuba consists of the main island of Cuba, the Isla de la Juventud, and several archipelagos. Havana is the largest city in Cuba and the country's capital. Santiago de Cuba is the second largest city...
. He started studying piano
Piano
The piano is a musical instrument played by means of a keyboard. It is one of the most popular instruments in the world. Widely used in classical and jazz music for solo performances, ensemble use, chamber music and accompaniment, the piano is also very popular as an aid to composing and rehearsal...
at an early age, under his sister Ernestina Lecuona
Ernestina Lecuona Casado
Ernestina Lecuona y Casado was a Cuban pianist, music educator and composer.-Life:Ernestina Lecuona y Casado was born in Matanzas into a musical family. Her brother was pianist and composer Ernesto Lecuona and Leo Brouwer was her grandson...
, a famed composer in her own right. He later studied at the Peyrellade Conservatoire under Antonio Saavedra and the famous Joaquin Nin
Joaquin Nin
Joaquín Nin y Castellanos was a Spanish-Cuban pianist and composer.-Biography:Nin studied piano with Moritz Moszkowski and composition at the Schola Cantorum . He toured as a pianist and was known as a composer and arranger of popular Spanish folk music...
. Lecuona graduated from the National Conservatory of Havana with a Gold Medal for interpretation when he was sixteen. And he performed outside of Cuba at the Aeolian Hall (New York)
Aeolian Hall (New York)
Aeolian Hall was a concert hall near Times Square in Midtown Manhattan, New York City located on the third floor of 29-33 West 42nd Street across the street from Bryant Park. The Aeolian Building was built in 1912 for the Aeolian Company, which manufactured pianos...
in 1916. 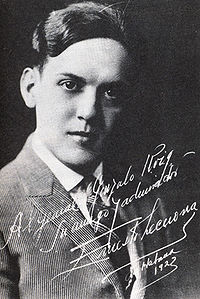 He first travelled to Spain in 1924 on a concert tour with violinist Marta de la Torre; his successful piano recitals in 1928 at Paris coincided with a rise in interest in Cuban music.

He was a prolific composer of songs and music for stage and film. His works consisted of zarzuela
Zarzuela
Zarzuela is a Spanish lyric-dramatic genre that alternates between spoken and sung scenes, the latter incorporating operatic and popular song, as well as dance...
, Afro-Cuban and Cuban rhythms, suites and many songs which are still very famous. They include Siboney
Siboney (song)
Siboney is a 1929 classic Cuban song by Ernesto Lecuona. The music is in cut time, originally written in C major. The lyrics were reportedly written by Lucuona while away from Cuba and is about the homesickness he is experiencing .Siboney became a hit in 1931 when performed by the Cuban singer...
(Canto Siboney), Malagueña and The Breeze And I
The Breeze and I
"The Breeze and I" is a popular song.The song is based on a Spanish language song, "Andalucia." The music to the original song was written by Ernesto Lecuona, with Spanish lyrics by Emilio de Torre; the English language lyric was written by Al Stillman....
(Andalucía). In 1942, his great hit, Always in my heart (Siempre en mi Corazon) was nominated for an Oscar for Best Song; however, it lost to White Christmas. Lecuona was a master of the symphonic form and conducted the Ernesto Lecuona Symphonic Orchestra, employing soloists including Cuban pianist and composer Carmelina Delfin
Carmelina Delfin
Carmelina Delfin was a Cuban composer and pianist. Delfin was born in Havana and in the 1920s performed as a soloist with Ernesto Lecuona in his Ernesto Lecuona Symphonic Orchestra...
. The Orchestra performed in the Cuban Liberation Day Concert at Carnegie Hall on October 10, 1943. The concert included the world premiere of Lecuona's Black Rhapsody. Lecuona gave help and the use of his name to the popular touring group, the Lecuona Cuban Boys
Lecuona Cuban Boys
The Lecuona Cuban Boys was a popular Cuban orchestra which toured the world for over forty years.The band was founded by Ernesto Lecuona, whose role was that of a patron-entrepreneur. He did not actually play with the band, but sometimes gave a piano recital before the band played. The core of the...
, though he did not play as a member of the band. He did sometimes play piano solos as the first item on the bill.

In 1960, thoroughly unhappy with Castro's new régime, Lecuona moved to Tampa. Lecuona lived his final years in the US. He died 3 years later at Santa Cruz de Tenerife
Santa Cruz de Tenerife
Santa Cruz de Tenerife is the capital , second-most populous city of the Autonomous Community of the Canary Islands and the 21st largest city in Spain, with a population of 222,417 in 2009...
at age 68, and is interred at Gate of Heaven Cemetery
Gate of Heaven Cemetery
The Gate of Heaven Cemetery, approximately 25 miles north of New York City, was established in 1917 at 10 West Stevens Ave. in Hawthorne, Westchester County, New York, United States, as a Roman Catholic burial site...
in Hawthorne
Hawthorne, New York
Hawthorne is an unincorporated hamlet and census-designated place located in the town of Mount Pleasant in Westchester County, New York. The population was 4,586 at the 2010 census.-History:...
, New York
New York
New York is a state in the Northeastern region of the United States. It is the nation's third most populous state. New York is bordered by New Jersey and Pennsylvania to the south, and by Connecticut, Massachusetts and Vermont to the east...
; his will instructs that his remains be repatriated once the current régime runs its course. A great deal of Lecuona's music was first introduced to mass American audiences by Desi Arnaz
Desi Arnaz
Desi Arnaz was a Cuban-born American musician, actor and television producer. While he gained international renown for leading a Latin music band, the Desi Arnaz Orchestra, he is probably best known for his role as Ricky Ricardo on the American TV series I Love Lucy, starring with Lucille Ball, to...
, a fellow Cuban and Lucille Ball's spouse. 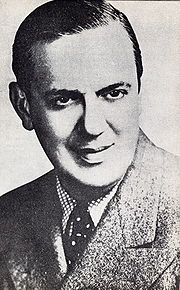 Ernesto and Ernestina's cousin Margarita Lecuona was another accomplished musician and composer. She was the author of the song "Babalú
Babalu (song)
Babalu is the title of a Cuban song, written by Margarita Lecuona, the cousin of composers Ernestina and Ernesto Lecuona. The song title is either a reference to the Santería deity Babalu Aye or to Babalawo, the title of a Santería priest and diviner....
", made popular in the Latin American world by Miguelito Valdés
Miguelito Valdés
Miguelito Valdés, born Miguel Ángel Eugenio Lázaro Zacarias Izquierdo Valdés Hernández , also called Mr. Babalú, was a Cuban popular singer of high quality...
, and in the United States by Desi Arnaz
Desi Arnaz
Desi Arnaz was a Cuban-born American musician, actor and television producer. While he gained international renown for leading a Latin music band, the Desi Arnaz Orchestra, he is probably best known for his role as Ricky Ricardo on the American TV series I Love Lucy, starring with Lucille Ball, to...
(who, contrary to popular folk lore, did not write the song). 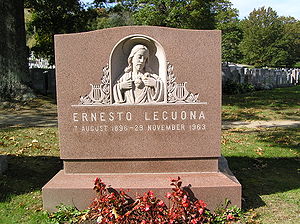