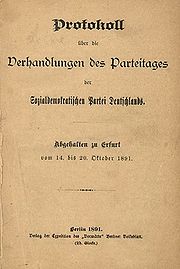 The Erfurt Program was adopted by the Social Democratic Party of Germany
Social Democratic Party of Germany
The Social Democratic Party of Germany is a social-democratic political party in Germany...
during the SPD congress at Erfurt
Erfurt
Erfurt is the capital city of Thuringia and the main city nearest to the geographical centre of Germany, located 100 km SW of Leipzig, 150 km N of Nuremberg and 180 km SE of Hannover. Erfurt Airport can be reached by plane via Munich. It lies in the southern part of the Thuringian...
in 1891. Formulated under the political guidance of Eduard Bernstein
Eduard Bernstein
Eduard Bernstein was a German social democratic theoretician and politician, a member of the SPD, and the founder of evolutionary socialism and revisionism.- Life :...
, August Bebel
August Bebel
Ferdinand August Bebel was a German Marxist politician, writer, and orator. He is best remembered as one of the founders of the Social Democratic Party of Germany.-Early years:...
, and Karl Kautsky
Karl Kautsky
Karl Johann Kautsky was a Czech-German philosopher, journalist, and Marxist theoretician. Kautsky was recognized as among the most authoritative promulgators of Orthodox Marxism after the death of Friedrich Engels in 1895 until the coming of World War I in 1914 and was called by some the "Pope of...
, it superseded the earlier Gotha Program
Gotha Program
The Gotha Program was the name given to the party platform adopted by the nascent German Social Democratic Party at its initial party congress, held in the town of Gotha in 1875. The program called for universal suffrage, freedom of association, limits on the working day, and for other laws...
.

The program declared the imminent death of capitalism
Capitalism
Capitalism is an economic system that became dominant in the Western world following the demise of feudalism. There is no consensus on the precise definition nor on how the term should be used as a historical category...
and the necessity of socialist ownership of the means of production
Means of production
Means of production refers to physical, non-human inputs used in production—the factories, machines, and tools used to produce wealth — along with both infrastructural capital and natural capital. This includes the classical factors of production minus financial capital and minus human capital...
. The party intended to pursue these goals through legal political participation rather than by revolutionary activity. Kautsky
Karl Kautsky
Karl Johann Kautsky was a Czech-German philosopher, journalist, and Marxist theoretician. Kautsky was recognized as among the most authoritative promulgators of Orthodox Marxism after the death of Friedrich Engels in 1895 until the coming of World War I in 1914 and was called by some the "Pope of...
argued that because capitalism by its very nature must collapse, the immediate task for socialists was to work for the improvement of workers' lives rather than for the revolution
Revolution
A revolution is a fundamental change in power or organizational structures that takes place in a relatively short period of time.Aristotle described two types of political revolution:...
, which was inevitable.

Karl Kautsky also wrote the official SPD commentary on the program, which was called The Class Struggle. The simplified Marxism exemplified by The Class Struggle is sometimes referred to as 'vulgar Marxism' or the 'Marxism of the Second International
Second International
The Second International , the original Socialist International, was an organization of socialist and labour parties formed in Paris on July 14, 1889. At the Paris meeting delegations from 20 countries participated...
'. The popular renderings of Marxism found in the works of Kautsky and Bebel were read and distributed more widely in Europe between the late 19th century and 1914 than Marx's own works. The Class Struggle was translated into sixteen languages before 1914 and became the accepted popular summation of Marxist theory. This document came to define 'orthodox'
Orthodox Marxism
Orthodox Marxism is the term used to describe the version of Marxism which emerged after the death of Karl Marx and acted as the official philosophy of the Second International up to the First World War and of the Third International thereafter...
socialist theory before the October Revolution
October Revolution
The October Revolution , also known as the Great October Socialist Revolution , Red October, the October Uprising or the Bolshevik Revolution, was a political revolution and a part of the Russian Revolution of 1917...
of 1917 caused a major split in the international socialist movement.