Encyclopedia
Equine conformation evaluates the degree of correctness of a horse's bone structure, musculature, and its body proportions in relation to each other. Undesirable conformation can limit the ability to perform a specific task. Although there are several universal "faults," a horse's conformation is usually judged by what its intended use may be. Thus "form to function" is one of the first set of traits considered in judging conformation. A horse with poor form for a Grand Prix show jumper could have excellent conformation for a World Champion cutting horse
Cutting (sport)
Cutting is an equestrian event in the western riding style where a horse and rider are judged on their ability to separate a single animal away from a cattle herd and keep it away for a short period of time.-Description:...
, or to be a champion draft horse
Draft horse
A draft horse , draught horse or dray horse , less often called a work horse or heavy horse, is a large horse bred for hard, heavy tasks such as ploughing and farm labour...
. Every horse has good and bad points of its conformation and many horses (including Olympic caliber horses) excel even with conformation faults.


Conformation of the head and neck

The standard of the ideal head varies dramatically from breed to breed based on a mixture of the role the horse is bred for and what breeders, owners and enthusiasts find appealing. Breed standards frequently cite large eyes, a broad forehead and a dry head-to-neck connection as important to correctness about the head. Traditionally, the length of head as measured from poll to upper lip should be two-thirds the length of the neck topline (measured from poll to withers). Presumably, the construction of the horse's head influences its breathing, though there are few studies to support this. Historically, a width of 4 fingers or 7.2 cm was associated with an unrestricted airflow and greater endurance. However, a study in 2000 which compared the intermandibular width-to-size ratio of Thoroughbreds with their racing success showed this to be untrue. The relationship between head conformation and performance are not well-understood, and an appealing head may be more a matter of marketability than performance.
Among mammals, morphology
Morphology (biology)
In biology, morphology is a branch of bioscience dealing with the study of the form and structure of organisms and their specific structural features....
of the head often plays a role in temperature regulation. Many ungulates have a specialized network of blood vessels called the carotid rete, which keeps the brain cool while the body temperature rises during exercise. Horses lack a carotid rete and instead use their sinuses to cool blood around the brain. These factors suggest that the conformation of a horse's head influences its ability to regulate temperature. 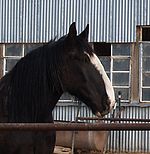 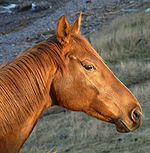 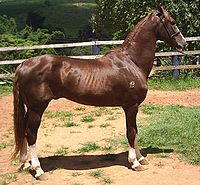 
Conformation of the shoulder, forearm, and chest 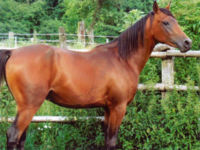 Laid-back or sloping shoulder
----
The Humerus (a.k.a the arm bone)

The arm bone is from the point of shoulder to the elbow, it is covered in heavy muscle and serves as a leverage point for the muscle of the front leg attached near the elbow.

"Too Long Humerus"
note "standing under" simply means that the horses legs are too far under his body and his chest sticks out.

note: that is the shoulder is too angled (less than 45 degrees) then the horse's front legs will be stilted and stiff.
----
The Elbow

"Turned in/ Tied in Elbow"

The Shape of the horse's chest plays a significant role in his level of endurance and stamina. A horse that will do slow, steady work might not be hampered by chest conformation that limits lung capacity, but any other horse that will do work requiring speed, power, or endurance needs as much room as possible for maximum lung expansion. The horse's ribs form the outer surface of the chest and define the appearance of the horse's midsection, or Barrel, the area between the front legs and hindquarters.

Chest Shape
When viewing the chest from the front, the chest should be wider at the bottom than at the top. The shoulder blades should be much closer together at their tops, toward their withers, than at the points of shoulders where the front legs attach. 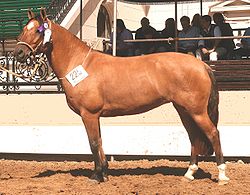 The croup is from the lumbosacral joint
Lumbosacral joint
The lumbosacral joint is a joint of the body, between the last lumbar vertebra and the first sacral segment of the spinal cord....
to the tail. The "hip" refers to the line running from the ilium (point of the hip) to the ischium (point of the buttock)of the pelvis. After the point that is made by the sacrum and lumbar vertebrae, the line following is referred to as the croup. While the two are linked in terms of length and musculature, the angle of the hip and croup do not necessarily correlate. But it is desirable for a horse to have a square to slightly pear shaped rump. A horse can have a relatively flat croup and a well-angled hip. Racehorses do well with hip angles of 20-30 degrees, trotting horses with 35 degrees. Once a horse is developed, the croup should be approximately the same height as the withers. In some breeds a high croup is hereditary trait. 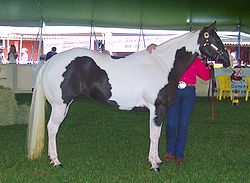 
Wry Tail/ Tail Carried to One Side


Good Depth of Back

Conformation of the hindquarters and hips

Conformation of the front and hind legs

The Cannon and Tendons

Tied-in Below the Knee

The Front Legs- The Knee 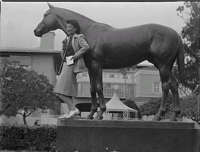 Bucked, Sprung, or Goat Knees/ Over at the Knee http://www.castletonlyons.com/images/toccet-conformation.jpg

The Front Legs- The Fetlock

Cut Out Under the Hock 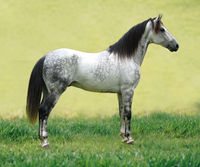 
Conformation of the pasterns

The angle of the pasterns is best at a moderate slope (about 50 degrees) and moderate length.


Conformation of the feet and base 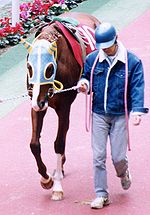 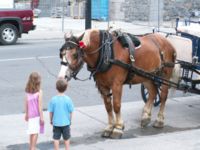 Base Narrow in Front: Toed-Out or Toed-In

Base Wide in Front: Toed-In or Toed-Out 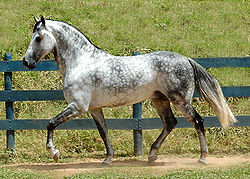 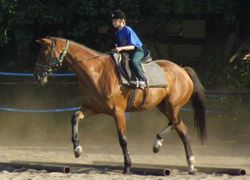