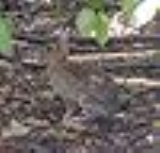 Epitheres are though to have appeared in the early part of the Late Cretaceous
Late Cretaceous
The Late Cretaceous is the younger of two epochs into which the Cretaceous period is divided in the geologic timescale. Rock strata from this epoch form the Upper Cretaceous series...
age. Before the end of the Mesozoic
Mesozoic
The Mesozoic era is an interval of geological time from about 250 million years ago to about 65 million years ago. It is often referred to as the age of reptiles because reptiles, namely dinosaurs, were the dominant terrestrial and marine vertebrates of the time...
Era, ancestral forms of most of the living orders (such as the ungulate
Ungulate
Ungulates are several groups of mammals, most of which use the tips of their toes, usually hoofed, to sustain their whole body weight while moving. They make up several orders of mammals, of which six to eight survive...
s and the insectivores
Insectivora
The order Insectivora is a now-abandoned biological grouping within the class of mammals...
) had already appeared. After the extinction of non-avian
Bird
Birds are feathered, winged, bipedal, endothermic , egg-laying, vertebrate animals. Around 10,000 living species and 188 families makes them the most speciose class of tetrapod vertebrates. They inhabit ecosystems across the globe, from the Arctic to the Antarctic. Extant birds range in size from...
dinosaur
Dinosaur
Dinosaurs are a diverse group of animals of the clade and superorder Dinosauria. They were the dominant terrestrial vertebrates for over 160 million years, from the late Triassic period until the end of the Cretaceous , when the Cretaceous–Paleogene extinction event led to the extinction of...
s (in the Early Paleocene
Paleocene
The Paleocene or Palaeocene, the "early recent", is a geologic epoch that lasted from about . It is the first epoch of the Palaeogene Period in the modern Cenozoic Era...
), the epitheres' diversity exploded, and by the end of the Eocene, all living orders of Epitheria had appeared. Epitheres are one of the most successful groups of animals.

Monophyly
Monophyly
In common cladistic usage, a monophyletic group is a taxon which forms a clade, meaning that it contains all the descendants of the possibly hypothetical closest common ancestor of the members of the group. The term is synonymous with the uncommon term holophyly...
of Epitheria has been challenged by molecular phylogenetic
Molecular phylogeny
Molecular phylogenetics is the analysis of hereditary molecular differences, mainly in DNA sequences, to gain information on an organism's evolutionary relationships. The result of a molecular phylogenetic analysis is expressed in a phylogenetic tree...
studies. While preliminary analysis of a set of retroposon
Retroposon
Retroposons are repetitive DNA fragments which are inserted into chromosomes after they had been reverse transcribed from any RNA molecule. In contrast to retrotransposons, they never encode Reverse Transcriptase . Therefore, they are non-autonomous elements with regard to transposition activity...
s shared by both Afrotheria
Afrotheria
Afrotheria is a clade of mammals, the living members of which belong to groups from Africa or of African origin: golden moles, sengis , tenrecs, aardvarks, hyraxes, elephants and sea cows. The common ancestry of these animals was not recognized until the late 1990s...
, and Boreoeutheria
Boreoeutheria
Boreoeutheria is a clade of placental mammals that is composed of the sister taxa Laurasiatheria and Euarchontoglires...
(presence/absence data
Retrotransposon Marker
Retrotransposon markers are retrotransposons that are used as cladistic markers.The analysis of SINEs – Short INterspersed Elements – LINEs – Long INterspersed Elements – or truncated LTRs – Long Terminal Repeats – as molecular cladistic markers represents a particularly interesting complement to...
) supported the Epitheria clade, more extensive analysis of such transposable element insertions around the time of the divergence of Xenarthra, Afrotheria, and Boreoeutheria strongly support the hypothesis of a near-concomitant origin (trifurcation) of these three superorders of mammals.