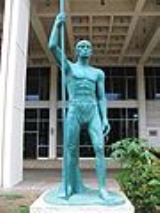 Encyclopedia
Enriquillo was a Taíno
Taíno people
The Taínos were pre-Columbian inhabitants of the Bahamas, Greater Antilles, and the northern Lesser Antilles. It is thought that the seafaring Taínos are relatives of the Arawak people of South America...
Cacique
Cacique
Cacique is a title derived from the Taíno word for the pre-Columbian chiefs or leaders of tribes in the Bahamas, Greater Antilles, and the northern Lesser Antilles...
who rebelled against the Spaniards from 1519 to 1533. His father was killed while attending peace talks with the Spanish, along with eighty other regional chieftains under the direction of his aunt Anacaona
Anacaona
Anacaona , also called the Golden Flower, was a Taíno cacica , sister of Bohechío, chief of Jaragua, and wife of Caonabo, chief of the nearby territory of Maguana, two of the five highest caciques who ruled the island of Hispaniola when the Spaniards settled there in 1492...
in Jaragua. During the talks, Spanish soldiers set the meeting house on fire and proceeded to kill anyone who fled the flames. Enriquillo was then raised in a monastery in Santo Domingo
Santo Domingo
Santo Domingo, known officially as Santo Domingo de Guzmán, is the capital and largest city in the Dominican Republic. Its metropolitan population was 2,084,852 in 2003, and estimated at 3,294,385 in 2010. The city is located on the Caribbean Sea, at the mouth of the Ozama River...
. One of his mentors was Bartolomé de Las Casas
Bartolomé de Las Casas
Bartolomé de las Casas O.P. was a 16th-century Spanish historian, social reformer and Dominican friar. He became the first resident Bishop of Chiapas, and the first officially appointed "Protector of the Indians"...
.

Good relations between Christopher Columbus
Christopher Columbus
Christopher Columbus was an explorer, colonizer, and navigator, born in the Republic of Genoa, in northwestern Italy. Under the auspices of the Catholic Monarchs of Spain, he completed four voyages across the Atlantic Ocean that led to general European awareness of the American continents in the...
and the indigenous Taíno of the island Columbus called Hispaniola
Hispaniola
Hispaniola is a major island in the Caribbean, containing the two sovereign states of the Dominican Republic and Haiti. The island is located between the islands of Cuba to the west and Puerto Rico to the east, within the hurricane belt...
did not last more than a few days; after Columbus had tortured and killed many trying to force them to provide him with gold, he turned to slavery and sugar cane plantations as a way to profit from his voyages.

Several revolts followed in the first half of the 16th century, the most famous of which happened in 1522. Enriquillo started the revolt with a large number of Indians from the mountain range of Bahoruco and the Indians were able to continue the rebellion because of their better knowledge of the region. As the Spaniards were not able to control the rebellion, a treaty was signed granting to the Indian population among others the right of Freedom
Freedom (political)
Political freedom is a central philosophy in Western history and political thought, and one of the most important features of democratic societies...
and of Possession
Ownership
Ownership is the state or fact of exclusive rights and control over property, which may be an object, land/real estate or intellectual property. Ownership involves multiple rights, collectively referred to as title, which may be separated and held by different parties. The concept of ownership has...
. It had little consequences however, as by this time the Indian population was rapidly declining due to European diseases.

Enriquillo also had a wife, called Mencía, later Doña Mencía due to Enriquillo's relations with the Spaniards. She was molested by a Spaniard named Valenzuela. When Enriquillo tried to take the issue to the Spanish courts, nothing could be done, since it was Mencia's word against the Spaniard's word. This, according to some writers, was the tipping point for Enriquillo which led to his revolt in the Bahoruco mountains.

Most historians agree that Enriquillo was the same person as the cacique Guarocuya which would mean that Enriquillo belonged to the highest house of the Jaragua cacicazgo. Guarocuya was the nephew of Anacaona
Anacaona
Anacaona , also called the Golden Flower, was a Taíno cacica , sister of Bohechío, chief of Jaragua, and wife of Caonabo, chief of the nearby territory of Maguana, two of the five highest caciques who ruled the island of Hispaniola when the Spaniards settled there in 1492...
, sister to the cacique of Jaragua Bohechío
Bohechío
Bohechío is a town in the San Juan province of the Dominican Republic.It is located northeast of the km 25 of Azua road - San Juan at a distance of 26.5 km and 43 km from San Juan Province , 205 km from the capital city and 92 km of the Province Azua , nestled between mountains at the foot of the...
and his eventual successor once Bohechío was killed. Anacaona was married to Caonabo who was the cacique of the neighboring Maguana kingdom. A minority of historians, however, claim that Guarocuya was captured and hanged, while Enriquillo succeeded in his revolt. Most historians believe both rebels were the same person, arguing that the tales of Guarocuya's demise are identical to the more verifiable accounts of the capture and execution of his aunt Anacaona and the stories have been confounded. It is also well documented that the character of Enriquillo was married to Mencía, the mestizo granddaughter of Anacaona.

His name Enriquillo would come after his baptism as a Catholic and his new given name, Enrique, in which the Enriquillo name referred to his short stature.

The salt water lake Lago Enriquillo in the Dominican
Dominican Republic
The Dominican Republic is a nation on the island of La Hispaniola, part of the Greater Antilles archipelago in the Caribbean region. The western third of the island is occupied by the nation of Haiti, making Hispaniola one of two Caribbean islands that are shared by two countries...
province of Baoruco was named after him. Looking out over it is the Trono de Enriquillo, where he is said to have camped during the rebellion.