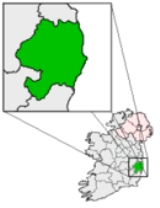 Encyclopedia
Enniskerry is a village in County Wicklow
County Wicklow
County Wicklow is a county in Ireland. It is part of the Mid-East Region and is also located in the province of Leinster. It is named after the town of Wicklow, which derives from the Old Norse name Víkingalág or Wykynlo. Wicklow County Council is the local authority for the county...
, Ireland
Republic of Ireland
Ireland , described as the Republic of Ireland , is a sovereign state in Europe occupying approximately five-sixths of the island of the same name. Its capital is Dublin. Ireland, which had a population of 4.58 million in 2011, is a constitutional republic governed as a parliamentary democracy,...
. It had a population of 2,672 at the 2006 census. 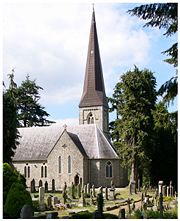 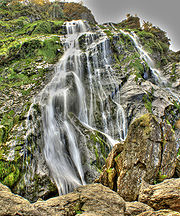 The town is situated on the Glencullen River in the foothills of the Wicklow Mountains
Wicklow Mountains
The Wicklow Mountains form the largest continuous upland area in Ireland. They occupy the whole centre of County Wicklow and stretch outside its borders into Counties Carlow, Wexford and Dublin. Where the mountains extend into County Dublin, they are known locally as the Dublin Mountains...
to the east of the island, just 5 minutes south of the Dublin border and some 24 km (15 mi) south of Dublin city centre. The R117 road
R117 road
The R117 road is a regional road in Ireland. The route starts Harcourt Road at the end of the South Circular Road on the southside of Dublin city centre...
, colloquially known as "The Twenty-One Bends" connects the town to the main N11 road to Dublin. The 185 Dublin Bus
Dublin Bus
Dublin Bus is a public transport operator in Ireland. It operates an extensive bus network of 172 radial, cross-city and peripheral routes and 18 night routes in the city of Dublin and the Greater Dublin Area. The company, established in 1987, is a subsidiary of Córas Iompair Éireann which is...
route connects the village hourly to Bray
Bray
Bray is a town in north County Wicklow, Ireland. It is a busy urban centre and seaside resort, with a population of 31,901 making it the fourth largest in Ireland as of the 2006 census...
, the nearest large town.

Powerscourt Estate
Powerscourt Estate
Powerscourt Estate , located near Enniskerry, County Wicklow, Ireland, is a large country estate which is noted for its house and landscaped gardens, today occupying 19 hectares . The house, originally a 13th century castle, was extensively altered during the 18th century by German architect...
, comprising a large house and gardens today occupying 47 acres (190,202.4 m²), is located near the town and is a popular visitor attraction. The extensive formal gardens form the grounds of an 18th century Palladian house, designed by Richard Cassels
Richard Cassels
Richard Cassels , who anglicised his name to Richard Castle, ranks with Edward Lovett Pearce as one of the greatest architects working in Ireland in the 18th century. Cassels was born in 1690 in Kassel, Germany. Although German, his family were of French origin, descended from the...
, which was destroyed by fire in 1974, and lay as a shell until extensive restorations were carried out in 1996.

The village has been the set for numerous television advertisements. From 1996 to 2001, along with Avoca
Avoca, County Wicklow
Avoca is a small town near Arklow, in County Wicklow, Ireland. It is situated on the River Avoca.The Avoca area has been associated with its famous copper mines for many years and the valley has been immortalised by Thomas Moore in the famous song The Meeting of the Waters...
, it played host to the television series Ballykissangel
Ballykissangel
Ballykissangel is a BBC television drama set in Ireland, produced in-house by BBC Northern Ireland. The original story revolved around a young English Roman Catholic priest as he became part of a rural community. It ran for six series, which were first broadcast on BBC One in the UK from 1996 to 2001...
. On March 16, 2009 Meredith Vieira
Meredith Vieira
Meredith Louise Vieira is an American journalist, television personality, and game show host. She is best known for her roles as the original moderator of the ABC talk program The View and co-host of the long-running NBC News morning news program, Today...
and Al Roker
Al Roker
Albert Lincoln "Al" Roker, Jr. is an American television meteorologist as well as an actor and book author. He is best known as being the weather anchor on NBC's Today. On Monday, July 20, 2009, he began co-hosting his new morning show, Wake Up with Al, on The Weather Channel, which airs weekdays...
broadcast live in Enniskerry for NBC's Today Show.

The Bray and Enniskerry Railway was proposed in the 19th century, to link the town to Bray. Some initial work was carried out, including building a bridge to carry the railway over Dublin Corporation
Dublin Corporation
Dublin Corporation , known by generations of Dubliners simply as The Corpo, is the former name given to the city government and its administrative organisation in Dublin between 1661 and 1 January 2002...
's Vartry
Vartry Reservoir
Vartry Reservoir is a reservoir at Roundwood in County Wicklow, Ireland. The water is piped from Vartry to a large open service reservoir in Stillorgan in the southern suburbs of Dublin. The reservoir is operated by Dublin City Council....
watermain. Wicklow County Council
Wicklow County Council
Wicklow County Council is the local authority which is responsible for County Wicklow in Ireland. The Council is responsible for Housing and Community, Roads and Transportation, Urban planning and Development, Amenity and Culture, and Environment. The head of the council has the title of...
recently removed much of the railway embankment in road widening, but left the bridge, which is directly opposite the ornate bridge carrying the watermain over the Cookstown River, a tributary of the River Dargle. The plan ran into financial difficulties, and the rails were lifted and sold off.

Two Dublin Bus
Dublin Bus
Dublin Bus is a public transport operator in Ireland. It operates an extensive bus network of 172 radial, cross-city and peripheral routes and 18 night routes in the city of Dublin and the Greater Dublin Area. The company, established in 1987, is a subsidiary of Córas Iompair Éireann which is...
routes, the 44 and 185, pass through the village.