EIA is the Nation's premier source of energy information and, by law, its data, analyses, and forecasts are independent of approval by any other officer or employee of the United States government.

The Department of Energy Organization Act of 1977 established EIA as the primary federal government authority on energy statistics and analysis, building upon systems and organizations first established in 1974 following the oil market disruption of 1973.

EIA disseminates its data products, analyses, reports, and services to customers and stakeholders primarily through its website and the customer contact center. EIA programs cover data on coal
Coal
Coal is a combustible black or brownish-black sedimentary rock usually occurring in rock strata in layers or veins called coal beds or coal seams. The harder forms, such as anthracite coal, can be regarded as metamorphic rock because of later exposure to elevated temperature and pressure...
, petroleum
Petroleum
Petroleum or crude oil is a naturally occurring, flammable liquid consisting of a complex mixture of hydrocarbons of various molecular weights and other liquid organic compounds, that are found in geologic formations beneath the Earth's surface. Petroleum is recovered mostly through oil drilling...
, natural gas
Natural gas
Natural gas is a naturally occurring gas mixture consisting primarily of methane, typically with 0–20% higher hydrocarbons . It is found associated with other hydrocarbon fuel, in coal beds, as methane clathrates, and is an important fuel source and a major feedstock for fertilizers.Most natural...
, electric
Electric power
Electric power is the rate at which electric energy is transferred by an electric circuit. The SI unit of power is the watt.-Circuits:Electric power, like mechanical power, is represented by the letter P in electrical equations...
, renewable
Renewable energy
Renewable energy is energy which comes from natural resources such as sunlight, wind, rain, tides, and geothermal heat, which are renewable . About 16% of global final energy consumption comes from renewables, with 10% coming from traditional biomass, which is mainly used for heating, and 3.4% from...
and nuclear
Nuclear power
Nuclear power is the use of sustained nuclear fission to generate heat and electricity. Nuclear power plants provide about 6% of the world's energy and 13–14% of the world's electricity, with the U.S., France, and Japan together accounting for about 50% of nuclear generated electricity...
energy.

Located in Washington, DC, EIA is an organization of about 380 federal employees, with an annual budget of $95.4 million in Fiscal Year 2011. The 2011 budget is 14 percent below the funding level in FY 2010 and required significant cuts in EIA's data, analysis, and forecasting activities. In addition to program changes, EIA also cut live telephone support at its Information Center. EIA's FY 2011 Congressional Budget submission, as well as its FY 2012 Congressional Budget submission, can be viewed at http://www.cfo.doe.gov/crorg/cf30.htm.

By law, EIA's products are prepared independently of policy considerations. EIA neither formulates nor advocates any policy conclusions. The Department of Energy Organization Act allows EIA's processes and products to be independent from review by Executive Branch officials; specifically, Section 205(d) says: 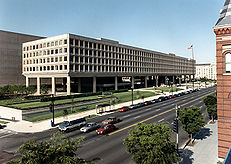 More than 2 million people use EIA's information online each month. Some of EIA's most popular products include:

The Federal Energy Administration Act of 1974
Energy Reorganization Act of 1974
The Energy Reorganization Act of 1974 is a United States federal law that established the Nuclear Regulatory Commission. Under the Atomic Energy Act of 1954, a single agency, the U.S. Atomic Energy Commission, had responsibility for the development and production of nuclear weapons and for both...
, Public Law 93-275, as amended, created the first U.S. agency with the primary focus on energy and mandated it to collect, assemble, evaluate, and analyze energy information. It also provided FEA with data collection enforcement authority for gathering data from energy producing and major consuming firms. Section 52 of the FEA Act mandated establishment of the National Energy Information System to "…contain such energy information as is necessary to carry out the Administration’s statistical and forecasting activities…"

...central, comprehensive, and unified energy data and information program which will collect, evaluate, assemble, analyze, and disseminate data and information which is relevant to energy resource reserves, energy production, demand, and technology, and related economic and statistical information, or which is relevant to the adequacy of energy resources to meet demands in the near and longer term future for the Nation’s economic and social needs.

The same law established that EIA's processes and products are independent from review by Executive Branch officials.

The majority of EIA energy data surveys are based on the general mandates set forth above. However, there are some surveys specifically mandated by law, including: