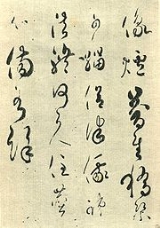 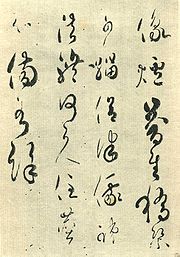 Emperor Saga was the second son of Emperor Kammu
Emperor Kammu
was the 50th emperor of Japan, according to the traditional order of succession. Kammu reigned from 781 to 806.-Traditional narrative:Kammu's personal name was . He was the eldest son of Prince Shirakabe , and was born prior to Shirakabe's ascension to the throne...
, and younger brother of Emperor Heizei
Emperor Heizei
, also known as Heijō-tennō. was the 51st emperor of Japan, according to the traditional order of succession. Heizei's reign lasted from 806 to 809.-Traditional narrative:...
by the same mother. He had nine Empresses and consorts; and 47 Imperial sons and daughters. His personal name was . Saga was an "accomplished calligrapher" able to compose in Chinese who held the first imperial poetry competitions (naien). According to legend, he was the first Japanese emperor to drink tea
Tea
Tea is an aromatic beverage prepared by adding cured leaves of the Camellia sinensis plant to hot water. The term also refers to the plant itself. After water, tea is the most widely consumed beverage in the world...
.

Emperor Saga is traditionally venerated at his tomb; the Imperial Household Agency
Imperial Household Agency
The is a government agency of Japan in charge of the state matters concerning Japan's imperial family and also keeping the Privy Seal and the State Seal...
designates , in Ukyō-ku, Kyoto
Ukyo-ku, Kyoto
is one of the eleven wards in the city of Kyoto, in Kyoto Prefecture, Japan. The word , as opposed to , refers to the western half of the ancient capital of Heiankyō – the palace faced south, hence west was to the right...
, as the location of Saga's mausoleum
Mausoleum
A mausoleum is an external free-standing building constructed as a monument enclosing the interment space or burial chamber of a deceased person or persons. A monument without the interment is a cenotaph. A mausoleum may be considered a type of tomb or the tomb may be considered to be within the...
.

Soon after his enthronement, Saga himself took ill. Emperor Saga's untimely health problems provided former-Emperor Heizei with a unique opportunity to foment a rebellion; however, forces loyal to Emperor Saga, led by taishōgun Sakanoue no Tamuramaro
Sakanoue no Tamuramaro
was a general and shogun of the early Heian Period of Japan. He was the son of Sakanoue no Karitamaro.-Military career:Serving Emperor Kammu, he was appointed shogun and given the task of conquering the Emishi , a people native to the north of Honshū, which he subjugated...
, quickly defeated the Heizei rebels which thus limited the adverse consequences which would have followed any broader conflict. This same Tamuramaro is remembered in Aomori
Aomori Prefecture
is a prefecture of Japan located in the Tōhoku Region. The capital is the city of Aomori.- History :Until the Meiji Restoration, the area of Aomori prefecture was known as Mutsu Province....
's annual nebuta or neputa matsuri which feature a number of gigantic, specially-constructed, illuminated paper floats. These great lantern-structures are colorfully painted with mythical figures; and teams of men carry them through the streets as crowds shout encouragement. This early ninth century military leader is commemorated in this way because he is said to have ordered huge illuminated lanterns to be placed at the top of hills; and when the curious Emishi
Emishi
The constituted a group of people who lived in northeastern Honshū in the Tōhoku region. They are referred to as in contemporary sources. Some Emishi tribes resisted the rule of the Japanese Emperors during the late Nara and early Heian periods...
approached these bright lights to investigate, they were captured and subdued by Tamuramaro's men.

The years of Saga's reign are more specifically identified by more than one era name (nengō).

In ancient Japan, there were four noble clans, the Gempeitōkitsu (源平藤橘). One of these clans, the Minamoto clan
Minamoto clan
was one of the surnames bestowed by the Emperors of Japan upon members of the imperial family who were demoted into the ranks of the nobility. The practice was most prevalent during the Heian Period , although its last occurrence was during the Sengoku Era. The Taira were another such offshoot of...
are also known as Genji (源氏), and of these, the Saga Genji (嵯峨源氏) are descended from 52nd emperor Saga. Saga's grandson, Minamoto no Tōru
Minamoto no Toru
was a Japanese poet and statesman. He was born the grandson of Emperor Saga and a member of the Saga Genji clan. He is sometimes mentioned as the model for Hikaru Genji in important Japanese literary classic the Tale of Genji....
, is thought to be an inspiration for the protagonist of the novel The Tale of Genji
The Tale of Genji
is a classic work of Japanese literature attributed to the Japanese noblewoman Murasaki Shikibu in the early 11th century, around the peak of the Heian period. It is sometimes called the world's first novel, the first modern novel, the first psychological novel or the first novel still to be...
.

Emperor Saga played an important role as a stalwart supporter of the Buddhist
Buddhism
Buddhism is a religion and philosophy encompassing a variety of traditions, beliefs and practices, largely based on teachings attributed to Siddhartha Gautama, commonly known as the Buddha . The Buddha lived and taught in the northeastern Indian subcontinent some time between the 6th and 4th...
monk Kūkai
Kukai
Kūkai , also known posthumously as , 774–835, was a Japanese monk, civil servant, scholar, poet, and artist, founder of the Shingon or "True Word" school of Buddhism. Shingon followers usually refer to him by the honorific titles of and ....
. The emperor helped Kūkai to establish the Shingon School of Buddhism by granting him the Toji
Toji
Tōji can refer to:* Tō-ji, a temple in Kyoto, Japan.* Dongzhi in pīnyīn is the 22nd solar term in the traditional East Asian calendar.* The job title of a Japanese sake brewer - Sake#Tōji....
temple in the capital Heian-kyō
Heian-kyo
Heian-kyō , was one of several former names for the city now known as Kyoto. It was the capital of Japan for over one thousand years, from 794 to 1868 with an interruption in 1180....
(present day Kyoto
Kyoto
is a city in the central part of the island of Honshū, Japan. It has a population close to 1.5 million. Formerly the imperial capital of Japan, it is now the capital of Kyoto Prefecture, as well as a major part of the Osaka-Kobe-Kyoto metropolitan area.-History:...
).

is a collective term for the very few most powerful men attached to the court of the Emperor of Japan
Emperor of Japan
The Emperor of Japan is, according to the 1947 Constitution of Japan, "the symbol of the state and of the unity of the people." He is a ceremonial figurehead under a form of constitutional monarchy and is head of the Japanese Imperial Family with functions as head of state. He is also the highest...
in pre-Meiji
Meiji period
The , also known as the Meiji era, is a Japanese era which extended from September 1868 through July 1912. This period represents the first half of the Empire of Japan.- Meiji Restoration and the emperor :...
eras.

In general, this elite group included only three to four men at a time. These were hereditary courtiers whose experience and background would have brought them to the pinnacle of a life's career. During Saga's reign (809-823), this kugyō included:

Saga had 49 children by at least 30 different women. Many of the children received the surname Minamoto, thereby removing them from royal succession.

Hi(deposed): Princess Takatsu (高津内親王) (?-841), daughter of Emperor Kammu
Emperor Kammu
was the 50th emperor of Japan, according to the traditional order of succession. Kammu reigned from 781 to 806.-Traditional narrative:Kammu's personal name was . He was the eldest son of Prince Shirakabe , and was born prior to Shirakabe's ascension to the throne...

Court lady: A daughter of Hiroi no Otona (広井弟名の娘)