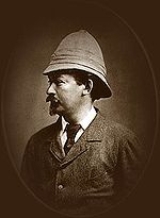 Encyclopedia
Emil Holub was a Czech physician, explorer, cartographer, and ethnographer in Africa
Africa
Africa is the world's second largest and second most populous continent, after Asia. At about 30.2 million km² including adjacent islands, it covers 6% of the Earth's total surface area and 20.4% of the total land area...
. In a 2005 poll, he was voted #90 of the 100 greatest Czechs
Nejvetší Cech
Největší Čech is the Czech spin-off of the BBC Greatest Britons show; a television poll of the populace to name the greatest Czech in history. The series was broadcast by the national public-service broadcaster, Česká televize...
.

Holub was born in Holice
Holice (Pardubice District)
Holice, Holice v Čechách is a town in Pardubice Region of the Czech Republic.- History :Holice was first mentioned in 1336. It obtained the town status in the 15th century.- Holice microregion :...
in eastern Bohemia
Bohemia
Bohemia is a historical region in central Europe, occupying the western two-thirds of the traditional Czech Lands. It is located in the contemporary Czech Republic with its capital in Prague...
(then within the Austrian Empire
Austrian Empire
The Austrian Empire was a modern era successor empire, which was centered on what is today's Austria and which officially lasted from 1804 to 1867. It was followed by the Empire of Austria-Hungary, whose proclamation was a diplomatic move that elevated Hungary's status within the Austrian Empire...
, now the Czech Republic
Czech Republic
The Czech Republic is a landlocked country in Central Europe. The country is bordered by Poland to the northeast, Slovakia to the east, Austria to the south, and Germany to the west and northwest....
) in the family of municipal doctor. After studying at German-language grammar school in Žatec
Žatec
Žatec is an old town in the Czech Republic, in Louny District, Ústí nad Labem Region. It has a population of 19,813 .The earliest historical reference to Sacz is in the Latin chronicle of Thietmar of Merseburg of 1004. During the 11th century it belonged to the Vršovci - a powerful Czech...
(Saaz), he was admitted at Prague University where he obtained a degree as a doctor of medicine
Medicine
Medicine is the science and art of healing. It encompasses a variety of health care practices evolved to maintain and restore health by the prevention and treatment of illness....
(1872).

Inspired to visit Africa by the diaries of David Livingstone
David Livingstone
David Livingstone was a Scottish Congregationalist pioneer medical missionary with the London Missionary Society and an explorer in Africa. His meeting with H. M. Stanley gave rise to the popular quotation, "Dr...
, Holub travelled to Cape Town
Cape Town
Cape Town is the second-most populous city in South Africa, and the provincial capital and primate city of the Western Cape. As the seat of the National Parliament, it is also the legislative capital of the country. It forms part of the City of Cape Town metropolitan municipality...
, South Africa
South Africa
The Republic of South Africa is a country in southern Africa. Located at the southern tip of Africa, it is divided into nine provinces, with of coastline on the Atlantic and Indian oceans...
shortly after graduation and eventually settled near Kimberley to practise medicine. After eight months, Holub set out in a convoy of local hunters on a two-month experimental expedition, or "scientific safari", where he began to assemble a large natural history collection.

In 1873 Holub set out on his second scientific safari, devoting his attention to the collection of ethnographic material. On his third expedition in 1875, he ventured all the way to the Zambezi
Zambezi
The Zambezi is the fourth-longest river in Africa, and the largest flowing into the Indian Ocean from Africa. The area of its basin is , slightly less than half that of the Nile...
river and made the first detailed map of the region surrounding Victoria Falls
Victoria Falls
The Victoria Falls or Mosi-oa-Tunya is a waterfall located in southern Africa on the Zambezi River between the countries of Zambia and Zimbabwe.-Introduction:...
. Holub also wrote and published the first book account of the Victoria Falls published in English in Grahamstown
Grahamstown
Grahamstown is a city in the Eastern Cape Province of the Republic of South Africa and is the seat of the Makana municipality. The population of greater Grahamstown, as of 2003, was 124,758. The population of the surrounding areas, including the actual city was 41,799 of which 77.4% were black,...
in 1879.

After returning to Prague for several years, Holub made plans for a bold African expedition. In 1883, Holub, along with his new wife and six guides, set out to do what no one had done before: explore the entire length of Africa from Cape Town all the way to Egypt
Egypt
Egypt , officially the Arab Republic of Egypt, Arabic: , is a country mainly in North Africa, with the Sinai Peninsula forming a land bridge in Southwest Asia. Egypt is thus a transcontinental country, and a major power in Africa, the Mediterranean Basin, the Middle East and the Muslim world...
. However, the expedition was troubled by illness and the uncooperative Ila tribesmen and Holub's team was forced to turn back in 1886.

Holub mounted two highly successful exhibitions, in 1891 in Vienna and in 1892 in Prague. Frustrated that he was unable to find a permanent home for his large collection of artefacts, he gradually sold or gave away parts of it to museums, scientific institutions and schools.

Later Holub published a series of documents, contributing to papers and magazines, and delivering lectures. His early death came in Vienna
Vienna
Vienna is the capital and largest city of the Republic of Austria and one of the nine states of Austria. Vienna is Austria's primary city, with a population of about 1.723 million , and is by far the largest city in Austria, as well as its cultural, economic, and political centre...
on February 21, 1902, from lingering complications of malaria
Malaria
Malaria is a mosquito-borne infectious disease of humans and other animals caused by eukaryotic protists of the genus Plasmodium. The disease results from the multiplication of Plasmodium parasites within red blood cells, causing symptoms that typically include fever and headache, in severe cases...
and other diseases he had acquired while in Africa.

In 1952, the movie Velké dobrodružství (Great Adventure) was filmed about Holub's expeditions.