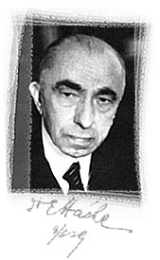 Emil Hácha was born on 12 July 1872 in the South Bohemian
South Bohemian Region
South Bohemian Region is an administrative unit of the Czech Republic, located mostly in the southern part of its historical land of Bohemia, with a small part in southwestern Moravia...
town of Trhové Sviny
Trhové Sviny
Trhové Sviny is a town in the South Bohemian Region of the Czech Republic. It has cca 4,700 inhabitants.-External links:* http://www.tsviny.cz/tsviny/obrazem.htm...
. He graduated from a secondary school in České Budějovice
Ceské Budejovice
České Budějovice is a city in the Czech Republic. It is the largest city in the South Bohemian Region and is the political and commercial capital of the region and centre of the Roman Catholic Diocese of České Budějovice and of the University of South Bohemia and the Academy of Sciences...
and then applied for the law faculty at the University of Prague
Charles University in Prague
Charles University in Prague is the oldest and largest university in the Czech Republic. Founded in 1348, it was the first university in Central Europe and is also considered the earliest German university...
. After finishing his studies in 1896 (JUDr.) he worked for the Country Committee of the Kingdom of Bohemia
Bohemia
Bohemia is a historical region in central Europe, occupying the western two-thirds of the traditional Czech Lands. It is located in the contemporary Czech Republic with its capital in Prague...
in Prague
Prague
Prague is the capital and largest city of the Czech Republic. Situated in the north-west of the country on the Vltava river, the city is home to about 1.3 million people, while its metropolitan area is estimated to have a population of over 2.3 million...
(a self-government body with quite limited power). Shortly after the outbreak of the World War I
World War I
World War I , which was predominantly called the World War or the Great War from its occurrence until 1939, and the First World War or World War I thereafter, was a major war centred in Europe that began on 28 July 1914 and lasted until 11 November 1918...
, he became a judge at the Supreme Administrative Court in Vienna
Vienna
Vienna is the capital and largest city of the Republic of Austria and one of the nine states of Austria. Vienna is Austria's primary city, with a population of about 1.723 million , and is by far the largest city in Austria, as well as its cultural, economic, and political centre...
(the court was responsible for Cisleithania
Cisleithania
Cisleithania was a name of the Austrian part of Austria-Hungary, the Dual Monarchy created in 1867 and dissolved in 1918. The name was used by politicians and bureaucrats, but it had no official status...
). He met Ferdinand Pantůček there.

After the Treaty of Versailles
Treaty of Versailles
The Treaty of Versailles was one of the peace treaties at the end of World War I. It ended the state of war between Germany and the Allied Powers. It was signed on 28 June 1919, exactly five years after the assassination of Archduke Franz Ferdinand. The other Central Powers on the German side of...
, Pantůček became President of the Supreme Administrative Court of the Republic of Czechoslovakia in Prague, and Hácha became a judge (1918) and Deputy President (1919) of the court. After Pantůček's death in 1925 he was chosen by T. G. Masaryk
Tomáš Masaryk
Tomáš Garrigue Masaryk , sometimes called Thomas Masaryk in English, was an Austro-Hungarian and Czechoslovak politician, sociologist and philosopher, who as an eager advocate of Czechoslovak independence during World War I became the founder and first President of Czechoslovakia, also was...
as his successor. He became one of the most notable lawyers in Czechoslovakia, a specialist in the English common law
Common law
Common law is law developed by judges through decisions of courts and similar tribunals rather than through legislative statutes or executive branch action...
and international law
International law
Public international law concerns the structure and conduct of sovereign states; analogous entities, such as the Holy See; and intergovernmental organizations. To a lesser degree, international law also may affect multinational corporations and individuals, an impact increasingly evolving beyond...
. He was also a translator of English literature (most notably the Three Men in a Boat
Three Men in a Boat
Three Men in a Boat ,The Penguin edition punctuates the title differently: Three Men in a Boat: To Say Nothing of the Dog! published in 1889, is a humorous account by Jerome K...
by Jerome K. Jerome
Jerome K. Jerome
Jerome Klapka Jerome was an English writer and humorist, best known for the humorous travelogue Three Men in a Boat.Jerome was born in Caldmore, Walsall, England, and was brought up in poverty in London...
), collector of art and a poet (his book Omyly a přeludy was published in 1939 anonymously, and again, this time under his name, in 2001 ). He also became a member of the Legislative Council.

After the Treaty of Munich and emigration of president Edvard Beneš
Edvard Beneš
Edvard Beneš was a leader of the Czechoslovak independence movement, Minister of Foreign Affairs and the second President of Czechoslovakia. He was known to be a skilled diplomat.- Youth :...
he was chosen as his successor on 30 November 1938. He was chosen because of his Catholicism and conservatism and because of not being involved in any government that led to the partition of the country.

In the evening of 14 March 1939, Hitler invited President Hácha to the Reich Chancellery in Berlin
Berlin
Berlin is the capital city of Germany and is one of the 16 states of Germany. With a population of 3.45 million people, Berlin is Germany's largest city. It is the second most populous city proper and the seventh most populous urban area in the European Union...
. Hitler deliberately kept him waiting for hours, an ordeal he referred to as "Háchaizing". Finally, at 1:30 am on 15 March 1939, Hitler saw the President. He told Hácha that as they were speaking, the German army was about to invade Czechoslovakia. All of Czechoslovakia's defences were now under German control following the Munich Agreement
Munich Agreement
The Munich Pact was an agreement permitting the Nazi German annexation of Czechoslovakia's Sudetenland. The Sudetenland were areas along Czech borders, mainly inhabited by ethnic Germans. The agreement was negotiated at a conference held in Munich, Germany, among the major powers of Europe without...
in September of the previous year. The country was virtually surrounded by Germany on three fronts. Hitler now gave the President two options: to cooperate with Germany, in which case the "entry of German troops would take place in a tolerable manner" and "permit Czechoslovakia a generous life of her own, autonomy and a degree of national freedom..." or face a scenario in which "...resistance would be broken by force of arms, using all means". By four o'clock, and after suffering a heart attack induced by Göring's threat to bomb the capital, Hácha contacted Prague, effectively "signing Czechoslovakia away" to Germany. French Ambassador Robert Coulondre reported that by half past four, Hácha was "in a state of total collapse, and kept going only by means of injections".

After the occupation of the remnants of Czechoslovakia
Czechoslovakia
Czechoslovakia or Czecho-Slovakia was a sovereign state in Central Europe which existed from October 1918, when it declared its independence from the Austro-Hungarian Empire, until 1992...
on 16 March, he retained his office as President but was forced to swear an oath to Hitler and Konstantin von Neurath
Konstantin von Neurath
Konstantin Freiherr von Neurath was a German diplomat remembered mostly for having served as Foreign minister of Germany between 1932 and 1938...
, the newly-chosen Protector of Bohemia and Moravia
Protectorate of Bohemia and Moravia
The Protectorate of Bohemia and Moravia was the majority ethnic-Czech protectorate which Nazi Germany established in the central parts of Bohemia, Moravia and Czech Silesia in what is today the Czech Republic...
, in November 1939. He protested against the German policies and Germanization of former Czechoslovakia; however, that was to little effect. He also secretly cooperated with the exiled government of Edvard Beneš
Edvard Beneš
Edvard Beneš was a leader of the Czechoslovak independence movement, Minister of Foreign Affairs and the second President of Czechoslovakia. He was known to be a skilled diplomat.- Youth :...
.

His situation changed after Reinhard Heydrich
Reinhard Heydrich
Reinhard Tristan Eugen Heydrich , also known as The Hangman, was a high-ranking German Nazi official.He was SS-Obergruppenführer and General der Polizei, chief of the Reich Main Security Office and Stellvertretender Reichsprotektor of Bohemia and Moravia...
was appointed Deputy Protector of Bohemia and Moravia, as Neurath was considered not harsh enough by Hitler. Hácha lost any influence over the matters in his country and became a puppet. Many of his colleagues and friends were arrested (including the Prime Minister Alois Eliáš
Alois Eliáš
Alois Eliáš was a Czechoslovak general and politician. He served as Prime Minister of the Protectorate of Bohemia and Moravia from April 27, 1939 to September 28, 1941.- Career in 1939-1942 :...
) and shot or sent to concentration camps. Because of the terror campaign started by Heydrich, Hácha felt that collaboration with the occupants was the only way he could help his people and nation.

According to postwar historians, because of Hácha's poor health, he was not responsible for his actions, given his old age and failing mental faculties. In any case, his influence on German policies was close to none after 1941 and almost certainly earlier. On 9 May 1945, Prague was liberated by the Red Army
Red Army
The Workers' and Peasants' Red Army started out as the Soviet Union's revolutionary communist combat groups during the Russian Civil War of 1918-1922. It grew into the national army of the Soviet Union. By the 1930s the Red Army was among the largest armies in history.The "Red Army" name refers to...
during the Prague Offensive
Prague Offensive
The Prague Offensive was the last major Soviet operation of World War II in Europe. The offensive, and the battle for Prague, was fought on the Eastern Front from 6 May to 11 May 1945. This battle for the city is particularly noteworthy in that it ended after the Third Reich capitulated on 8 May...
. Emil Hácha was arrested on 14 May and transferred immediately to a prison hospital
Pankrác Prison
Pankrác Prison, officially Prague Pankrác Remand Prison , is a prison in Prague, Czech Republic...
. He died there on 27 June under mysterious circumstances, with many historians entertaining the possibility of assassination
Assassination
To carry out an assassination is "to murder by a sudden and/or secret attack, often for political reasons." Alternatively, assassination may be defined as "the act of deliberately killing someone, especially a public figure, usually for hire or for political reasons."An assassination may be...
, a suspicion shared by the Hácha family. After his death, he was buried at first in an unmarked grave at the Vinohrady
Vinohrady
Vinohrady is a cadastral district in Prague. It is so named because the area was once covered in vineyards dating from the 14th century...
cemetery, but now there is a marker over his body. 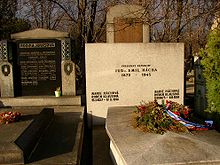 He is regarded by many as one of the most tragic characters in all of Czech history. By others he is seen as one of the most disappointing. He collaborated with Hitler's Nazi
Nazism
Nazism, the common short form name of National Socialism was the ideology and practice of the Nazi Party and of Nazi Germany...
regime and became the State President in 1939, when Czechoslovakia was overtaken by Germany and transformed into the Protectorate of Bohemia and Moravia and the Slovak Republic. Historians have judged him as a man who tried to save as much of Czechoslovakia's freedom as was possible given the limited options open to him and his own failing health.

Dramatic account by French diplomats of Emil Hácha's reluctance to sign over Bohemia and Moravia to Germany Hácha's report on the 15 March meeting in Berlin The complex legacy of the president many would prefer to forget
The source of this article is wikipedia, the free encyclopedia.  The text of this article is licensed under the GFDL.