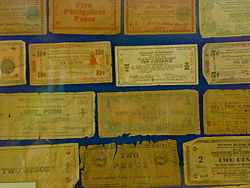 Emergency circulating notes were currency printed by the Philippine Commonwealth Government in exile
Government in exile
A government in exile is a political group that claims to be a country's legitimate government, but for various reasons is unable to exercise its legal power, and instead resides in a foreign country. Governments in exile usually operate under the assumption that they will one day return to their...
during World War II
World War II
World War II, or the Second World War , was a global conflict lasting from 1939 to 1945, involving most of the world's nations—including all of the great powers—eventually forming two opposing military alliances: the Allies and the Axis...
. These "guerrilla pesos" were printed by local government units and banks using crude inks and materials. Due to the inferior quality of these bills, they were easily mutilated.

Apayao was one of the sub-provinces which comprised the Mountain Province
Mountain Province
Mountain Province is a landlocked province of the Philippines in the Cordillera Administrative Region in Luzon. Its capital is Bontoc and borders, clockwise from the south, Ifugao, Benguet, Ilocos Sur, Abra, Kalinga, and Isabela.Mountain Province is sometimes incorrectly named Mountain in some...
during World War II. In the remote sub-province of Apayao, Deputy Governor Milton Ayochok assumed, the authority granted by Philippine President Manuel L. Quezon
Manuel L. Quezon
Manuel Luis Quezón y Molina served as president of the Commonwealth of the Philippines from 1935 to 1944. He was the first Filipino to head a government of the Philippines...
to print emergency currency. On September 11, 1942, the Apayao Provincial Board authorized the printing of currency to provide for the budget for fiscal year 1942-1943. A Currency Committee was formed composed of Deputy Governor Ayochok as Chairman, with Deputy Treasurer M. Medina and Deputy Auditor F.A. Enciso as members.

The First Issue was printed from hand-engraved plates. Records state that a total of PHP
Philippine peso
The peso is the currency of the Philippines. It is subdivided into 100 centavos . Before 1967, the language used on the banknotes and coins was English and so "peso" was the name used...
105,495 was issued. Printing probably took place at Kabugao
Kabugao, Apayao
Kabugao is a municipality in the province of Apayao, Philippines. It is the capital municipality of Apayao. According to the latest census, it has a population of 14,529 people in 2,501 households.-Barangays:...
, its provincial capital in conjunction with the printing of the Cagayan
Cagayan
Cagayan , the "Land of Smiling Beauty", is a province of the Philippines in the Cagayan Valley region in Luzon. Its capital is Tuguegarao City and is located at the northeastern corner of the island of Luzon. Cagayan also includes the Babuyan Islands to the north. The province borders Ilocos Norte...
fourth issue.

The Second Issue was produced by mimeograph. Official records of this issue were captured by the Japan
Japan
Japan is an island nation in East Asia. Located in the Pacific Ocean, it lies to the east of the Sea of Japan, China, North Korea, South Korea and Russia, stretching from the Sea of Okhotsk in the north to the East China Sea and Taiwan in the south...
ese. Known serial numbers would indicate that this issue equaled or possibly exceeded the previous issue and was probably intended for the fiscal year 1943-1944 budget.

On May 22, 1942, Japanese occupation forces established garrisons at Tagbilaran, the capital and Guindulman
Guindulman, Bohol
Guindulman is a 3rd class municipality in the province of Bohol, Philippines. According to the 2007 census, it has a population of 32,355 people.-Etymology:...
where they operated manganese mines. On January 9, 1943, resistance officers and provincial officials who had not surrendered established a "free" government with Conrado D. Marapao as Governor. Eventually its jurisdiction was established over 34 of the 35 municipalities. Just prior to the surrender, President Quezon had authorized Bohol to issue PHP 150,000 in emergency currency. This authority was the basis for printing currency to finance the free government and the resistance force. The Currency Board consisted of Provincial Auditor Dalmatio Ramos as Chairman, with Provincial Fiscal Jose C. Borromeo and Acting Provincial Treasurer Doreteo Toledo as members. In June 1943, radio contact was established with President Quezon who authorized an additional PHP 200,000. In September, President Quezon authorized an additional One Million Pesos. The printing took place at the Municipality of Carmen
Carmen, Bohol
Carmen is a 2nd class municipality located in the heart of the province of Bohol, Philippines. It is composed of 29 barangays with an area of 23,245 sq. kilometers. It was founded in the year 1869. According to the 2007 census, it has a population of 43,153 people.The Chocolate Hills is the main...
. Notes were printed in black on manila paper
Manila paper
Manila paper is a type of paper originally made from Manila hemp or abacá. It is buff in color and the fibers are usually visible to the naked eye. Because manila paper is generally inexpensive, it is commonly given to children for making child art....
of varying thickness, except for a few hundred notes on white paper
White paper
A white paper is an authoritative report or guide that helps solve a problem. White papers are used to educate readers and help people make decisions, and are often requested and used in politics, policy, business, and technical fields. In commercial use, the term has also come to refer to...
. Serial numbers were applied in two different styles of type.