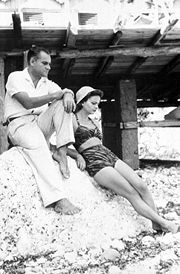 Elsa Morante was an Italian
Italy
Italy , officially the Italian Republic languages]] under the European Charter for Regional or Minority Languages. In each of these, Italy's official name is as follows:;;;;;;;;), is a unitary parliamentary republic in South-Central Europe. To the north it borders France, Switzerland, Austria and...
novelist, perhaps best known for her novel
Novel
A novel is a book of long narrative in literary prose. The genre has historical roots both in the fields of the medieval and early modern romance and in the tradition of the novella. The latter supplied the present generic term in the late 18th century....
La storia (History).

Elsa Morante was born in Rome
Rome
Rome is the capital of Italy and the country's largest and most populated city and comune, with over 2.7 million residents in . The city is located in the central-western portion of the Italian Peninsula, on the Tiber River within the Lazio region of Italy.Rome's history spans two and a half...
in 1912, and except for a period during World War II, would reside in her home city until her death in 1985.

Morante began writing short stories
Short story
A short story is a work of fiction that is usually written in prose, often in narrative format. This format tends to be more pointed than longer works of fiction, such as novellas and novels. Short story definitions based on length differ somewhat, even among professional writers, in part because...
which appeared in various publications and periodicals, including periodicals for children, in the 1930s. Her first book was a collection of some of the stories, Il Gioco Segreto, published in 1941. It was followed in 1942 by a children's book, La Bellissime avventure di Caterì dalla Trecciolina (rewritten in 1959 as Le straordinarie avventure di Caterina).

Towards the end of World War II
World War II
World War II, or the Second World War , was a global conflict lasting from 1939 to 1945, involving most of the world's nations—including all of the great powers—eventually forming two opposing military alliances: the Allies and the Axis...
, Morante with her husband, novelist and film critic Alberto Moravia, fearful because both were half Jewish, fled to the area around the Ciociara region near Rome, a flight that inspired Morante's "La storia" and Moravia's "La Ciociara" (translated into English as "Two Women
Two Women
Two Women is a 1960 Italian film directed by Vittorio De Sica. It tells the story of a woman trying to protect her young daughter from the horrors of war. The film stars Sophia Loren, Jean-Paul Belmondo, Eleonora Brown, Carlo Ninchi and Andrea Checchi...
" and later made into a film with Sofia Loren). Southern Italy is the backdrop for much of her work. She began translating
Translation
Translation is the communication of the meaning of a source-language text by means of an equivalent target-language text. Whereas interpreting undoubtedly antedates writing, translation began only after the appearance of written literature; there exist partial translations of the Sumerian Epic of...
Katherine Mansfield
Katherine Mansfield
Kathleen Mansfield Beauchamp Murry was a prominent modernist writer of short fiction who was born and brought up in colonial New Zealand and wrote under the pen name of Katherine Mansfield. Mansfield left for Great Britain in 1908 where she encountered Modernist writers such as D.H. Lawrence and...
during this period, as well as working on her first novel—she even risked returning to wartorn Rome to retrieve the manuscript of "Menzogna e sortilegio" and obtain winter clothes.

Following the war, Morante and Moravia met American
United States
The United States of America is a federal constitutional republic comprising fifty states and a federal district...
translator William Weaver
William Weaver
William Fense Weaver is an English language translator of modern Italian literature.-Biography:William Weaver is perhaps best known for his translations of the work of Umberto Eco and Italo Calvino, and has translated many other Italian authors over the course of a career spanning more than fifty...
, who helped them to find an American audience. Her first novel, 1948's Menzogna e sortilegio, won the prestigious Viareggio Prize
Viareggio Prize
The Viareggio Literary Prize is a prestigious Italian literary award, whose first edition was in 1930, and is named after the Tuscan city of Viareggio...
, and was later published in the United States as House of Liars in 1951. However, Morante and others found the English translation quite poorly done, to Morante's great disappointment.

Morante's next novel, L'isola di Arturo
L'isola di Arturo
Arturo's Island is a novel by Italian author Elsa Morante. Published in 1957, it won the Premio Strega.-Plot synopsis:In the novel, Arturo, a small boy, grows up on the island of Procida in the Bay of Naples. The island is the location of a penitentiary. Arturo lives in a gloomy mansion bequeathed...
, appeared in 1957 and won the Strega Prize
Strega Prize
The Strega Prize is the most prestigious Italian literary award. It has been awarded annually since 1947 for the best work of prose fiction by an Italian author and first published between 1 May of the previous year and 30 April...
. Much of the work she had written in the meantime, she had destroyed, although she did publish a novella
Novella
A novella is a written, fictional, prose narrative usually longer than a novelette but shorter than a novel. The Science Fiction and Fantasy Writers of America Nebula Awards for science fiction define the novella as having a word count between 17,500 and 40,000...
, The Andalusian Shawl, and a poem, The Adventure. Her next work, Il mondo salvato dai ragazzini (The World Saved by Children), a mix of poetry, songs and a play, many addressed to her lover Bill Morrow, an American, did not appear until 1968. Freudian psychology, Plato, Pier Paolo Pasolini
Pier Paolo Pasolini
Pier Paolo Pasolini was an Italian film director, poet, writer, and intellectual. Pasolini distinguished himself as a poet, journalist, philosopher, linguist, novelist, playwright, filmmaker, newspaper and magazine columnist, actor, painter and political figure...
, and Simone Weil
Simone Weil
Simone Weil , was a French philosopher, Christian mystic, and social activist.-Biography:Weil was born in Paris to Alsatian agnostic Jewish parents who fled the annexation of Alsace-Lorraine to Germany. She grew up in comfortable circumstances, and her father was a doctor. Her only sibling was...
have all been cited as influences on her writing.

Morante and Moravia separated in 1961, and Morante continued to write sporadically. La storia (History), a story about Rome
Rome
Rome is the capital of Italy and the country's largest and most populated city and comune, with over 2.7 million residents in . The city is located in the central-western portion of the Italian Peninsula, on the Tiber River within the Lazio region of Italy.Rome's history spans two and a half...
during World War II, appeared in 1974, which although a bestseller in Italy for the publishing house Einaudi
Einaudi
Einaudi may refer to;*Giulio Einaudi , an Italian publisher**Giulio Einaudi editore, now an imprint of Arnoldo Mondadori Editore*Luigi Einaudi , an Italian politician*His son Mario Einaudi , an Italian political scientist...
, issued in an economical paperback edition at Morante's request, provoked a furious and at times negative reaction from literary critics on the left, who disliked its anti-ideological polemic. After her friend Pasolini wrote a negative review of the book, she broke off their friendship.

Her final novel, 1982's Aracoeli, has been seen as a summation, albeit by some critics a pessimistic one, of motifs and trends present in all of her writing, such as the importance of children and childhood, and private worlds in which fantasy provides an escape from dreary external realities.

The first English language biography of Morante, A Woman of Rome, by the American writer Lily Tuck
Lily Tuck
Lily Tuck is an American novelist and short story writer whose novel The News from Paraguay won the 2004 National Book Award. Her novel Siam was nominated for the 2000 PEN/Faulkner Award for Fiction...
, was published in 2008.