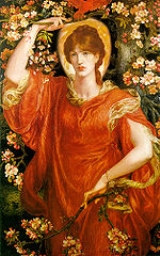 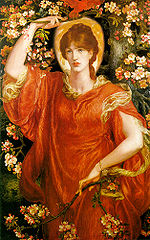 Elegia di Madonna Fiammetta, or The Elegy of Lady Fiammetta in English, is a novel
Novel
A novel is a book of long narrative in literary prose. The genre has historical roots both in the fields of the medieval and early modern romance and in the tradition of the novella. The latter supplied the present generic term in the late 18th century....
by the Italian
Italy
Italy , officially the Italian Republic languages]] under the European Charter for Regional or Minority Languages. In each of these, Italy's official name is as follows:;;;;;;;;), is a unitary parliamentary republic in South-Central Europe. To the north it borders France, Switzerland, Austria and...
writer Giovanni Boccaccio
Giovanni Boccaccio
Giovanni Boccaccio was an Italian author and poet, a friend, student, and correspondent of Petrarch, an important Renaissance humanist and the author of a number of notable works including the Decameron, On Famous Women, and his poetry in the Italian vernacular...
, probably written between 1343 and 1344. Written in the form of a first person confessional monologue, it describes the protagonist, Fiammetta
Fiammetta
Fiammetta, Fiametta — pseudonym of Giovanni Boccaccio's beloved and muse, her real name may have been Maria d’Aquino.-Boccaccio's works with her name:* The Filocolo* Teseida* Il Filostrato* Ninfale d'Ameto...
's, passion for Panfilo, a Florentine merchant, and takes place in Naples. It has been characterised as the first psychological novel
Psychological novel
A psychological novel, also called psychological realism, is a work of prose fiction which places more than the usual amount of emphasis on interior characterization, and on the motives, circumstances, and internal action which springs from, and develops, external action...
in Western literature. It consists of a prologue and nine chapters.

Lady Fiammetta recounts her tragic love affair with Panfilo, offering it as a warning to other women. Lady Fiammetta and Panfilo quickly fall in love and have an affair, only to have it end when Panfilo returns to Florence.

Although he promises to return to Naples, she eventually realizes that he has another lover in Florence. The narrative revolves around Fiammetta's jealousy and despair caused by the affair, rather than the development of her relationship with Panfilo. She eventually considers suicide, but her nurse stops her. Her hopes in the end are bolstered by the news that Panfilo may be coming back to Naples after all.

Two new translations of Boccaccio's Elegia have come out in recent years. The two translations differ in their principles of translation and their Italian texts.
One by Roberta L. Payne and Alexandra Hennessey Olsenhope is titled "The Elegy of Madonna Fiammetta Sent by Her to Women in Love" is aimed at a popular audience.
The Mariangela Causa-Steindler and Thomas Mauch translation "The Elegy of Lady Fiammetta" (University of Chicago Press, 1990) is more scholarly.

http://www.gutenberg.org/files/10006/10006-h/10006-h.htm: english translation: "LA FIAMMETTA
BY GIOVANNI BOCCACCIO TRANSLATED BY JAMES C. BROGAN, 1907.
The source of this article is wikipedia, the free encyclopedia.  The text of this article is licensed under the GFDL.