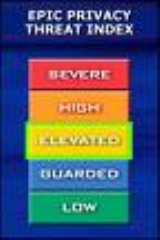 Encyclopedia
Electronic Privacy Information Center (EPIC) is a public interest research group in Washington, D.C.
Washington, D.C.
Washington, D.C., formally the District of Columbia and commonly referred to as Washington, "the District", or simply D.C., is the capital of the United States. On July 16, 1790, the United States Congress approved the creation of a permanent national capital as permitted by the U.S. Constitution....
It was established in 1994 to focus public attention on emerging civil liberties
Civil liberties
Civil liberties are rights and freedoms that provide an individual specific rights such as the freedom from slavery and forced labour, freedom from torture and death, the right to liberty and security, right to a fair trial, the right to defend one's self, the right to own and bear arms, the right...
issues and to protect privacy
Privacy
Privacy is the ability of an individual or group to seclude themselves or information about themselves and thereby reveal themselves selectively...
, the First Amendment
First Amendment to the United States Constitution
The First Amendment to the United States Constitution is part of the Bill of Rights. The amendment prohibits the making of any law respecting an establishment of religion, impeding the free exercise of religion, abridging the freedom of speech, infringing on the freedom of the press, interfering...
, and constitutional values in the information age. EPIC pursues a wide range of activities, including privacy research, public education, conferences, litigation, publications, and advocacy.

EPIC maintains web sites (epic.org and privacy.org) and publishes the online EPIC Alert every two weeks with information about emerging privacy and civil liberties issues. EPIC also publishes Privacy and Human Rights, Litigation Under the Federal Open Government Laws, The Public Voice WSIS Sourcebook, The Privacy Law Sourcebook, and The Consumer Law Sourcebook. EPIC litigates high-profile privacy, First Amendment
First Amendment to the United States Constitution
The First Amendment to the United States Constitution is part of the Bill of Rights. The amendment prohibits the making of any law respecting an establishment of religion, impeding the free exercise of religion, abridging the freedom of speech, infringing on the freedom of the press, interfering...
, and Freedom of Information Act cases. EPIC advocates for strong privacy safeguards.

EPIC was founded in 1994 by David Banisar, Marc Rotenberg
Marc Rotenberg
Marc Rotenberg is President and Executive Director of the Electronic Privacy Information Center in Washington, DC. He teaches Information Privacy Law at Georgetown University Law Center, and testifies frequently before Congress on emerging privacy and civil liberties issues, such as access to...
, and David Sobel
David Sobel
David Sobel is an education writer who has helped in developing the philosophy of place-based education. He has written extensively on the topic in books and numerous articles. He is currently a Core Faculty member and Director of Certificate Programs at Antioch University New England.-...
, as a joint project of the Fund for Constitutional Government and Computer Professionals for Social Responsibility
Computer Professionals for Social Responsibility
Computer Professionals for Social Responsibility is a global organization promoting the responsible use of computer technology. in 1983 . It educates policymakers and the public on a wide range of issues...
. Early on, the organization focused on government surveillance and cryptography issues, such as the Clipper Chip
Clipper chip
The Clipper chip was a chipset that was developed and promoted by the U.S. National Security Agency as an encryption device to be adopted by telecommunications companies for voice transmission...
and the Communications Assistance for Law Enforcement Act
Communications Assistance for Law Enforcement Act
The Communications Assistance for Law Enforcement Act is a United States wiretapping law passed in 1994, during the presidency of Bill Clinton...
, or CALEA. After becoming an independent non-profit organization in November 2000, EPIC has continued to work on governmental issues: surveillance; transparency, using the Freedom of Information Act to publicize documents; and the security, verifiability, and privacy of electronic voting
Electronic voting
Electronic voting is a term encompassing several different types of voting, embracing both electronic means of casting a vote and electronic means of counting votes....
. It has also taken up the growing number of consumer privacy issues, such as identity theft, phone record security, medical record privacy, and commercial data mining
Data mining
Data mining , a relatively young and interdisciplinary field of computer science is the process of discovering new patterns from large data sets involving methods at the intersection of artificial intelligence, machine learning, statistics and database systems...
.

EPIC is registered as a non-profit Public Charity, and receives most of its funding from organizational and individual contributors, as well as through grants and the sale of its publications. 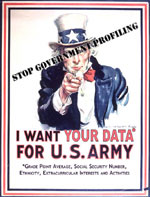 EPIC maintains and publishes its newsletter, the EPIC Alert, every two weeks.

Other publications include reports on internet privacy for web surfers, an analysis of industry self-regulation, and how Internet filtering software can block innocuous sites.

EPIC also maintains privacy.org, and the Privacy Coalition. In addition, EPIC coordinates the Public Voice coalition, launched in 1996 to promote public and NGO participation in decisions concerning the future of the Internet, as well as the National Committee for Voting Integrity, which was established to promote voter-verified balloting and to preserve privacy protections for elections in the United States.