A charged body cannot rest in stable equilibrium when placed in a pure electrostatic field or magnetostatic field. In these kinds of fields an unstable equilibrium condition exists. Although static fields cannot give stability, EMS works by continually altering the current sent to electromagnets to change the strength of the magnetic field and allows a stable levitation to occur. In EMS a feedback loop which continuously adjusts one or more electromagnets to correct the object's motion is used to cancel the instability.

Magnetic levitation technology is important because it reduces energy consumption, largely obviating friction. It also avoids wear
Wear
In materials science, wear is erosion or sideways displacement of material from its "derivative" and original position on a solid surface performed by the action of another surface....
and has very low maintenance requirements. The application of magnetic levitation is most commonly known for its role in Maglev trains.

Samuel Earnshaw
Samuel Earnshaw
Samuel Earnshaw was an English clergyman and mathematician, noted for his contributions to theoretical physics, especially "Earnshaw's Theorem"....
was the one to discover in 1839 that “a charged body placed in an electrostatic field cannot levitate at stable equilibrium under the influence of electric forces alone”. Likewise, due to limitations on permittivity
Permittivity
In electromagnetism, absolute permittivity is the measure of the resistance that is encountered when forming an electric field in a medium. In other words, permittivity is a measure of how an electric field affects, and is affected by, a dielectric medium. The permittivity of a medium describes how...
, stable suspension or levitation cannot be achieved in a static magnetic field with a system of permanent magnets or fixed current electromagnets. Braunbeck’s extension (1939) states that a system of permanent magnets must also contain diamagnetic material or a superconductor in order to obtain stable, static magnetic levitation or suspension.

Emile Bachelet applied Earnshaw's theorem
Earnshaw's theorem
Earnshaw's theorem states that a collection of point charges cannot be maintained in a stable stationary equilibrium configuration solely by the electrostatic interaction of the charges. This was first proven by British mathematician Samuel Earnshaw in 1842. It is usually referenced to magnetic...
and the Braunbeck extension and stabilized magnetic force by controlling current intensity and turning on and off power to the electromagnets at desired frequencies. He was awarded a patent in March 1912 for his “levitating transmitting apparatus” (patent no. 1,020,942). His invention was first intended to be applied to smaller mail carrying systems but the potential application to larger train-like vehicles is certainly apparent.

In 1934 Hermann Kemper was the one to apply Bachelet’s concept to the large scale, calling it “monorail vehicle with no wheels attached.” He obtained Reich Patent number 643316 for his invention and is also considered by many to be the inventor of maglev.

In 1979 the Transrapid
Transrapid
Transrapid is a German high-speed monorail train using magnetic levitation. Based on a patent from 1934, planning of the Transrapid system started in 1969. The test facility for the system in Emsland, Germany was completed in 1987...
electromagnetically suspended train carried passengers for a few months as a demonstration on a 908 m track in Hamburg
Hamburg
-History:The first historic name for the city was, according to Claudius Ptolemy's reports, Treva.But the city takes its modern name, Hamburg, from the first permanent building on the site, a castle whose construction was ordered by the Emperor Charlemagne in AD 808...
for the first International Transportation Exhibition (IVA 79).

The first commercial Maglev train for routine service was opened in Birmingham, England in 1984, using electromagnetic suspension, and a linear induction motor for propulsion.

Although a continuous supply of electric current is required to maintain a magnetic field in an electromagnet, this field is easily manipulated by changing the current in the wire. Therefore, electromagnets are much more practical than permanent magnets for levitation purposes. .

To reduce average power requirements, often the electromagnetic suspension is used only to stabilise the levitation, and the static lift against gravity is provided by a secondary permanent magnet system, often pulled towards a relatively inexpensive soft ferromagnetic material such iron or steel.

Maglev (Magnetic levitation) is a transportation system in which a vehicle is suspended on a guiding rail by the principle of electromagnetic suspension. Maglev has the advantages of being quieter and smoother than wheeled transportations due to the elimination of much of the physical contact between wheels and track. Since Maglev requires a guiding rail, it is mostly used in railed transport systems like trains.

After the first commercial Maglev train was opened in Birmingham
Birmingham
Birmingham is a city and metropolitan borough in the West Midlands of England. It is the most populous British city outside the capital London, with a population of 1,036,900 , and lies at the heart of the West Midlands conurbation, the second most populous urban area in the United Kingdom with a...
, England
England
England is a country that is part of the United Kingdom. It shares land borders with Scotland to the north and Wales to the west; the Irish Sea is to the north west, the Celtic Sea to the south west, with the North Sea to the east and the English Channel to the south separating it from continental...
in 1984, other Maglev train systems, such as JR-Maglev
JR-Maglev
JR-Maglev is a magnetic levitation train system developed by the Central Japan Railway Company and Railway Technical Research Institute . JR-Maglev MLX01 is one of the latest designs of a series of Maglev trains in development in Japan since the 1970s...
(Japan), M-Bahn
M-Bahn
The M-Bahn or Magnetbahn was an elevated Maglev train line operating in Berlin, Germany in 1991. The line was 1.6 km in length, and featured three stations, two of which were newly constructed...
(Germany), and the Transrapid
Transrapid
Transrapid is a German high-speed monorail train using magnetic levitation. Based on a patent from 1934, planning of the Transrapid system started in 1969. The test facility for the system in Emsland, Germany was completed in 1987...
system such as was used in the Shanghai Maglev Train
Shanghai Maglev Train
The Shanghai Maglev Train or Shanghai Transrapid is a magnetic levitation train, or maglev line that operates in Shanghai, China. It is the first commercially operated high-speed magnetic levitation line in the world...
(China), were developed over the past few decades. 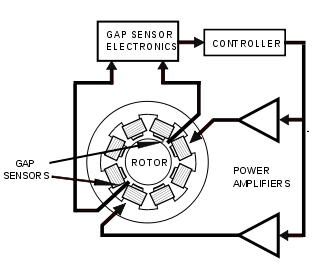 An active magnetic bearing (AMB) works on the principle of electromagnetic suspension and consists of an electromagnet
Electromagnet
An electromagnet is a type of magnet in which the magnetic field is produced by the flow of electric current. The magnetic field disappears when the current is turned off...
assembly, a set of power amplifiers which supply current to the electromagnets, a controller
Controller (control theory)
In control theory, a controller is a device which monitors and affects the operational conditions of a given dynamical system. The operational conditions are typically referred to as output variables of the system which can be affected by adjusting certain input variables...
, and gap sensors with associated electronics to provide the feedback required to control the position of the rotor within the gap. These elements are shown in the diagram. The power amplifiers supply equal bias current to two pairs of electromagnets on opposite sides of a rotor. This constant tug-of-war is mediated by the controller which offsets the bias current by equal but opposite perturbations of current as the rotor deviates by a small amount from its center position.

The gap sensors are usually inductive in nature and sense in a differential mode.
The power amplifiers in a modern commercial application are solid state devices which operate in a pulse width modulation (PWM) configuration. The controller is usually a microprocessor
Microprocessor
A microprocessor incorporates the functions of a computer's central processing unit on a single integrated circuit, or at most a few integrated circuits. It is a multipurpose, programmable device that accepts digital data as input, processes it according to instructions stored in its memory, and...
or DSP
Digital signal processor
A digital signal processor is a specialized microprocessor with an architecture optimized for the fast operational needs of digital signal processing.-Typical characteristics:...
.

NASA has been developing a launch aid using a magnetic levitation system to propel a spaceship. Maglev launch aid saves on design and launching costs, while providing a safer launching method.