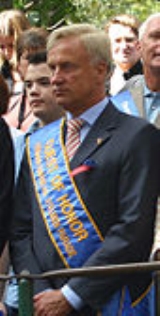 Encyclopedia
Carl-Friedrich Arp Ole Freiherr von Beust, generally called Ole von Beust, born April 13, 1955, in Hamburg
Hamburg
-History:The first historic name for the city was, according to Claudius Ptolemy's reports, Treva.But the city takes its modern name, Hamburg, from the first permanent building on the site, a castle whose construction was ordered by the Emperor Charlemagne in AD 808...
, Germany
Germany
Germany , officially the Federal Republic of Germany , is a federal parliamentary republic in Europe. The country consists of 16 states while the capital and largest city is Berlin. Germany covers an area of 357,021 km2 and has a largely temperate seasonal climate...
, was First Mayor of the city-state (Freie und Hansestadt) of Hamburg from 31 October 2001 to 25 August 2010, serving as President
President of the German Bundesrat
In Germany, the President of the Bundesrat or President of the Federal Council is the chairperson or speaker of the Bundesrat . The presidency of the Bundesrat rotates among the heads of government of each of the states on an annual basis...
of the Bundesrat
Bundesrat of Germany
The German Bundesrat is a legislative body that represents the sixteen Länder of Germany at the federal level...
from 1 November 2007 on for one year. He was succeeded as mayor by Christoph Ahlhaus.

He is the son of Achim Helge Freiherr von Beust and Hanna, née Wolff, who was considered half Jewish in Nazi Germany
Nazi Germany
Nazi Germany , also known as the Third Reich , but officially called German Reich from 1933 to 1943 and Greater German Reich from 26 June 1943 onward, is the name commonly used to refer to the state of Germany from 1933 to 1945, when it was a totalitarian dictatorship ruled by...
. Through his father he is a descendant of Saxon and Austrian statesman Count Friedrich Ferdinand von Beust.

In 1971 von Beust became member of the conservative Christian Democratic Union
Christian Democratic Union (Germany)
The Christian Democratic Union of Germany is a Christian democratic and conservative political party in Germany. It is regarded as on the centre-right of the German political spectrum...
(CDU). In 1973, after finishing high school, he worked for the CDU group in Hamburg's city-state parliament
Parliament
A parliament is a legislature, especially in those countries whose system of government is based on the Westminster system modeled after that of the United Kingdom. The name is derived from the French , the action of parler : a parlement is a discussion. The term came to mean a meeting at which...
("Bürgerschaft"), a position he held until he started to study law in 1975 at the University of Hamburg
University of Hamburg
The University of Hamburg is a university in Hamburg, Germany. It was founded on 28 March 1919 by Wilhelm Stern and others. It grew out of the previous Allgemeines Vorlesungswesen and the Kolonialinstitut as well as the Akademisches Gymnasium. There are around 38,000 students as of the start of...
. From 1977 until 1983 he was Hamburg president of the youth organisation of his party. Since 1978 Beust has been a member of the Hamburg city-state's parliament. In 1983 he successfully completed his studies and became an independent lawyer.

On 19 August 2003, Beust dismissed his vice-mayor Ronald Schill
Ronald Schill
Ronald Barnabas Schill is a former judge, the founder of the German political parties Partei Rechtsstaatlicher Offensive and Pro DM/Schill...
, causing a scandal. Beust had earlier dismissed Walter Wellinghausen, senator of the interior and Schill's most important official, without consulting Schill beforehand. This was due to public allegations of misconduct on Wellinghausen's part. In a private conversation, Schill then demanded that Beust take back the dismissal, allegedly using personal threats. Beust then decided to dismiss Schill as well.

In the (preassigned) press conference Schill held minutes after he had heard of his own dismissal, he spoke vaguely of "homosexual relationships", a "flat in an infamous hustler district" and "certain things happened that let one infer the occurrence of love acts" between Beust and Roger Kusch, who Beust had appointed minister (in German city-states "senator") of justice. Beust in turn stated that Schill threatened to make his alleged liaison with Kusch public under the premise that Beust intermingled public and private affairs. He said he had no sexual relationship with Kusch, that they merely knew each other for 25 years and were good friends, and that Beust was Kusch's landlord. "This is all – absolutely all", according to Beust.

His unprepared statement to the press quickly earned Schill an homophobic
Homophobia
Homophobia is a term used to refer to a range of negative attitudes and feelings towards lesbian, gay and in some cases bisexual, transgender people and behavior, although these are usually covered under other terms such as biphobia and transphobia. Definitions refer to irrational fear, with the...
reputation. A popular radio-station broadcast a song calling him "Mega-Proll" (mega redneck) and gay and lesbian associations protested vocally. Schill however later affirmed Beust's version of the story, except for the accusations of blackmail
Blackmail
In common usage, blackmail is a crime involving threats to reveal substantially true or false information about a person to the public, a family member, or associates unless a demand is met. It may be defined as coercion involving threats of physical harm, threat of criminal prosecution, or threats...
, saying that he warned Beust to stay clear of nepotism
Nepotism
Nepotism is favoritism granted to relatives regardless of merit. The word nepotism is from the Latin word nepos, nepotis , from which modern Romanian nepot and Italian nipote, "nephew" or "grandchild" are also descended....
, and that this had nothing to do with Beust's sexual orientation. He stated "I have nothing against homosexuals".

In a later interview, Beust's father confirmed that his son is indeed homosexual. Beust himself considers his sexual orientation a private matter; when asked directly he usually ironically refers the interviewer to his father.

The Hamburg elections of February 29, 2004
Hamburg state election, 2004
The Hamburg state election, 2004, was conducted on February 29, 2004, to elect members to the Hamburgische Bürgerschaft of Hamburg...
, ended with an unprecedented landslide victory for Ole von Beust and the CDU, with the party achieving absolute majority in the city-state's parliament. The CDU gained 47.2 percent of the vote, a full 21-point increase from the previous election in September 2001. This was the first time since 1993 the city-state has had only a single ruling party. In the Hamburg elections of February 24, 2008, the CDU gained 42.6 percent of the vote. Thus, the CDU continued to be the strongest party in Hamburg. However, since the CDU lost its absolute majority, it formed a coalition government with the Greens
Alliance '90/The Greens
Alliance '90/The Greens is a green political party in Germany, formed from the merger of the German Green Party and Alliance 90 in 1993. Its leaders are Claudia Roth and Cem Özdemir...
.

On July 18, 2010 Ole von Beust declared his resignation effective August 25. He was a finalist for the 2010 World Mayor
World Mayor
World Mayor is a biennial award organized by The City Mayors Foundation since 2004. It intends to raise the profile of mayors worldwide, as well as honour those who have served their communities well and who have contributed to the well-being of cities, nationally and internationally...
prize.