Encyclopedia
El Nuevo Herald is a McClatchy
The McClatchy Company
The McClatchy Company is a publicly traded American publishing company based in Sacramento, California. It operates 30 daily newspapers in 15 states and has an average weekday circulation of 2.2 million and Sunday circulation of 2.8 million...
newspaper
Newspaper
A newspaper is a scheduled publication containing news of current events, informative articles, diverse features and advertising. It usually is printed on relatively inexpensive, low-grade paper such as newsprint. By 2007, there were 6580 daily newspapers in the world selling 395 million copies a...
published daily in Spanish
Spanish language
Spanish , also known as Castilian , is a Romance language in the Ibero-Romance group that evolved from several languages and dialects in central-northern Iberia around the 9th century and gradually spread with the expansion of the Kingdom of Castile into central and southern Iberia during the...
in Miami, Florida
Miami, Florida
Miami is a city located on the Atlantic coast in southeastern Florida and the county seat of Miami-Dade County, the most populous county in Florida and the eighth-most populous county in the United States with a population of 2,500,625...
, in the United States
United States
The United States of America is a federal constitutional republic comprising fifty states and a federal district...
. El Nuevo Heralds sister paper is The Miami Herald
The Miami Herald
The Miami Herald is a daily newspaper owned by The McClatchy Company headquartered on Biscayne Bay in the Omni district of Downtown Miami, Florida, United States...
, also produced by the McClatchy Company. 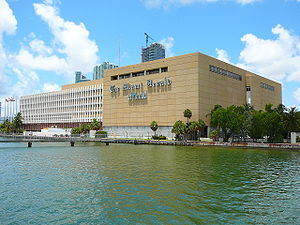 Founded: First published in 1975 as El Miami Herald; expanded and relaunched in 1987 as El Nuevo Herald; available as a standalone newspaper in 1998.

Market: The South Florida market is the primary market in the state of Florida with nearly 4.3 million residents and ranks as the 15th largest in the United States. It is the third-largest Hispanic market in the nation.

For daily newspapers, El Nuevo Herald is the United States' biggest Spanish-language Sunday paper and the second-largest daily. El Nuevo Herald carries an extraordinary sphere of influence in Latin America and the Caribbean for its groundbreaking news.

Customers: Hispanic readers in South Florida, the Caribbean and Latin America; web visitors from around the world.

On September 8, 2006, the publisher of the Miami Herald Jesús Díaz Jr., fired three El Nuevo Herald journalists because they freelanced for Radio/TV Marti
Radio Martí
Radio y Televisión Martí is a radio and television broadcaster based in Miami, Florida, financed by the United States government , which transmits Spanish radio broadcasts to Cuba...
, a U.S. Government News Agency
Independent agencies of the United States government
Independent agencies of the United States federal government are those agencies that exist outside of the federal executive departments...
. The three were Pablo Alfonso, Wilfredo Cancio Isla and Olga Connor. Less than a month later, Díaz was instructed by his superiors at The McClatchy Company
The McClatchy Company
The McClatchy Company is a publicly traded American publishing company based in Sacramento, California. It operates 30 daily newspapers in 15 states and has an average weekday circulation of 2.2 million and Sunday circulation of 2.8 million...
, the parent company of The Miami Herald and El Nuevo Herald, to re-hire the three journalist in question because they had prior approval to freelance for Radio/TV Marti from their supervisor at the time, El Nuevo Herald executive editor Humberto Castelló. Díaz resigned after reinstating the fired journalists.