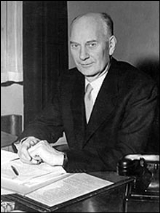 Encyclopedia
was a Norwegian
Norway
Norway , officially the Kingdom of Norway, is a Nordic unitary constitutional monarchy whose territory comprises the western portion of the Scandinavian Peninsula, Jan Mayen, and the Arctic archipelago of Svalbard and Bouvet Island. Norway has a total area of and a population of about 4.9 million...
politician from the Labour Party of Norway. He was Prime Minister
Prime Minister of Norway
The Prime Minister of Norway is the political leader of Norway and the Head of His Majesty's Government. The Prime Minister and Cabinet are collectively accountable for their policies and actions to the Sovereign, to Stortinget , to their political party, and ultimately the...
for three periods, 1945–1951, 1955–1963 and 1963–1965. With 17 years in office, he is the longest serving Prime Minister in Norway since the introduction of parliamentarism. Many Norwegians often refer to him as "Landsfaderen" (Father of the Fatherland)
Pater Patriae
Pater Patriae , also seen as Parens Patriae, is a Latin honorific meaning "Father of the Country," or more literally, "Father of the Fatherland".- Roman history :...
; he is generally considered one of the main architects of the rebuilding of Norway after World War II.

Einar Gerhardsen was born in the municipality of Asker
Asker
Asker is a municipality in Akershus county, Norway. It is part of the Viken traditional region. The administrative centre of the municipality is the village of Asker. The municipality is a suburb of Oslo, the national capital...
, in the county of Akershus
Akershus
- Geography :The county is conventionally divided into the traditional districts Follo and Romerike, which fill the vast part of the county, as well as the small exclave west of Oslo that consists of Asker and Bærum...
. His parents were Gerhard Olsen (1867–1949) and Emma Hansen (1872–1949). He was married to Werna and they had two sons Truls and Rune Gerhardsen
Rune Gerhardsen
Rune Gerhardsen is a Norwegian politician, representing the Norwegian Labour Party. He is son of Einar Gerhardsen.He chaired the Norwegian Skating Association from 1986 to 1990 and 2001 to 2003.-References:...
and a daughter Torgunn. His brother was Rolf Gerhardsen
Rolf Gerhardsen
Rolf Eilert Gerhardsen was a Norwegian journalist and influential cold warrior.He was born in Kristiania as a son of Gerhard Olsen and Emma Hansen...
and with him Einar Gerhardsen also had a lifelong working relationship.
From the age of 17, Gerhardsen went to meetings in the Labour party's youth movement.
Originally a road worker, Gerhardsen became politically active in the socialist labour movement during the 1920s. He was convicted several times of taking part in subversive activities until he, along with the rest of the Labour party, gradually moved from communism
Communism
Communism is a social, political and economic ideology that aims at the establishment of a classless, moneyless, revolutionary and stateless socialist society structured upon common ownership of the means of production...
to democratic socialism
Democratic socialism
Democratic socialism is a description used by various socialist movements and organizations to emphasize the democratic character of their political orientation...
. He participated in the Left Communist Youth League
Left Communist Youth League
Left Communist Youth League was the youth organization of the Norwegian Labour Party from 1923-1927. VKU published Den røde ungdom...
's military strike
Military strike
A military strike is a limited attack on a specified target. Strikes are used, amongst other things, to render facilities inoperable , to assassinate enemy leaders, and to limit supply to enemy troops. A strike can often be the prelude to a war or siege, whose initial strike is for a strategic or...
action of 1924. He was convicted for assisting in this crime and sentenced to 75 days of prison.

By the middle of the 1930s Labour was a major force on the national political scene, with Gerhardsen as the Mayor of Oslo and Johan Nygaardsvold
Johan Nygaardsvold
Johan Nygaardsvold was a Norwegian politician from the Labour Party. He was Prime Minister of Norway from 1935 to 1945 , as head of the cabinet Nygaardsvold.-Political career:...
as Prime Minister of a minority cabinet. During World War II, Gerhardsen took part in the organised resistance against Nazi occupation and was arrested on 11 September 1941 and interned in concentration camps at Grini in Norway and at Sachsenhausen
Sachsenhausen concentration camp
Sachsenhausen or Sachsenhausen-Oranienburg was a Nazi concentration camp in Oranienburg, Germany, used primarily for political prisoners from 1936 to the end of the Third Reich in May, 1945. After World War II, when Oranienburg was in the Soviet Occupation Zone, the structure was used as an NKVD...
in Germany in August, 1944. After the war, Gerhardsen formed the interim government which sat from the end of the occupation in May 1945 until the elections held in October the same year. The elections gave Labour an absolute majority in Parliament, the Storting, which it retained until 1961. Gerhardsen served as President of the Storting from January 10, 1954 to January 22, 1955.

During and after his periods in office he was greatly respected by the people, even those not sharing his social democratic views. The administrations he led forged an eclectic economic policy in which government regulation of commerce, industry and banking was combined with market economics. Abject poverty and unemployment were sharply reduced by his government's policies of industrialisation
Industrialisation
Industrialization is the process of social and economic change that transforms a human group from an agrarian society into an industrial one...
and redistribution of wealth through progressive taxation, together with the creation of a comprehensive social security system. In foreign policy, he aligned Norway with the Western powers at the end of the 1940s after some initial hesitation within the governing party, and Norway became a founding member of NATO.

Documents from 1958 reveal that the Gerhardsen's government knew that Israel was going to use heavy water supplied by Noratom for plutonium production, making it possible for Israel to produce nuclear weapons.

In November 1962 an accident in which several miners died occurred in the Kings Bay
Kings Bay Affair
The Kings Bay Affair was a political issue in Norway that reached its apex in 1963 and brought down the government of Einar Gerhardsen and formed the basis for non-socialist coalition politics in Norway that persisted to the end of the 20th century....
coal mine on Spitsbergen
Spitsbergen
Spitsbergen is the largest and only permanently populated island of the Svalbard archipelago in Norway. Constituting the western-most bulk of the archipelago, it borders the Arctic Ocean, the Norwegian Sea and the Greenland Sea...
in the Svalbard
Svalbard
Svalbard is an archipelago in the Arctic, constituting the northernmost part of Norway. It is located north of mainland Europe, midway between mainland Norway and the North Pole. The group of islands range from 74° to 81° north latitude , and from 10° to 35° east longitude. Spitsbergen is the...
archipelago. In the aftermath, the Gerhardsen government was accused of not complying with laws enacted by parliament. In the summer of 1963 a vote of no confidence passed with the support of the Socialist People's Party
Socialist Left Party (Norway)
The Socialist Left Party or SV, is a Norwegian left-wing political party. At one point one of the smallest parties in Parliament, it became the fourth-largest political party in Norway for the first time in the 2001 parliamentary election, and has been so ever since...
and a centre-right minority coalition government was formed, under John Lyng
John Lyng
was a Norwegian politician from the Conservative Party. He was Prime Minister of Norway from 28 August to 25 September 1963 in a coalition government consisting of the Conservative, Centre, Christian Democratic, and Liberal parties.He was originally a member of the Liberal Left Party, heading the...
. Although this new government lasted only three weeks, until the Socialist People's Party realigned itself with Labour, it formed the basis for an opposition victory under the leadership of Per Borten
Per Borten
was a Norwegian politician from the Centre Party and Prime Minister of Norway from 1965 to 1971. Per Borten is credited for leading the modernization of what was then named Bondepartiet into today's Centre Party...
at the 1965 elections. Gerhardsen retired from national politics in 1969 but continued to influence public opinion through writing and speeches.