Encyclopedia
Eilbek is a quarter of the German city of Hamburg
Hamburg
-History:The first historic name for the city was, according to Claudius Ptolemy's reports, Treva.But the city takes its modern name, Hamburg, from the first permanent building on the site, a castle whose construction was ordered by the Emperor Charlemagne in AD 808...
and part of the Wandsbek
Wandsbek
Wandsbek is the second-largest of seven boroughs that make up the city of Hamburg, Germany. The name of the district is derived from the river Wandse which passes here. The quarter Wandsbek, which is the former independent city, is urban and, with the quarters Eilbek and Marienthal part of the...
borough. It originated as an independent small village on the outskirts of Hamburg and was eventually incorporated when the city expanded. In 2006 the population was 20,265.

The village was named after a small river of the same name. 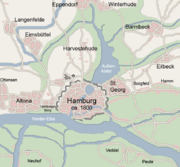 During a great fire in Hamburg Mai 5 to May 8 1844 the center of Hamburg was destroyed. Some of the people from Hamburg-Alstadt settled in Ylenbeke.

In the Second World War Eilbek was almost completely destroyed by the heavy air raids in July 1943 (codenamed: Operation Gomorrah
Bombing of Hamburg in World War II
The Allied bombing of Hamburg during World War II included numerous strategic bombing missions and diversion/nuisance raids. As a large port and industrial center, Hamburg's shipyards, U-boat pens, and the Hamburg-Harburg area oil refineries were attacked throughout the war...
). With the reorganisation of Hamburg in the year 1949 Eilbek became a part of Wandsbek.

There were 3 elementary schools and 1 secondary school in the quarter Eilbek and 38 physicians in private practice and 5 pharmacies.

The Bundesstraße 75
Bundesstraße 75
The Bundesstraße 75 is a German federal highway running in a northeast to southwest direction from the Lübeck borough of Travemünde to Delmenhorst near Bremen....
leads through the quarter, connecting the city Lübeck
Lübeck
The Hanseatic City of Lübeck is the second-largest city in Schleswig-Holstein, in northern Germany, and one of the major ports of Germany. It was for several centuries the "capital" of the Hanseatic League and, because of its Brick Gothic architectural heritage, is listed by UNESCO as a World...
in the North with Delmenhorst
Delmenhorst
Delmenhorst is an urban district in Lower Saxony, Germany. It has a population of 74,500 and is located 10 km/6 miles west of downtown Bremen with which it forms a contiguous urban area, whereas the city of Oldenburg is 25 km/15 miles to the northwest. The city has a total area of 62.36 km²...
in Lower Saxony
Lower Saxony
Lower Saxony is a German state situated in north-western Germany and is second in area and fourth in population among the sixteen states of Germany...
. According to the Department of Motor Vehicles (Kraftfahrt-Bundesamt), 6,560 private cars were registered (328 cars/1000 people) in Eilbek.
The source of this article is wikipedia, the free encyclopedia.  The text of this article is licensed under the GFDL.