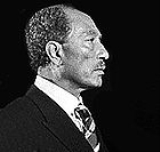 Overview
Muhammad Anwar al-Sadat was the third President of Egypt
President of Egypt
The President of the Arab Republic of Egypt is the head of state of Egypt.Under the Constitution of Egypt, the president is also the supreme commander of the armed forces and head of the executive branch of the Egyptian government....
, serving from 15 October 1970 until his assassination by fundamentalist army officers on 6 October 1981. In his eleven years as president he changed Egypt's
Egypt
Egypt , officially the Arab Republic of Egypt, Arabic: , is a country mainly in North Africa, with the Sinai Peninsula forming a land bridge in Southwest Asia. Egypt is thus a transcontinental country, and a major power in Africa, the Mediterranean Basin, the Middle East and the Muslim world...
direction, departing from some of the economic and political principles of Nasserism
Nasserism
Nasserism is an Arab nationalist political ideology based on the thinking of the former Egyptian President Gamal Abdel Nasser. It was a major influence on pan-Arab politics in the 1950s and 1960s, and continues to have significant resonance throughout the Arab World to this day. It also...
by re-instituting the multi-party system, and launching the Infitah
Infitah
The Infitah was Egyptian President Anwar Sadat's policy of "opening the door" to private investment in Egypt in the years following the 1973 October War with Israel...
economic policy.

1978    U.S. President Jimmy Carter, President Anwar Sadat of Egypt, and Prime Minister Menachem Begin of Israel meet at Camp David and agree on the Camp David Accords a framework for peace between Israel and Egypt and a comprehensive peace in the Middle East.