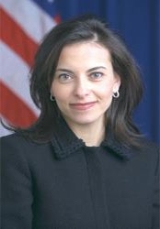 Encyclopedia
Egyptian Americans are Americans of Egyptian
Egyptians
Egyptians are nation an ethnic group made up of Mediterranean North Africans, the indigenous people of Egypt.Egyptian identity is closely tied to geography. The population of Egypt is concentrated in the lower Nile Valley, the small strip of cultivable land stretching from the First Cataract to...
ancestry, first-generation Egypt
Egypt
Egypt , officially the Arab Republic of Egypt, Arabic: , is a country mainly in North Africa, with the Sinai Peninsula forming a land bridge in Southwest Asia. Egypt is thus a transcontinental country, and a major power in Africa, the Mediterranean Basin, the Middle East and the Muslim world...
ian immigrants, or descendants of Egyptians who immigrated to the United States
United States
The United States of America is a federal constitutional republic comprising fifty states and a federal district...
. In the 2007 U.S. census, the number of people with Egyptian ancestry was estimated at 195,000, although some estimates range from several hundred thousand to 2 million. The large majority of Egyptians in the U.S. are Coptic Orthodox Christians . A large community of Egyptian Americans is located in northeastern Virginia
Virginia
The Commonwealth of Virginia , is a U.S. state on the Atlantic Coast of the Southern United States. Virginia is nicknamed the "Old Dominion" and sometimes the "Mother of Presidents" after the eight U.S. presidents born there...
and the Washington, DC, metropolitan area. Other Egyptian American communities are concentrated in Jersey City, New Jersey
Jersey City, New Jersey
Jersey City is the seat of Hudson County, New Jersey, United States.Part of the New York metropolitan area, Jersey City lies between the Hudson River and Upper New York Bay across from Lower Manhattan and the Hackensack River and Newark Bay...
; Levittown, New York
Levittown, New York
Levittown is a hamlet in the Town of Hempstead located on Long Island in Nassau County, New York. Levittown is midway between the villages of Hempstead and Farmingdale. As of the 2010 census, the CDP had a total population of 51,881....
; Steinway Village
Astoria, Queens
Astoria is a neighborhood in the northwestern corner of the borough of Queens in New York City. Located in Community Board 1, Astoria is bounded by the East River and is adjacent to three other Queens neighborhoods: Long Island City, Sunnyside , and Woodside...
in Queens, New York; Bay Ridge in Brooklyn, New York; as well as in California
California
California is a state located on the West Coast of the United States. It is by far the most populous U.S. state, and the third-largest by land area...
, mainly in and around the Los Angeles
Los Ángeles
Los Ángeles is the capital of the province of Biobío, in the commune of the same name, in Region VIII , in the center-south of Chile. It is located between the Laja and Biobío rivers. The population is 123,445 inhabitants...
and San Francisco metropolitan areas, parts of Florida
Florida
Florida is a state in the southeastern United States, located on the nation's Atlantic and Gulf coasts. It is bordered to the west by the Gulf of Mexico, to the north by Alabama and Georgia and to the east by the Atlantic Ocean. With a population of 18,801,310 as measured by the 2010 census, it...
and, increasingly, Philadelphia.